Broo View: History tells us the Tri-State will have at least one state football champion this year 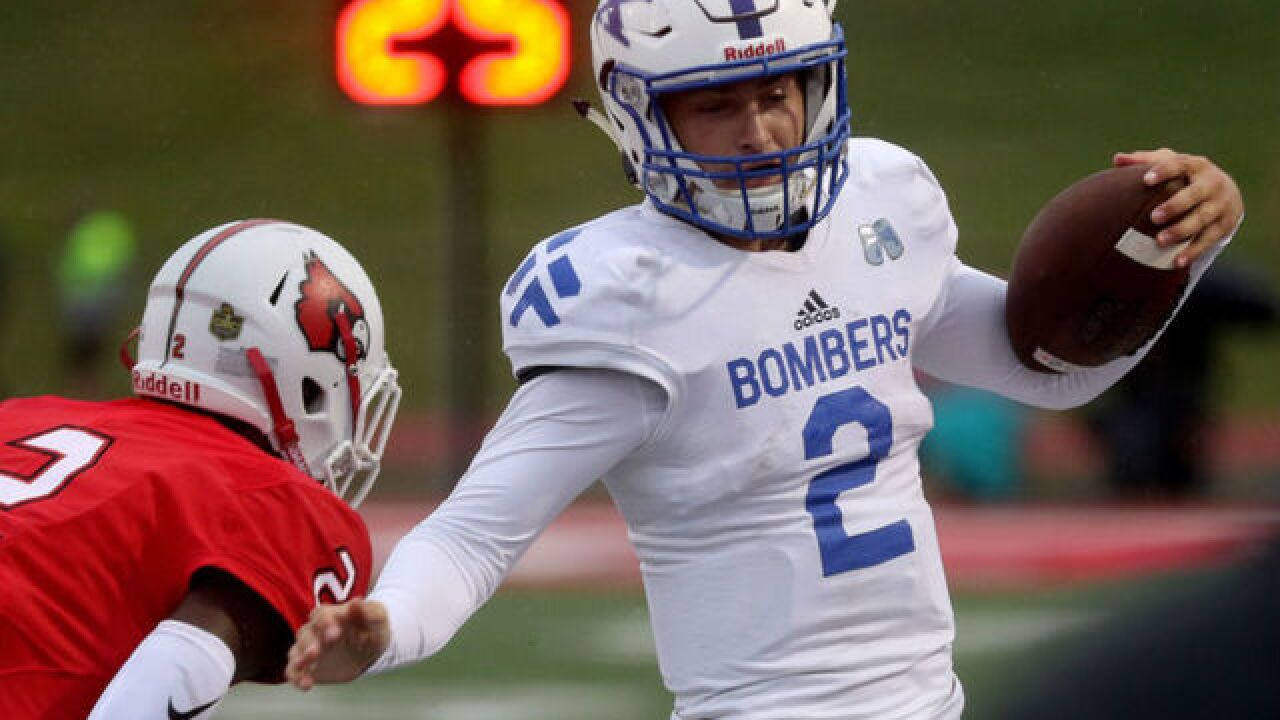 Copyright 2017 Scripps Media, Inc. All rights reserved. This material may not be published, broadcast, rewritten, or redistributed.
WCPO | file
<p>St. Xavier quarterback Chase Wolf tries to elude a Colerain defender in the Bombers' 20-17 overtime victory in 2017. Wolf has moved on to play for Wisconsin, but both St. Xavier and Colerain look to be strong this season.</p>

Depending on where you are and who you root for, the high school football season is either about to begin or it's already off and running.

History tells us the Tri-State will have at least one state football champion come December. And, with Ohio not having a state champ since 2016, that side of the river is due.

Last year, it was Winton Woods that rolled to the Ohio Division II title game before falling to Hoban.  The Warriors are coming off of a 13-2 season, and their coach thinks all things are possible for his team again this season.

"We lost a bunch of talented seniors from last year’s team that are preparing to help their respective universities right now," Warriors head coach Andre Parker told me. "Our challenge will be leadership and paying attention to detail. If we continue to get better as the season goes on, we can have a very special season. We should be very fun to watch because we are very explosive at every position."

The Warriors begin their 2018 journey Friday night against Trotwood Madison.

Meantime, in Kentucky, the Covington Catholic Colonels are off and running. They won their season opener last Friday night, bouncing Ryle 40-7. CovCath won the Kentucky 5A Championship last December. Head coach Eddie Eviston is back for another season.

"We have to realize and embrace that we are a completely different team than last year,” Eviston said.

Last season, CovCath went 15-0. The closest any opponent got to the Colonels was 31 points. But gone among other seniors on that team is starting quarterback A.J. Mayer, who signed to play at Miami University.  He was also an integral part of the Colonels Kentucky State basketball championship team.

"We are expecting new leaders to emerge and work diligently to keep our expectations of a very high standard in all aspects of our football program," Eviston said. "We have a good nucleus of returning starters who we expect to lead us and who we expect to guide our young guys along."

I asked Eviston who he thought was the best high school football player in Northern Kentucky.  He admits bias, but believes it's Cov Cath's Michael Mayer, A.J's brother, who is a junior tight end and linebacker. Michael Mayer has verbally committed to play college football at Notre Dame.

Back in Ohio, one of the more pronounced turnarounds came in last season by Milford. The Eagles had fallen on hard football times, until the venerable Tom Grippa arrived. Architect of turnarounds at LaSalle, Fairfield and Elder , Grippa arrived with a new attitude and system, and it paid off. Milford made the Ohio playoffs for the first time since 1986. Grippa told me he believes his team has a chance to win its conference, the ECC, this season. He says there's a good reason why.

"If there is a better receiver than Dylan Hughes I would like to see him,” Grippa said. “Dylan has had an excellent camp and he is a Division 1 receiver."

But winning the ECC won't be easy for the Eagles.

At Anderson, the Redskins have one of the best offensive linemen in the nation in senior Zeke Corell. The Walnut Hills Eagles have, in defensive lineman Jowon Briggs, one of the best at that position. Both will play in the annual Under Armour All-America game this January.

Almost universally, football coaches I've spoken with this summer answer the question of which team in Southwest Ohio is the best with "Colerain." Tom Bolden has crafted a perennial powerhouse. If you're looking for a coach who downplays his team, you've got the wrong guy in Bolden. He told me the expectation at Colerain is to win every game this season.

"It's not arrogance. It's just what we believe we will do if we stay healthy and take care of the football,” Bolden said.

There is a major reason why Bolden can say that. The Cardinals return 14 starters from a team that went 11-3 and made it to the Ohio Division I state championship game, and that was a team that lost its first two games of the season. A lot of the Cardinals offense this season will fall on the broad shoulders of Ivan Pace Jr., who is a punishing running back.

"He's 222 pounds of athleticism and can do whatever we ask of him," Bolden boasts. Colerain opens the season in the Crosstown Showdown Friday night against La Salle.

RELATED:  Colerain and St. Xavier are among the nation's top 10 high school football programs since 2003

Add Mason's Brian Castner to the list of Colerain believers. His Comets have to deal with the Cardinals every season in the Great Miami Conference.

"Colerain is still the team to beat in city, GMC and the most talented team," he said.

But Castner's Comets are coming off a strong season, too. Last year, Mason made the Ohio Division I state playoffs before losing to, yep, Colerain. Still, Castner sees potential in his current team.

"Our 2018 team ... is a group of young men that get along really, really well, but they lack Friday night experience," the Mason coach told me. "We hope early in the year we can manage the lack of experience through our great team chemistry that we feel we have."

Maybe the most interesting team in Ohio will be Moeller. Longtime head coach John Rodenberg decided to resign this past winter and took the head coaching job at Lawrence Central in Indiana. The new Moeller coach, Doug Rosfeld, a Moeller grad, was a former Crusaders assistant coach and University of Cincinnati player development coach. He was an assistant under Rodenberg the last time the Crusaders won a state title, in 2013.

RELATED:  The elimination of the varsity high school football kickoff in Ohio may be inevitable

Rosfeld likes his team, but during training camp, he's also seen a lot of other talented teams.

"We scrimmaged Princeton, Colerain and West Clermont, three fast and physical teams," Rosfeld said. "I would be surprised if we don’t see a late playoff run from a couple of those programs."

Rosfeld also handicapped the individual talent in the Greater Cincinnati area, particularly on the Ohio side of the river.

"Some of the most impressive players I have seen in the GCL and the city are linemen," said Rosfeld, who should know. He played the position at Moeller and later at the University of Cincinnati.

"Our captain, Zach Carpenter, is an impressive football player. Paris Johnson at X, Zeke Correll at Anderson, Joe Oakes at Indian Hill and Jakob James at Elder are all great linemen. Connor Foster at Milford is a great TE."

And then, of course, there's perennial powerhouse St Xavier.

Yes, the Bombers won't have quarterback Chase Wolf, who's off to Wisconsin, where he could start sooner than later for the Badgers. But look at what the Bombers have returning from last year's 11-2 playoff team. By the way, the Bombers have been to the Ohio Division I playoffs nine years in a row.

St. Xavier has 10 returning starters. Both sides of the line look strong. With running back Chris Payne healthy again for his senior season, ball control could be the game plan on the offensive side of things, even more so with Wolf gone.

Potential also abounds this season at Newport Central Catholic. So, it's no small reason why head coach Stephen Lickert is high on his team.

"We have guys that can score from anywhere on the field, at every skill position, and the guys up front are athletic, tough and physical," Lickert said. The Thoroughbreds are off and running after a 41-0 win over Scott in their opener.

"Our defense is fast, physical and disciplined. Our expectation at NewCath is to win the district, win the region and win the 2A state title."

Next up for NewCath is Friday night's game at Cooper. The Jaguars will be looking for a rebound game. Cooper lost its opener at Highlands last Friday, 36-7.

Randy Borchers is the Jaguars head coach. His Jags won only twice last season, after going 7-5 and winning a playoff game in 2016. Borchers sees daylight now, particularly with sophomore quarterback Jeremiah Lee returning. Lee ran for over 500 yards and threw for another 600 in 2017. He is clearly the Jags' playmaker.

At Ryle, head coach Mike Engler thinks this year could be special for his Raiders.

"We are young and inexperienced at some positions," Engler said. "But they are working hard to get better. I really think we'll be really good come playoff time. This team is fun to coach, and they are really enthusiastic about learning and getting better."

Last year, Ryle went 8-3. After losing their opener last Friday to CovCath, 40-7, the Raiders will be looking for a rebound win this Friday night at Lexington Catholic.

And so it begins. What began in the heat of summer will end on the edge of winter, when, history tells us, at least one of our teams will be hoisting a trophy. And the adventure we're embarking on now will, eventually, lead us to exactly who that will be.

WCPO will have scores and highlights online and on air every Friday night during our Friday Football Frenzy coverage at 11 p.m.