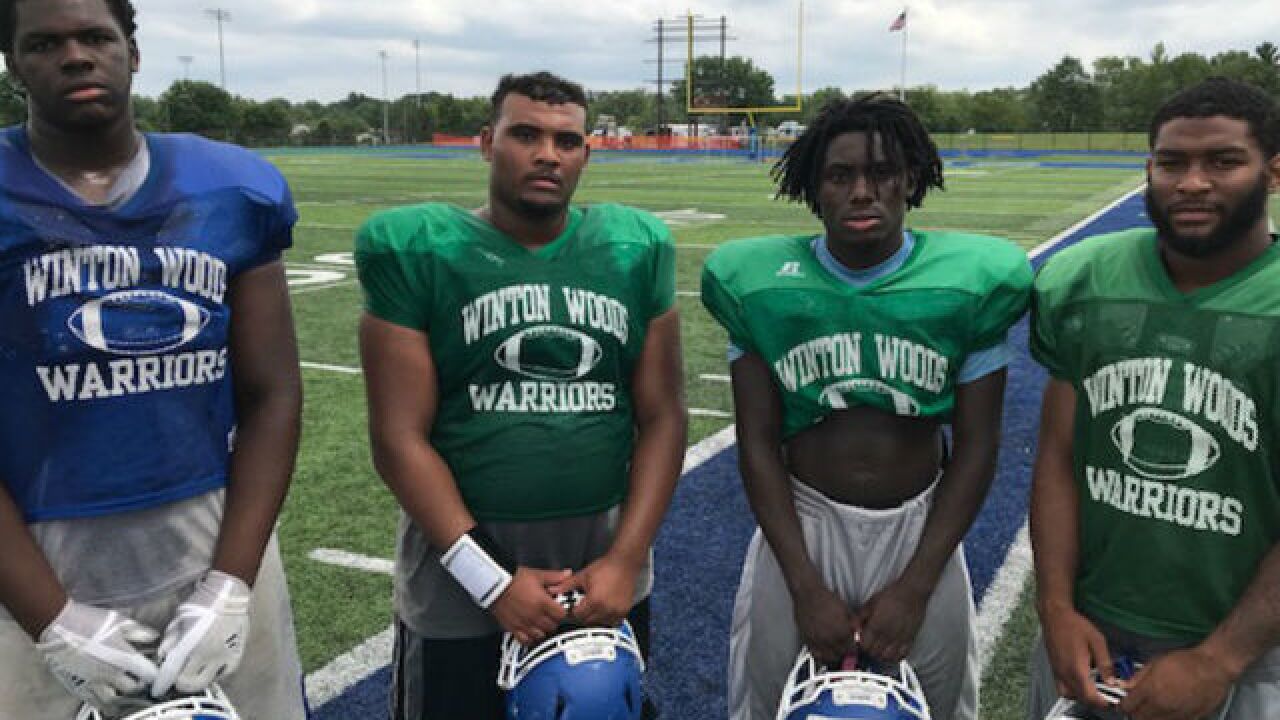 FOREST PARK, Ohio – Winton Woods senior RaeQuan Prince and his teammates had a common topic of conversation each day of practice this summer.

They want to return to the state final in Canton in a couple of months. And there are plenty of reminders of that goal.

“I think they’re hungry because of what happened,” Winton Woods coach Andre Parker said. “We didn’t finish the season. It wasn’t a close game, and we didn’t play our best. Ever since we got back that’s been our focus.”

Winton Woods (13-2 in 2017), an independent without conference affiliation since the 2012-13 school year, earned its second state finals appearance in program history after it won the 2009 Division II state title. The Warriors want another state title this year.

“People talk about how we went to state,” said junior running back Miyan Williams. “It isn’t easy going back-to-back to state. So we have to work hard. That’s where we want to go this year.”

The Warriors’ schedule isn’t for the faint of heart as multiple playoff teams await.

“We can get better every day,” Parker said. “We have a high very ceiling. A lot of green guys and a lot of guys with a lot of stuff to learn. They’re eager to learn. I think they are willing to try really hard.”

Winton Woods opens the season Aug. 24 in the Skyline Chili Crosstown Showdown against visiting Trotwood-Madison (15-0 in 2017) at Charlie Fredrick Stadium.

The game against the reigning Division III state champion Rams is the first of a two-year deal that could eventually become a four-year agreement.

“Honestly we wouldn’t have it any other way,” Parker said. “We’re accustomed to it. We would like to know where we are. We like to play the best.”

The Warriors then host West Clermont, a playoff team in 2017 during its first year as a program, before three consecutive road games including at Upper Arlington and at Thurgood Marshall. In October, Winton Woods has road games against Greater Catholic League South division powers Elder and Moeller.

Winton Woods lost 21 seniors to graduation, but returns plenty of talented players like senior Prince, a slot receiver who can play quarterback if needed.

Junior left tackle/nose tackle Brendon Lowry and junior running back Miyan Williams are a three-year starters. Williams rushed for 1,220 yards and 15 touchdowns in the 2017 regular season.

Booker, ranked the state’s No. 44 player overall in the 2019 class by 247Sports, said he’s ready to make a significant impact after injury shortened his regular season during his junior year.

The Warriors can’t wait to take the field, he said.

“We’ve got unfinished business to handle,” Booker said. So we are going to take care of it this year.”