For the Elder High School football program, a year of redemption could be ahead 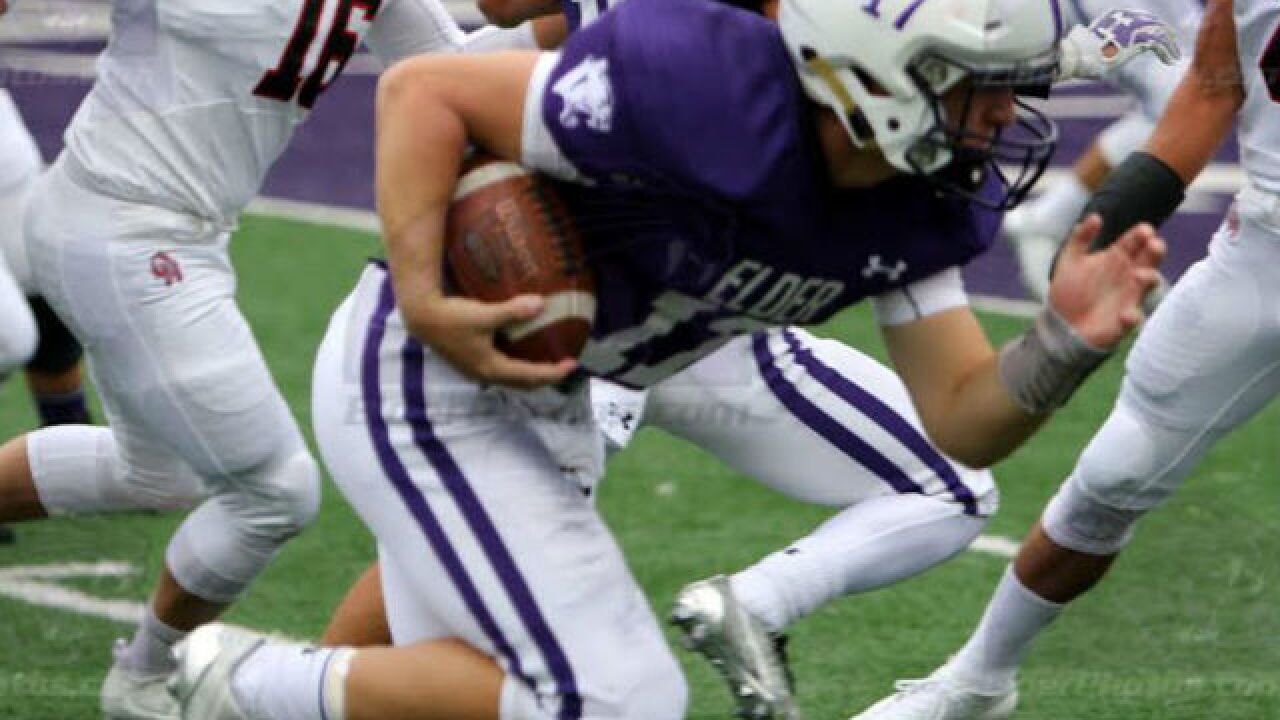 Copyright 2018 Scripps Media, Inc. All rights reserved. This material may not be published, broadcast, rewritten, or redistributed.
<p>Elder senior quarterback Michael Bittner threw for 893 yards and seven touchdowns and rushed for 466 yards and 11 touchdowns as a junior. (Photo by Kevin Welch/Elder High School Sports)</p>

CINCINNATI – Michael Bittner admits Spencer Bono and Kyle Trischler didn’t care for him that much in grade school.

Bittner attended Our Lady of the Visitation School while Bono and Trischler went to St. Jude Parish School. Grade-school rivalries can be that way.

But when they entered Elder High School as freshmen in 2015, everything changed. The Elder trio became close friends.

“We have a lot of experienced players and I think that’s huge,” Elder coach Doug Ramsey said.

Those players are among a very talented Panthers’ squad with seven home games at The Pit. The Oct. 5 game against Moeller is at Nippert Stadium as part of the Skyline Chili Crosstown Showdown .

“It’s kind of a redemption year for us,” said Bittner, the senior quarterback. “We want to get Elder back to where it’s supposed to be.”

Bittner, listed at 6 feet 2 and 215 pounds, is poised to be that positive agent for the Panthers when the season starts Aug. 24 against visiting Gahanna Lincoln.

“He’s got such a strong arm,” Ramsey said. “Of all the guys I’ve coached he’s up there with arm strength. And he’s a good runner.”

Bittner is a three-year player in various positions – whether in the Wildcat as a sophomore, at quarterback, Wildcat or wide receiver as a junior and now as the starting quarterback as a senior. He's a physical runner and has the ability to stay or move out of the pocket.

“I think the one thing is his complete understanding of what we’re doing,” Ramsey said. “He is light years ahead of last year because he knows where to go with the ball and he knows what to do. Last year, there was a little hesitation. Now, he’s much more comfortable with what we’re doing.”

Bittner is a three-sport athlete. He enjoys basketball and grew up with baseball as probably his favorite sport. He can’t imagine any one of the three sports not in his life.

“I love each and every game,” Bittner said. “People always ask me what’s your favorite sport? I say whatever season I am in that’s my favorite sport.”

So Bittner is quick to take advantage of any opportunity to practice with his teammates.

Earlier this year, he and Trischler – both of whom live in Cleves - met up at Taylor High School to work on up-tempo route running, timing and conditioning.

“I seem to always know where Kyle is at because you have to because you know he’s always going to give the defender his best move and he’s going to get open,” Bittner said. “He’s just so quick and he’s so smart with his routes. So he’s easy to be your favorite target to throw to that’s for sure.”

“When you come in here as sophomores you are freaking out; it’s all so fast,” Trischler said. “And then once you get there mentally I know what Michael is going to do on whatever route it is and when I am going to bend-off he knows what I am going to do. Everybody is together and is in sync.”

Ramsey admits he’ll have to adjust his play-calling a bit in 2019 because Trischler knows so much about the offense.

“He’s caught 60-plus balls the first two years he’s played,” Ramsey said. “I think right now he’s way better than he was last year. He just works so hard at it. “

Trischler said the Panthers are “light years ahead” mentally from last season. Although he was happy with his stat line of receptions, Trischler said it’s all about the team and making the postseason.

“I wish we could’ve gotten to the playoffs and won some more games,” Trischler said. “That’s ultimately the goal so whatever it takes to get there.”

Bono, rated the state’s No. 27 player overall in the 2019 class by 247Sports , said the seniors have made a significant impact on this team entering the season. Like his teammates, he can't wait to play under the lights at The Pit.

“I just think our team camaraderie this year is really, really good,” Bono said. “Everyone gets along. We don’t really have any weaknesses I don’t think. All 22 players are all really good. From our O-line to our DBs, I really don’t see any weaknesses.”