9 things 2017 taught us about getting around in Cincinnati 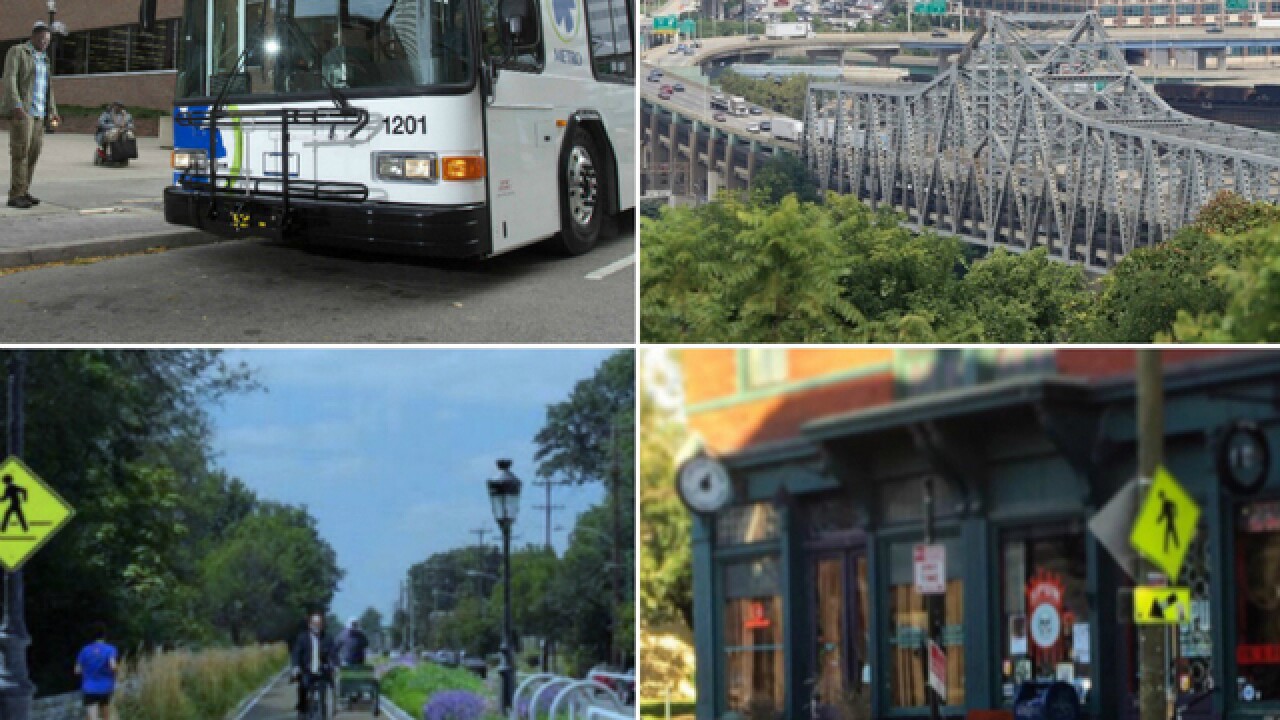 CINCINNATI -- It's been a big year for the region's infrastructure.

It was the streetcar's first full year. Cincinnati Metro's bus service continued to feel a budget pinch. Progress was made on multiple bike trails. A debate broiled over whether government should help out with a new stadium. Cincinnati and Hamilton County both found money for a new Western Hills Viaduct -- even though there's still no plan to pay for a new Brent Spence Bridge.

This year also wrapped up with a major shake up in the transit authority's leadership.

Here's a closer look at some of the biggest transportation stories of 2017, as well as a preview of what to look forward to next year:

Cincinnati Metro -- the region's bus service operated by the Southwest Ohio Regional Transit Authority -- is staring down the barrel of a $150 million budget shortfall over roughly the next decade. SORTA formed a task force in 2015 to create a plan to find a new, permanent source of funding to fill that gap.

SORTA's board of trustees voted in June to put a measure on the 2018 ballot that would enact a new sales tax in Hamilton County. Dwight Ferrell, Metro's CEO and president, told the trustees in a December board meeting that a .5-percent sales tax would only maintain current service levels and still result in a $30 million deficit by 2028.

Ferrell presented six sales tax options, up to a 1-percent option. That would include four bus rapid transit routes, which would designate a lane of traffic specifically to bus travel. Each plan would include "modest" fare increases on an annual basis.

The SORTA board plans to decide which option they will present to voters in early 2018.

Hamilton County voters have weighed a transit sales tax levy three time, and have never approved one. Hamilton County is the only county in Ohio that does not use a sales tax to finance a major metropolitan transit system.

Probably the biggest impact Metro's budget woes will have is cuts to multiple routes.

Routes 1, 28 and 50 saw restructuring in late 2017, meaning reduced frequency of service, and cuts to other routes could be coming in 2018.

A WCPO I-Team investigation found that Metro's ridership was lopsided, with some routes seeing over-packed buses while others were seeing hardly any at all.

"It seems ridiculous that we've gotten to this point," Mark Samaan said. He analyzes ridership data for the Better Bus Coalition, a grassroots group of advocates pushing for improved bus service. He attributes Metro's service shortcomings to the region's changing landscape when it comes to jobs. When the city became a key player in funding Metro's bus operations -- rewind to 1973 -- Downtown was the epicenter for job growth.

The 2017 race for mayor and city council seats included a lot of transportation discussion, but one subject was conspicuously absent from debate: the streetcar.

Both re-elected incumbent John Cranley and challenger Yvette Simpson spoke at length about the the region's beleaguered bus service -- and pledged to make change -- but shied away from discussing whether the streetcar should expand up the hill toward Uptown.

Not only was the streetcar a hot potato during the 2013 election -- Cranley campaigned on shutting the project down -- but its first year of operation was checkered with problems -- some expected, some not. So it's no surprise the election didn't include much discussion of the streetcar.

Among the issues that persisted were consistently faulty ticket vending machines, inaccurate arrival time displays and traffic congestion slowing down the streetcar's progress through Over-the-Rhine and Downtown.

Late in the year, SORTA board member Gary Greenburg moved the transit authority sever its ties with the streetcar, for which it oversees operations. The board voted to uphold its contract with the city and continue managing the streetcar.

READ MORE: One year in, what streetcar lessons have we learned?

According to records WCPO obtained earlier in December, SORTA board chairman Jason Dunn and vice chairman Kenneth Reed submitted their letters of resignation to city and county leaders.

Both were serving terms set to expire in January 2018, but neither opted to continue in their roles overseeing the transit agency.

This was Dunn's second three-year term on the board, through which he saw the birth of Cincinnati's streetcar and a decline in bus ridership and funding. Dunn was also on the board that hired the agency's top officer, Ferrell.

With a sales tax levy battle looming in 2018, it remains to be seen who will step into these leadership roles, and what impact the change could have.

The streetcar's struggle to move through Over-the-Rhine and Downtown traffic prompted city leaders to approve a traffic signal timing study in the two urban core neighborhoods.

The Department of Transportation and Engineering initiated the study this fall, and expects to present findings to City Council in the spring of 2018.

It will be the first in-depth look at how traffic lights and pedestrian signals are timed in more than 20 years. Metropolitan cities typically conduct such studies once every five or 10 years. Council member Amy Murray, who heads up the city's transportation committee, said, "We are way behind on this," when Council approved the $300,000 study late in 2016.

Leaders identified south-bound Walnut Street as particularly problematic, and not just for the streetcar.

"We know we have some issues with that corridor on Walnut Street, south of the library," said Council member Simpson, as Council was weighing the proposed study.

The goal of the study is to optimize traffic signals to increase traffic flow for cars, buses and the streetcar, as well as providing enhanced safety for pedestrians walking through the urban core.

6. Pedestrians fighting for their safety

Following multiple high-profile pedestrian fatalities in 2016 and 2017, City Council in June 2017 approved a new program that will put $500,000 toward pedestrian safety projects.

It all started in January 2016, when a Metro bus struck 73-year-old Stephen Frank and 41-year-old Emily Frank at the intersection of Erie Avenue and Edwards Road in Hyde Park. Stephen Frank was pinned under the bus and died from his injuries.

This -- followed shortly after by the on-road death of well-known local cyclist Michael Prater -- prompted Council member P.G. Sittenfeld to ask the city administration to conduct a study identifying the city's most hazardous spots for pedestrians and bicyclists.

Later that year in Northside, Sarah Cole -- who owned the neighborhood burger joint, Tickle Pickle -- was struck and killed outside her business on Hamilton Avenue. That prompted the community to rally and insist the city enact a plan to make city streets safer for pedestrians.

In November, transportation officials presented their plan for the $500,000 aimed a safety measures, including mid-road pedestrian paddle signs and enhanced lighting around targeted sidewalks. So far, the city has identified spots for the new signage in Northside, Hyde Park, East Price Hill and Walnut Hills.

7. Moving ahead on bike trails

Cincinnati covered a lot of ground with its bike trail projects in 2017, with more planned for next year.

The city broke ground in November on the long-anticipated Wasson Way Trail project, which will connect 11 Cincinnati neighborhoods via more than seven miles of mixed-use, off-road trail.

The initial phase -- expected to wrap up in June 2018 -- will mainly run through Hyde Park, connecting Withrow High School, Rookwood Commons and Hyde Park Square, among other sites.

The Ohio River Trail saw a win in 2017, too. Part of a multi-state trail system, it runs through Cincinnati along the riverfront through East End and California toward Coney Island and Anderson Township. While Cincinnati's stretch of the trail is mostly complete, there still exists a two-mile gap where the trail abruptly ends at Salem Road before picking back up at Sutton Avenue.

While at first it appeared the city would not have the funds to match a $4 million grant to pay for the trail connection, Anderson Township, Hamilton County and Interact for Health stepped up and offered money to help.

A big portion of these efforts was coordinated by another new name to arrive in 2017 -- CROWN, or the Cincinnati Riding or Walking Network. Formerly dubbed Cincinnati Connects, the group of bike advocates has proposed a plan that would connect more than 100 miles of bike trails throughout the region.

8. Building bridges... and not

It was welcome news when city and county leaders announced late this year that they've finally found the money to put toward a new Western Hills Viaduct.

The major artery connecting to the city's West Side first saw traffic more than 80 years ago, but was not built to handle the roughly 55,000 vehicles it now carries daily. While it's "structurally sound," it is "functionally obsolete," according to federal guidelines.

But leaders say time is of the essence, especially after this year saw another incident involving concrete chunks falling onto a vehicle traveling across the bridge's lower deck in July.

COLUMN: A 'sound' bridge is not necessarily a 'safe' bridge

The city and the county each pledged $33 million, and will lobby the state and federal governments to make up the rest of the $330 million new bridge.

Meanwhile, leaders still don't know how to pay for a new bridge to ease traffic woes on the Brent Spence Bridge.

The state of Kentucky owns the bridge, but Ohio leaders have expressed willingness to help pay for a new bridge. The Kentucky Transportation Cabinet released a comprehensive study in December recommending that a sister bridge sitting next to the Brent Spence is the answer for easing traffic congestion and hazardous conditions along the corridor of Interstates 71 and 75.

The study also examined multiple bypass options. It concluded that, while the bypass options are worth considering in addition to a sister bridge, the new bridge next to the Brent Spence is still necessary.

The new year promises to finally give local soccer fans an answer as to whether Major League Soccer will welcome FC Cincinnati into its lineup.

In order for that to be possible, MLS rules say that new expansion teams must play in a stadium dedicated solely to the team. That prompted team leadership to reach out to city and county officials asking for help in building a new stadium.

Both Mayor John Cranley and Hamilton County Board of Commissioners President Todd Portune were clear in saying that no public money would go toward a new stadium. But they did offer nearly $50 million combined to build up the infrastructure around a new stadium -- currently planned for construction near Oakley Station.

Leaders have also discussed other locations in West End and Newport, Ky.

The proposed plan would include widening roads, enhancing utilities and building a 1,000-space parking garage.

The team has pledged to spend $200 million to build the stadium itself.

MLS announced in December that Nashville will get a team. The league is expected to announce the second expansion team for this round after the new year.

READ MORE: What would a new stadium mean for Oakley traffic?