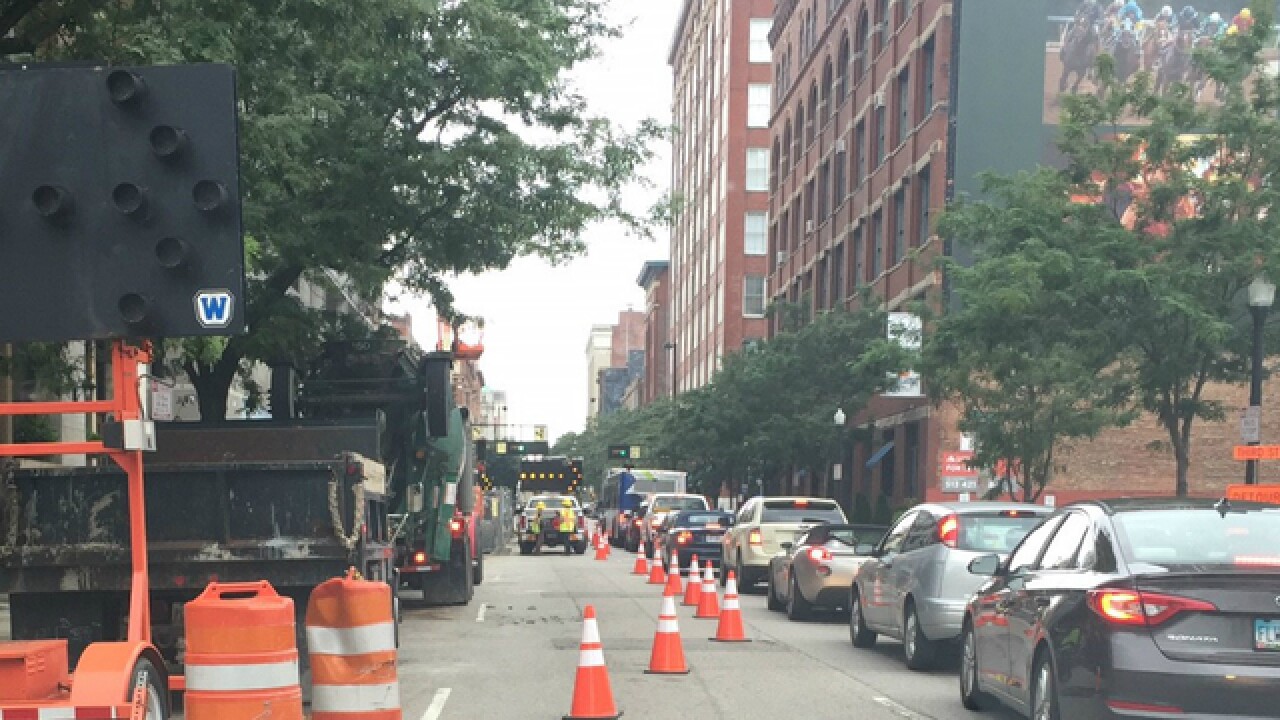 <p>This photo, taken July 27, 2016, shows traffic backing up along a detour through downtown Cincinnati, as construction work shut down a nearby access point from I-71 at the Lytle Tunnel. (Matt Booher for WCPO)</p>

His home in Covington's Mainstrasse Village sits two blocks from a bus stop that takes him Downtown. His workplace, Findlay Market, itself is a streetcar stop, effectively giving him door-to-door transit service if he transfers from the Southbank Shuttle to the streetcar Downtown.

It's a commute he calls "very convenient," given how closely he's dropped near both of his destinations. But en route? He said he'd probably pick a different, more explicit word to describe that.

Myers said his commute, when it falls within rush-hour traffic, can take an hour or longer.

Downtown traffic is a persistent issue that was taken up by local leaders this week, and Myers' experience is, by no means, rare. Both workweek rush hour and weekend events can draw big crowds and create frustrating bottlenecks at various choke-points for drivers and transit users alike throughout the Downtown traffic grid.

It's also meant some delays in streetcar arrival times at its 18 stops along the 3.6-mile route, and sometimes long waits on certain Metro buses that move through Downtown.

A proposed solution -- or at least partial solution -- might seem counterintuitive: design the system to keep public transit in motion.

'We are way behind'

Those are the words of transportation committee chair Amy Murray, who -- along with six other members of Cincinnati City Council -- approved a motion Wednesday directing the city's transportation engineers to look into various improvements to the Downtown traffic signal system.

It's been roughly 20 years since such a study has been done, said Cincinnati Department of Transportation and Engineering Director Michael Moore. It will also have a $300,000 price tag.

The typical timeframe is closer to five to 10 years, Murray said.

The study will investigate timing and coordination of traffic, pedestrian and streetcar signals throughout Downtown and Over-the-Rhine, with the intention of making rush-hour commutes like Myers' less frustrating.

"We know we have some issues with that corridor on Walnut Street, south of the library," she said during a meeting with transportation department officials.

Myers also pointed to the streetcar's turn from Central Parkway onto Walnut Street.

"That takes forever," he said. "The streetcar is very useful but at the same time, it's not any faster than the bus."

He also said he was struck by how crowded the streetcars are during the evening rush.

"It's hard to find a seat sometimes," he said

That is partially by design. The cars can hold as many as 150 people, but only come equipped with around 50 seats, to maintain an open floor plan to accommodate wheelchairs and other wheeled mobility devices.

Engineers attribute some of the congestion to the urban core's grid being designed to favor east-west travel -- between Interstates 71 and 75 -- over north-south travel, which is the primary direction taken by the streetcar and numerous Metro routes.

The study will look at adjusting that timing ratio, a complex task, Moore said Tuesday.

"Downtown is a grid. If you make a change in one spot, it will impact the whole thing," he told the committee.

The initial version of the motion, introduced by Councilman Chris Seelbach and discussed Tuesday by council's transportation committee, called for that study to look for signal patterns that would prioritize movement of public transit, namely the streetcar and certain Cincinnati Metro bus routes.

That version, which was signed by council Democrats Seelbach, Simpson, P.G. Sittenfeld, Wendell Young and Vice Mayor David Mann, references multiple traffic studies that "have shown that the prioritization and clearance of large transit vehicles can improve traffic flow overall" and suggests using some of the city's surplus streetcar revenue to cover the study's cost -- pending approval from the Federal Transit Administration.

Prioritizing transit flow would result, supporters on council believe, in not just increased flow for public transit vehicles, but for all the vehicles on the road.

The theory is, by adjusting traffic signal timing to line up more with vehicles moving at speeds typical of buses and streetcars, it will maximize in-motion time for these larger vehicles, which would then, in turn, lead to less congestion overall.

But this idea did not avoid scrutiny, even from the committee's chair, who ultimately revised the motion's language -- with Seelbach's approval -- to be more encompassing and less directly aimed at public transit. Murray asked for "recommendations that optimize and maximize the efficient movement of all users of the public right-of-way" (emphasis included in the motion).

Mayor John Cranley didn't mince words during Wednesday's City Council meeting, questioning why the money to pay for this should come from the streetcar surplus.

"I don't know why we're rushing to spend money that can be used for the capital maintenance needs of the streetcar to maintain and operate the streetcar," Cranley said. "This is wasteful spending under any circumstance." He suggested the traffic study be paid for, instead, out of the general fund.

He also balked at the notion of prioritizing public transit.

"I don't believe that rush-hour traffic should have to wait for the streetcar," he said, pointing to the 90 percent of city commuters who travel by car.

Simpson, who announced last month that she would run for mayor in 2017, saw the motion's original intent differently, responding to Cranley's remarks saying, "This isn't about prioritization. It's about getting these signals in time to help everyone get around faster."