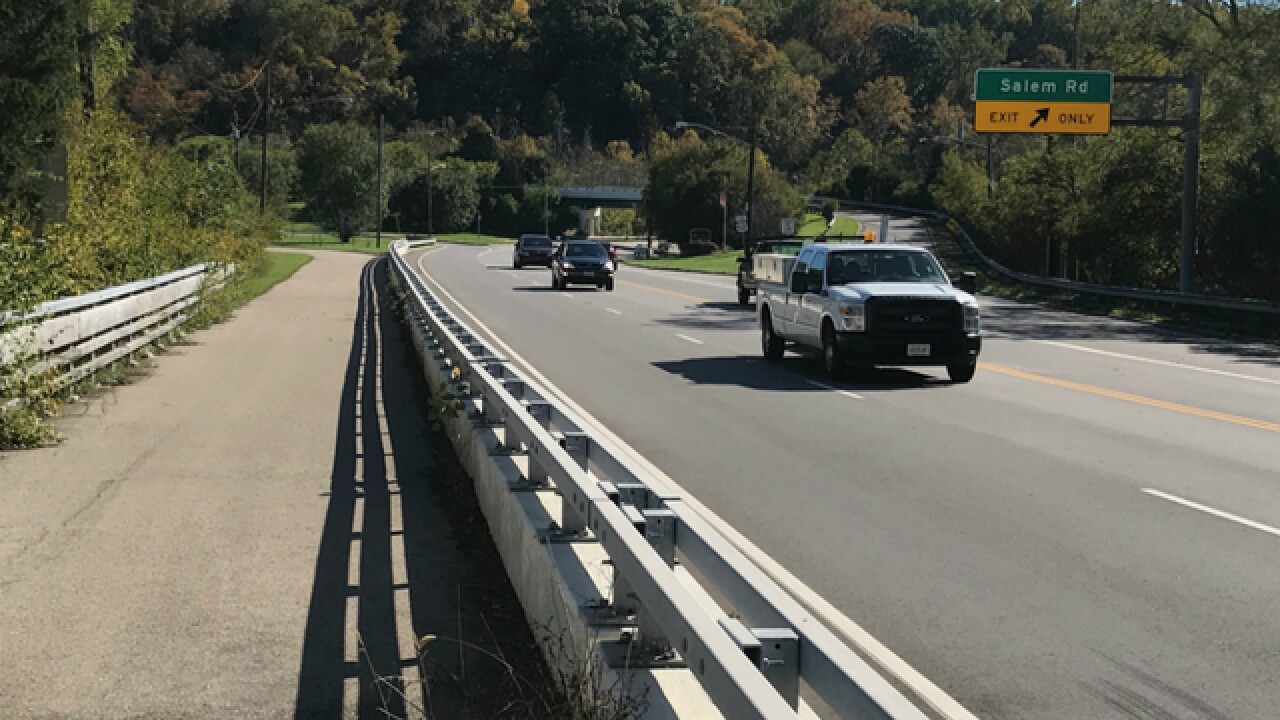 Copyright 2017 Scripps Media, Inc. All rights reserved. This material may not be published, broadcast, rewritten, or redistributed.
Pat LaFleur | WCPO
<p>The Ohio River Trail running along Kellogg Avenue terminates at Salem Road before picking back up 2.2 miles down the road at Sutton Avenue. (Pat LaFleur/WCPO)</p>

CINCINNATI -- Hope for connecting Hamilton and Clermont counties via the Ohio River Trail glimmered Tuesday when the city's transportation committee weighed committing roughly $250,000 to the project.

Transportation director Michael Moore presented the committee with the update. He explained why his department was facing having to turn down more than $3 million in federal grant money -- because there was not enough money available locally to provide the roughly $923,000 required match.

"The department has about $170,000 to contribute to the match, but we knew that just wouldn't be enough, so we'd have to return the grant," Moore said.

"We can't do everything," Moore said. "We have a lot of needs and not many resources."

When the news broke that the trail connection would likely go unbuilt, other bodies stepped up and pledged some help.

The connection would run alongside Kellogg Avenue between Salem Road and Sutton Avenue, which sits near the border of Anderson Township.

That prompted Anderson Township leaders to propose offering up to $100,000 toward the project. The Hamilton County Transportation Improvement District also pledged $300,000. Finally, the project has the approval of a $100,000 grant from Interact for Health, the regional non-profit dedicated to health improvement projects.

That still leaves the local funding match about $250,000 short.

"We are very committed to this project," Anderson Township's assistant city administrator of operations, Steve Sievers told the committee. "This is a once-in-a-generation opportunity."

The Anderson Township Board of Trustees still has to officially approve the allocation of funds, but committee chair Amy Murray said she has spoken with members of the board and feels confident in their committment.

For Tom Caruso, the planner designing the stretch of trail, the project is all about making the Tri-State's counties more connected.

Frank Henson, chairman of Tri-State Trails -- a non-profit devoted to promoting mixed-use trails throughout the region -- echoed Caruso, calling the connector trail "critical" to connecting Hamilton and Clermont counties via an alternative mode of transportation.

For outgoing council member Yvette Simpson, she thinks the time to strike is now.

"This would allow us to get one project done," she said. "We're so close."

Committee member Kevin Flynn suggested making the city's commitment of an additional $250,000 to fill the financing gap contingent on the other organizations locking in their contributions.

Murray asked Moore to prepare information on where the city could find the extra money and present at the next transportation committee meeting, scheduled for Tuesday, Dec. 19.

Pat LaFleur reports on transportation and mobility for WCPO, and prefers travel on two feet or two wheels. Connect with him on Twitter (@pat_laFleur) and on Facebook.