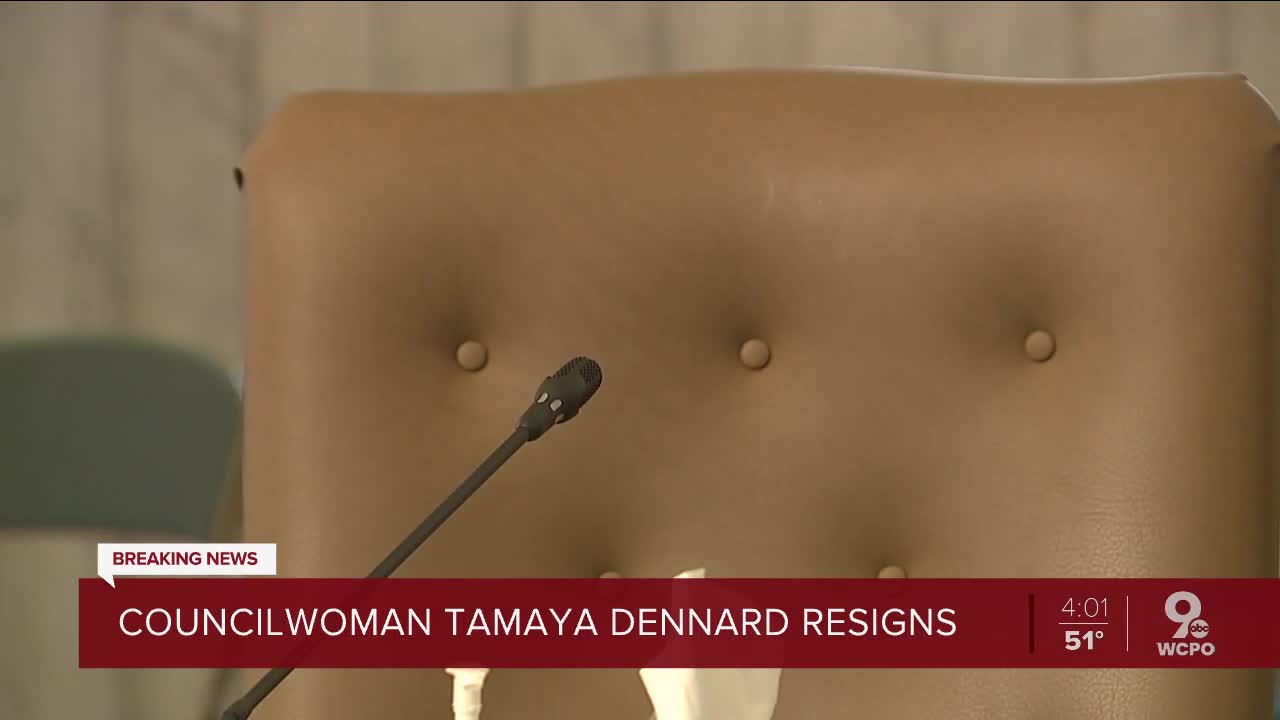 Tamaya Dennard announced her resignation from Cincinnati City Council, bowing to an ultimatum and the threat of more criminal charges from Hamilton County Prosecutor Joe Deters. 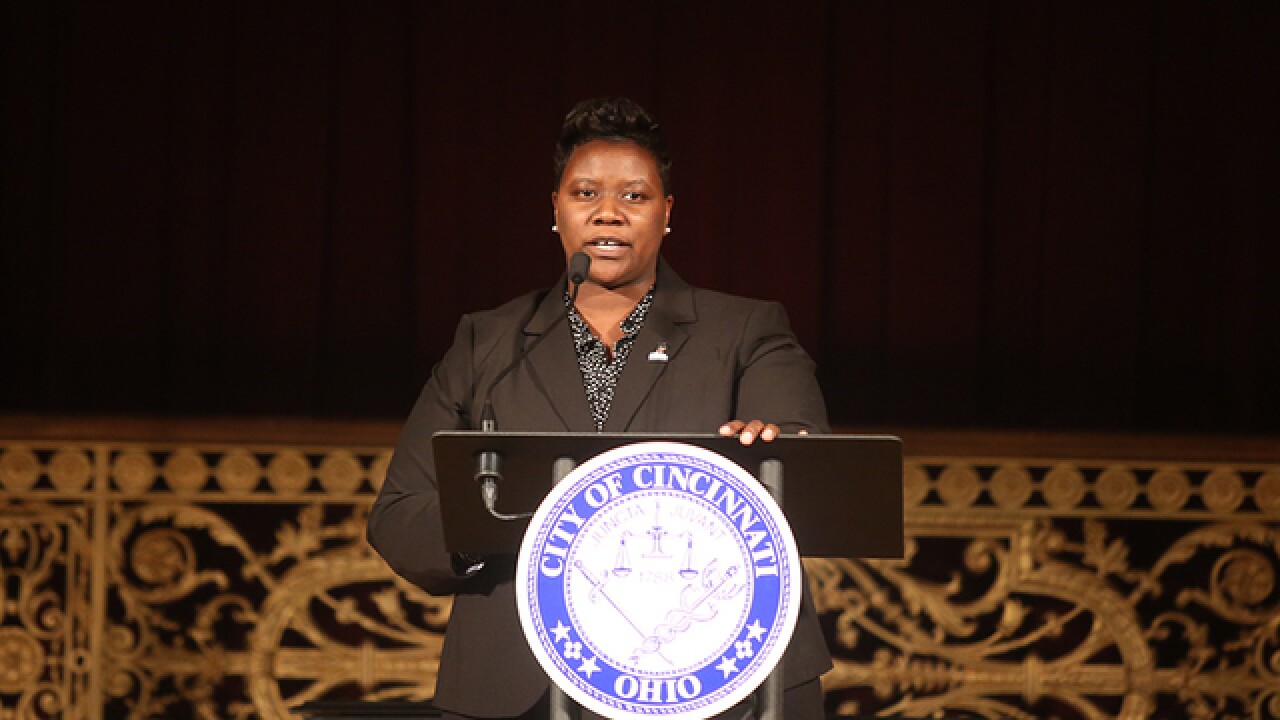 CINCINNATI — Tamaya Dennard bowed to an ultimatum and the threat of more criminal charges from Hamilton County Prosecutor Joe Deters and announced her resignation from Cincinnati City Council on Monday.

“The last thing I want is to be a distraction from the work that needs to be done for this city,” Dennard wrote in a statement. “My main focus has been the people I serve. I need all of my time and energy to address these charges against me. It is for this reason I have decided to step aside.”

Deters had threatened to indict Dennard for bribery in addition to the three federal corruption charges already filed against her in United States District Court. If Deters had done so, the chief justice of the Ohio Supreme Court could have begun the process of forcing her suspension.

"Had Ms. Dennard continued on city council with this matter pending in federal court, the taxpayers and citizens of our community would have reason to doubt any official action she took," Deters wrote in a statement shortly after her announcement. "Her resignation is a good step for the city and for her personally.”

Councilman Greg Landsman, who told WCPO 9 he gave Dennard $1,000 last year when she asked him for money to cover hardship expenses, said he will ask for an internal review Tuesday. "Of votes, inactions relative to the whole thing, and anyone else," Landsman said.

"I think people need to know that we're taking a very intentional approach to looking at everything that's happened and ensuring if there are other irregularities that they are resolved," Landsman said.

Councilman P.G. Sittenfeld, who had been Dennard’s political mentor, is tasked with choosing her successor. Under City Council rules, Dennard designated him to fill her seat if it became vacant.

“This has been a tough stretch for our city, and this is the right thing to allow our city to move forward," Sittenfeld said in a statement Monday afternoon. "I will soon be sharing the process for filling the open seat, so that we have 9 Council Members doing the city’s business.”

Councilmembers said Dennard's successor has to be someone with integrity.

"This has not been the best of times for city council, right?" said David Mann said. "So we need someone of impeccable qualifications. Somebody who is a female, somebody who is African American, somebody who can step into that seat immediately and have a positive impact."

Wendell Young had the same idea.

"I do believe it should be a female. I prefer an African American female," Young said. "It should be someone who has credibility in the black community, who is electable, a person with some life experience. I think we need to be very thoughtful but move quickly."

Young said he believes there are a few people that match that description.

Sittenfeld has 30 days to act or the power to fill Dennard's seat would go to the full council.

City Council is losing both women on the nine-seat panel. Republican Amy Murray is resigning Wednesday to take a job in the Trump administration.

According to federal prosecutors, Dennard attempted to solicit more than $16,000 from a local law office involved in the development of The Banks, promising to vote in the firm’s interest if they paid her.

Downtown development firm Frost Brown Todd would later confirm it was the firm Dennard had approached — and Tom Gabelman, one of its most prominent attorneys, had been the person she directly propositioned.

Gabelman took the information to the FBI instead, and agents paid Dennard through Gabelman, according to the FBI. Agents arrested Dennard Feb. 24 and charged her with honest services wire fraud, bribery and attempted extortion. The FBI said it has recordings of Dennard's conversations as well as text messages and email as evidence.

When her arrest became public, Mayor John Cranley called for Dennard to refute the accusations or resign. Mann said she was entitled to due process but should resign if the charges were accurate.

Before Monday, Dennard's only public comment on the matter came in a Facebook post last week. Her attorneys had said she would decide on resigning or not by the end of this week.

On Sunday, Deters told WCPO 9 he decided to take matters into his own hands after he spoke to the Ohio Attorney General's office and the U.S. Attorney's office this weekend. A federal trial could take months or years, and Deters said it was unclear how long it would take to remove Dennard from office through a citizens suit filed in Probate Court last week. The city solicitor could have chosen to not prosecute the case at all.

“On behalf of my clients, we are pleased that, through the filing of the complaint in probate court, we were able to be the leaders in directly addressing the status of Tamaya Dennard as a member of Cincinnati City Council," said attorney Curt Hartman, who filed the suit on behalf of Mark Miller, a government watchdog and treasurer of the conservative Coalition Opposed to Additional Spending and Taxes (COAST).

When asked about due process in the case, Deters told WCPO 9 it "doesn't matter" that Dennard hasn't been convicted of a crime. "She would be suspended with pay," Deters said. "If she’s convicted, she has to pay it back."

If Dennard had not resigned, Deters said he would have asked Ohio Supreme Court Chief Justice Maureen O'Connor to suspend her. The chief justice would then appoint three retired judges to examine the case for probable cause, Deters said. The whole process, which was used to remove Pike County Sheriff Charles Reader from office last year, could have taken less than 30 days.

Early Monday, Deters said "it's an embarrassment to the city" for Dennard to remain in office and suggested she would be doing herself a favor to step down.

"It would be very smart of her to at least show some remorse and get out of office. The U.S. Attorney has a strong case against her," Deters said on Bill Cunningham's radio show on WLW.

"This is going to sound strange, but it looks bad for her."

Dan Monk of WCPO 9 was first to identify Gabelman as the attorney Dennard approached for money. According to the FBI complaint, which didn't name Gabelman, Dennard asked for money to pay her rent, place a down payment on a car and pay for attorneys fees.

The votes, court documents explain, were specifically related to development projects at The Banks, including the upcoming music venue and a proposed land swap with Hilltop Companies.

WCPO 9 wants to hear from you on Dennard's resignation. Call the Feedback Friday hotline to voice your opinion at 513-852-4998.