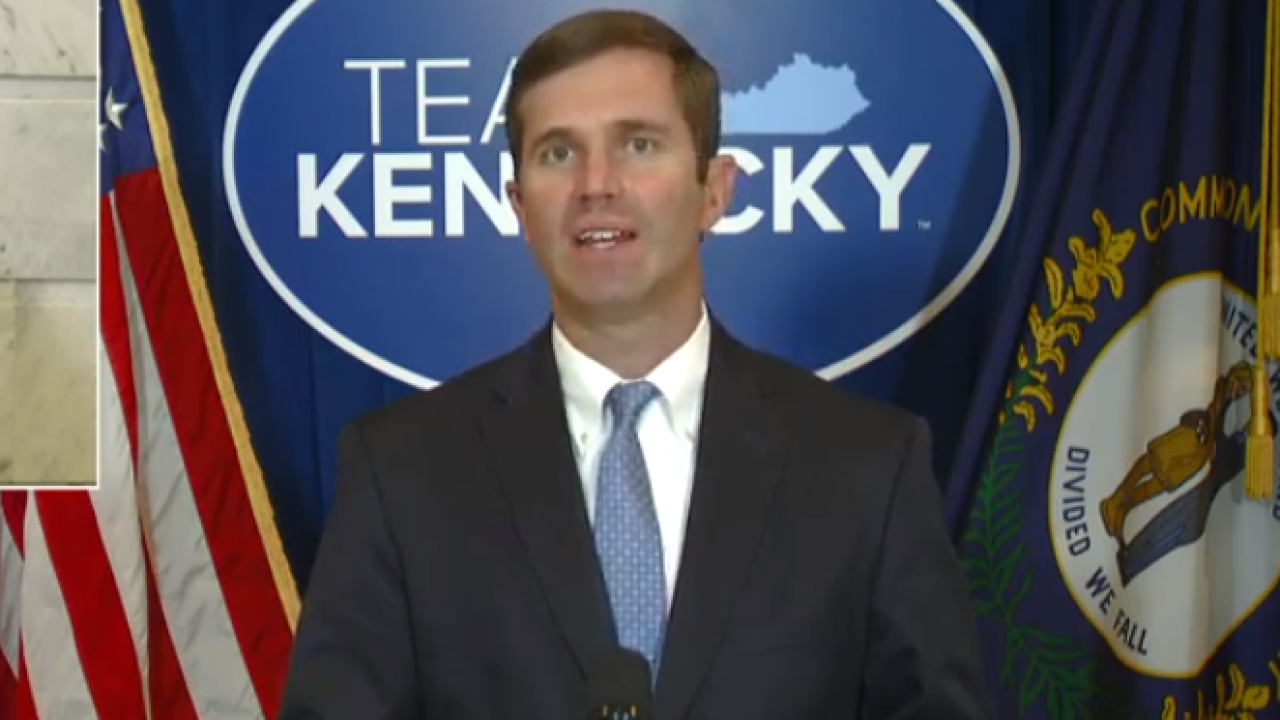 Copyright 2020 Scripps Media, Inc. All rights reserved. This material may not be published, broadcast, rewritten, or redistributed.
Gov. Andy Beshear at a COVID-19 update July 17, 2020.

After a marathon 12-hour hearing Thursday, Attorney General Daniel Cameron asked the Boone County Circuit Court for a temporary injunction on Beshear’s executive actions during the pandemic, including his latest order on masks in public and pandemic assistance.

The court granted the injunction late Thursday to allow daycare ratios to increase from 10 kids to 15 for every teacher, and for restaurants to allow social distancing at three feet back-to-back.

However, that injunction has been stayed Friday by an order from the Kentucky Supreme Court, which means all of the executive orders, including Beshear's mask mandate, will stay in effect.

"Given the need for a clear and consistent statewide public health policy and recognizing that the Kentucky legislature has expressly given the Governor broad executive powers in a public health emergency, the Court orders a stay of all orders of injunctive relief until such time as the various orders are properly before the Court with a full record of any evidence and pleadings considered by the lower courts," the order reads.

Beshear said without the judgment Friday, requirements that keep Kentuckians safe and assistance for health systems and those out of work would not have been enforced.

"It threatened all of the extra support we have given to our first responders, and it would have devastated our school systems," Beshear said Friday. "But thankfully today the Kentucky Supreme Court put in an order a little less than two hours ago that is going to prevent any orders from these lower courts that would restrain these things we've done to keep people safe."

Read the Kentucky Supreme Court's Friday order in the viewer below:

It's the third-highest daily new case count since the pandemic started in March. The second-highest case count came Tuesday (576) and the highest daily case count was reported May 5, when 625 people tested positive including 390 inmates at Green River Correctional Complex.

Kentucky reported 522,267 tests administered since the pandemic began in March. More than 6,700 people have recovered from the virus.

NKY Health reports that 2,102 people in Boone, Campbell, Kenton and Grant counties have tested positive for coronavirus since March, and 79 people have died of the virus as of Friday.

Additionally, there have been 21 daycare staff members and 23 children who have tested positive for COVID-19 connected to 23 facilities across the state.

In 224 of Kentucky's long-term care facilities, 2,205 residents and 1,150 staff have tested positive for the virus, and 412 residents and three staff members have reportedly died of the virus as of Thursday.

Besides getting tested, Beshear said wearing a mask is the best way to make sure that events like fall sports and school reopenings can happen in Kentucky, even as many states are having to "significantly roll back their reopenings" amid higher case numbers.

"I don't want that to be us, and I hope you don't either," Beshear said.

Ernst & Young, a firm contracted by the state late last month to assist the state unemployment office, have resolved 10,635 unemployment assistance claims in just over two weeks. Beshear expects that with Ernst & Young's added 300 employees helping, Kentucky will soon be able to process 4,000 claims per day going forward. He said about 5,000 claims remain from March.

"We had a computer system that is 20 years old, we had a loss of 95 employees two year ago and a loss of lots of regional offices and a budget cut in and then we had the most claims ever filed - by a lot - in a very short period of time. But our job is to fix it," Beshear said.

Beshear said some Kentuckians may expect a call from the state unemployment line about their claim (502) 333-9130. This number is automated and cannot be called back, so Beshear asked people who receive a call from this number to pick up to receive important information.

Watch a replay of Friday's briefing in the player below: