Read the full executive order below 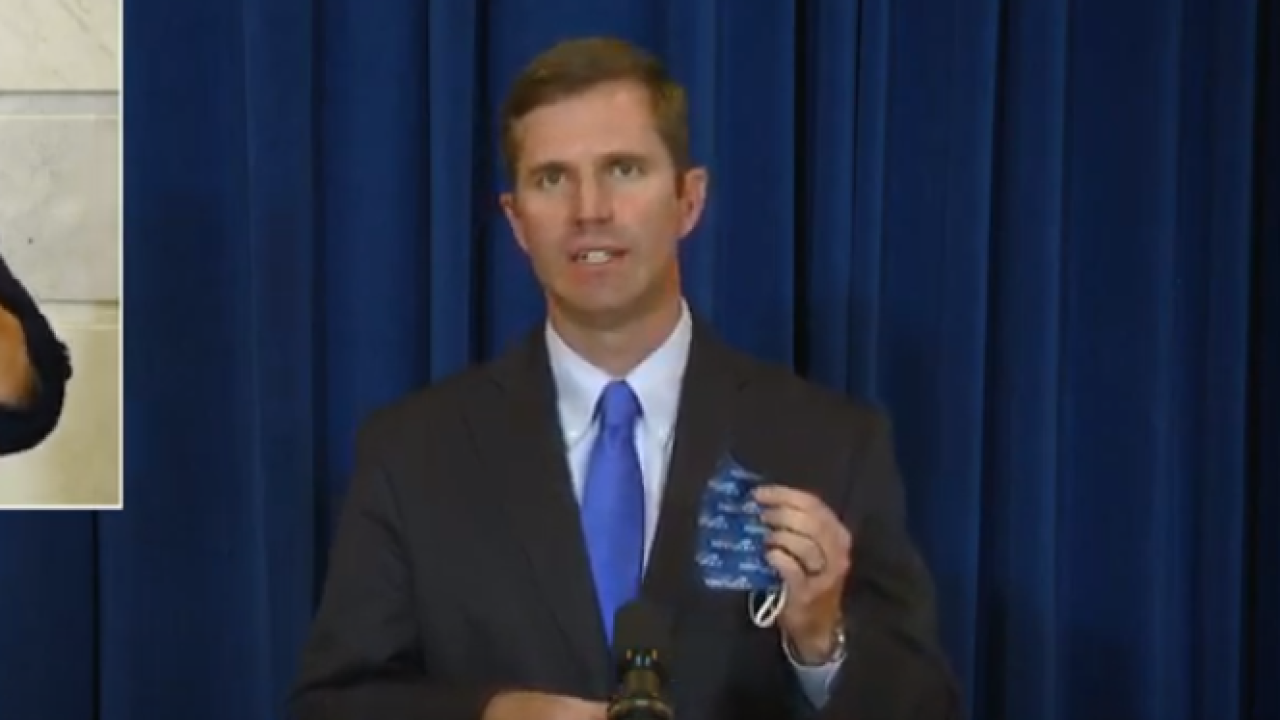 Beshear announced the mandate at a press briefing Thursday in response to the state's "rising numbers" of COVID-19 cases over the last four to six days.

“I hoped that we wouldn’t have to get to a point were we mandated things," Beshear said Thursday. "I hoped we would be willing to do the right thing, but I think the amount of time we’ve dealt with this … it’s time to get serious.”

Masks will be required on public transit and in most indoor spaces, including grocery stores, retail stores, forward-facing businesses and anywhere that people cannot distance at least six feet apart, even outdoors. People must wear masks while waiting in line or while inside restaurants and bars, taking them off only when seated to eat or drink.

There are several exceptions to the order, including for:

Local health departments will enforce the order. For individuals, enforcement will start with a warning that may result in a fine after repeated violations, though Beshear did not specify what type of fine.

Businesses must also ask people inside their establishments to put on a mask or refuse service. Beshear said businesses may also face fines if they do not enforce the order. The mandate comes after the National Retail Federation and the Kentucky Retail Association called for Beshear to mandate masks so that those businesses can stay open at 50% capacity.

"It's going to as simple as, if someone won't wear a mask in your place of business, then they cannot be served. It's that simple," he said.

According to Beshear, the order will run for 30 days, and state leaders may renew it based on where case numbers are at the end of that time.

Read the full executive order in the viewer below:

Before Beshear brought up concerns that would prompt the new "mandatory requirements" on Thursday, he and Public Health Commissioner Dr. Steven Stack had been reporting a plateau in case numbers at daily, and now weekly, press briefings.

On Thursday, Beshear said daily case counts previously ranged from 120 to 330 new cases a day, but those numbers have skewed to the higher end of that range in the last few days. Beshear compared that to states like Arizona, which before spiking to several hundred or 1,000 cases per day saw similar numbers to Kentucky after reopening places of business.

Beshear reported 333 new cases of COVID-19 and four virus-related deaths on Thursday. Kentucky reports 612 total coronavirus-related deaths out of 18,245 virus cases since the beginning of the pandemic in March. Nearly 5,000 people have recovered from the virus, and the state has tested 461,756 people as of Thursday.

NKY Health reports that 1,828 people in Boone, Campbell, Kenton and Grant counties have tested positive for coronavirus since March and 78 people have died of the virus as of Thursday.

Beshear, who said one of his main concerns is that coronavirus could overwhelm the state's medical centers, reported that out of the state's hospital beds, 11,243 are currently occupied and 7,309 are available (60% occupancy).

Attorney General Daniel Cameron announced on Thursday that a Scott Circuit Judge ordered Gov. Andy Beshear to cease issuing or enforcing executive orders related to COVID-19 unless the orders meet specific criteria for an emergency as outlined by state law, according to WCPO media partner LEX18.

The judge stated in order to issue and enforce COVID-19 executive orders, Beshear must specify the state of emergency that requires the order, the location of the emergency, and the name of the local emergency management agency that has determined that the emergency is beyond its capabilities.

“The Governor cannot issue broad, arbitrary executive orders apart from the requirements of state law, and the Judge agreed by today issuing a statewide temporary restraining order,” Cameron said. “This is a clear win for the rule of law and will help Kentucky families and businesses across the Commonwealth who have suffered and continue to suffer financial losses and economic hardship because of the Governor’s executive orders.”

For those still waiting on claims or who need to file for unemployment amid the coronavirus pandemic, Kentucky will set up three in-person help centers around the state next week. One of these sites at the Northern Kentucky Convention Center in Covington will offer services by appointment only from July 13 through July 17. Sign up for an appointment at www.kcc.ky.gov.

In addition, over $36.2 million in CARES Act funding will be rerouted to 61 local health departments as they grapple with a rise in new COVID-19 case numbers. The funding will help with projected payroll expenses, contractual service costs, travel, and medical supplies that these health departments are expected to incur in during their pandemic response.