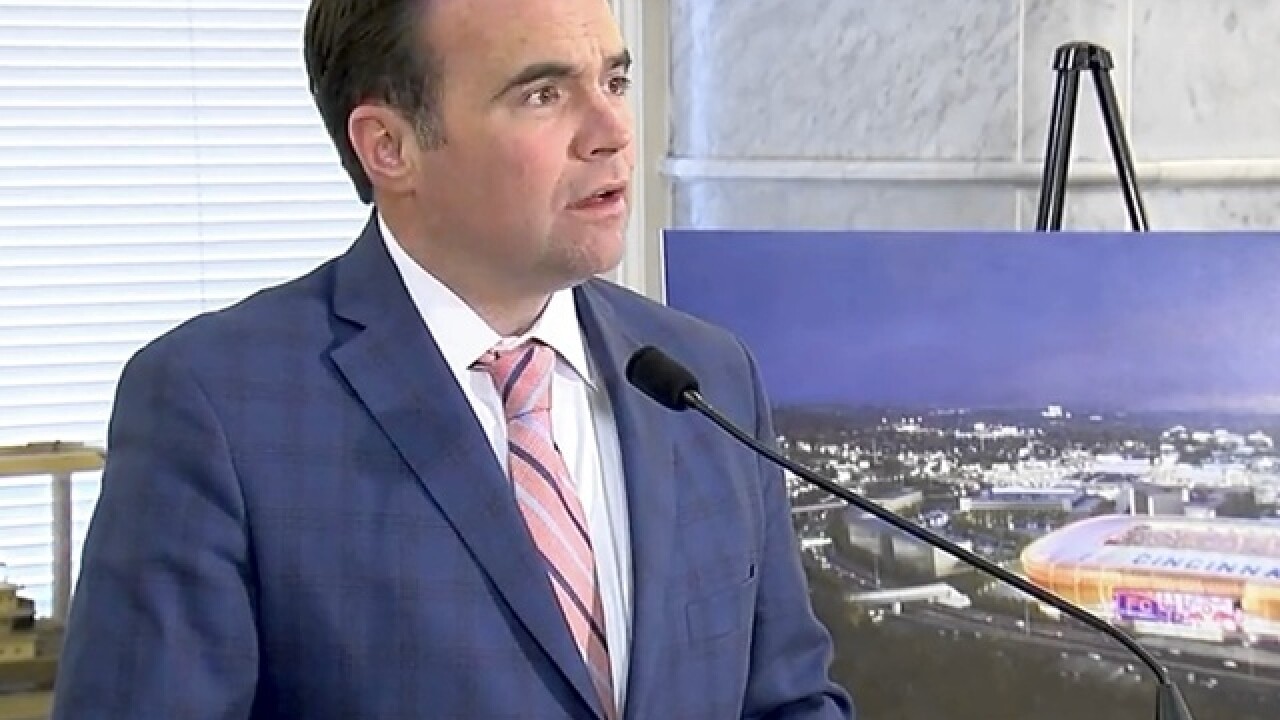 Editor's note: An earlier version of this story incorrectly Cranley asked for $75 million. This story has been updated.

CINCINNATI -- Mayor John Cranley proposed on Friday afternoon that the city give millions of dollars to create the infrastructure needed to support an FC Cincinnati stadium in Oakley.

Cranley announced plans Friday, which will go before city council Nov. 29, for infrastructure improvements that would not only support a stadium, but bring "thousands of jobs" to the city, the mayor said. If approved, the plans would only go into place if FC Cincinnati is given a Major League Soccer franchise.

Here's where the money comes from in Cranley's proposal:

In total, the mayor's $62 million financing plan is expected to cover $37 million worth of infrastructure for the stadium. The deal is contingent on the county paying for a $15 million parking garage.

A tax increment financing district, or TIF, works like this: Businesses improve properties. That means property values go up. The taxes on the difference between the original property value and the new value go into a fund to be used for future improvements. TIF programs are also used as incentives in some cases where the developer doesn't pay the taxes on the increased property value.

"This city routinely provides infrastructure support to private investments, and this deal should be viewed in the same light," Cranley said.

According to the plan, the city would pay for new sewers, utilities and roads, including an expansion of Vandercar Way.

Under the plan, the Cincinnati Port Authority -- a government agency -- would own the stadium. That means the city, school system or county would not collect any property taxes on the entire property, including the stadium.

FC Cincinnati is part of the city's renaissance, Cranley said.

"By limiting our investment into public infrastructure, the benefits go beyond FC Cincinnati and create opportunities for all," Cranley said.

FC Cincinnati President Jeff Berding announced Tuesday that the team would privately pay for the $200 million stadium. No public dollars would be used. However, he said the stadium would need $75 million in infrastructure -- primarily roads and parking. The mayor's plan and the county's parking garage covers most -- but not all -- of that ask.

Berding and Cranley had hoped the county commission would pick up a big chunk of that $75 million.

But the commissioners balked at paying that much. The commission pledged to build a $15 million parking garage for the stadium if FC Cincinnati and MLS can convince commissioners that Paul Brown Stadium won't work for the team and league's needs.

Berding said using Paul Brown Stadium for the team's stadium plan would be a "losing bid" with the MLS. The league is asking teams for a soccer-specific stadium, and there are 12 cities bidding right now for just two spots.

FC Cincinnati attempted to set up a call between the county, MLS and team officials for Friday, but key county representatives were not available. The groups are trying to reschedule for next week.

Even with the possible $15 million parking garage, that still leaves the project well short of the infrastructure needs.

Cranley's plan would help bridge that gap, but first he will have to convince City Council that it is worth spending the money on FC Cincinnati's needed infrastructure improvements.

Cranley has to get five votes from city council for the proposal to pass.

Councilman Chris Seelbach attacked the idea of using taxpayer dollars to make the stadium a reality on Twitter. He said the stadium would just make wealthy white men more wealthy.

Vice Mayor David Mann told WCPO on Thursday: "We're in no position to make up the additional money we had hoped for from the county."

Major League Soccer will announce on Dec. 14 two new expansion teams. With the deadline nearing, Berding told WCPO the club has turned its attention to Newport while hoping Cranley can convince city and county leaders to pay for infrastructure for its preferred stadium site at Oakley Station.

"If the county is not willing to participate and it's beyond the reach of the city, I feel confident we have a pathway over in Newport and we'll go there," Berding said Thursday in a one-on-one interview with WCPO anchor Tanya O'Rourke.

Berding argued if FC Cincinnati doesn't build in Oakley, other developers will build there instead -- and they'll ask for government help with infrastructure, too.

In a statement Friday evening, Berding thanked Cranley for his "strong leadership" in creating a plan for infrastructure.

"We thank Cincinnati Mayor John Cranley for his strong leadership in stepping up with a major commitment for funding infrastructure necessary to support our $350 million in private investment to bring Major League Soccer to Cincinnati," Berding said in a statement. "We hope that Hamilton County will get us over the finish line.

"Our team and our owners are ready to finance a new soccer specific stadium. We are offering a model that the public can embrace where government is capitalizing on a significant private investment to better our region. The support for public infrastructure is not unique and no different than what would be necessary for any other development in Oakley.

"We look forward to continuing discussions with City Council Members as a part of the public process, and hope that we can count on their support. We have had productive conversations with County leaders over the last two days, and will continue such work over the weekend and into next week as we near our MLS Expansion deadline. It is Cincinnati's bid to lose."