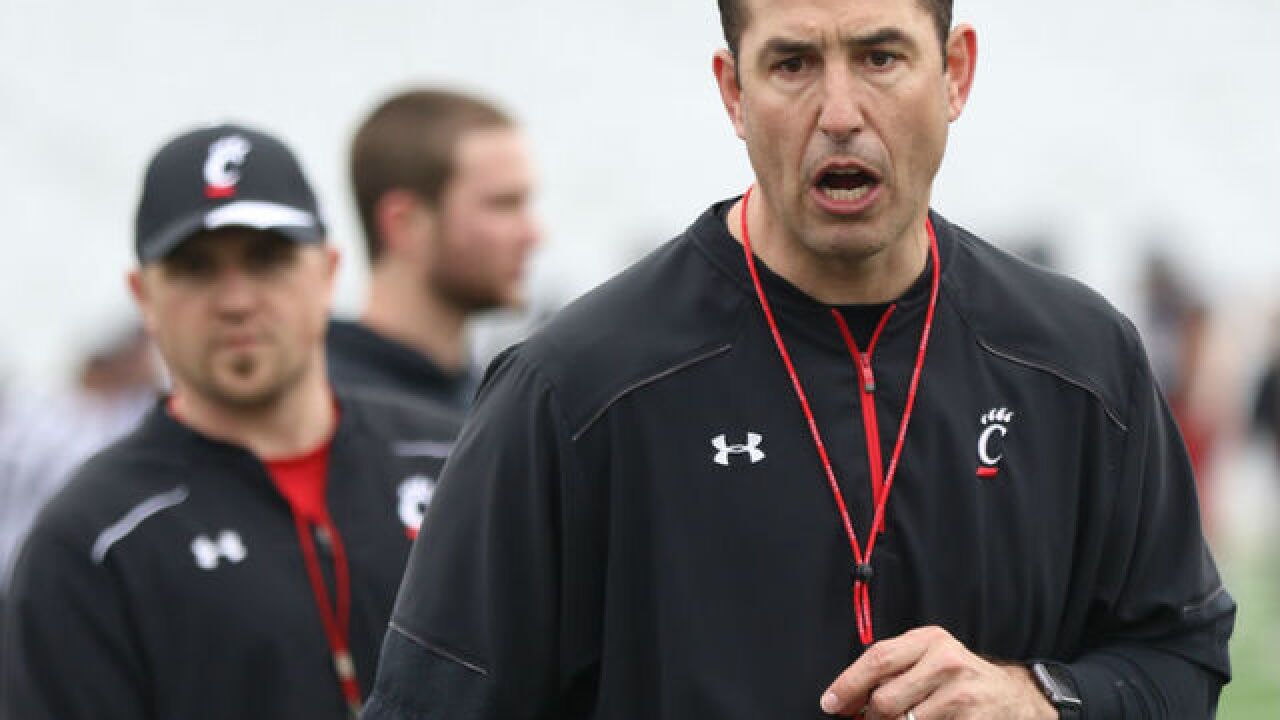 CINCINNATI -- Luke Fickell has settled in with the University of Cincinnati football team after a rough first year at the helm, and the Bearcats have reason to believe they'll see improvement in his second season.

UC, which made five straight bowl games from 2011 to 2016, hopes to turn things around after a two-year absence from the postseason and back-to-back 4-8 finishes.

Here is a look at the top 9 things to know about the Bearcats as they head into their season-opener Saturday at UCLA:

Cincinnati was picked to finish fourth in the Eastern Division in the American Athletic Conference preseason coaches’ poll, ahead of UConn and Eastern Carolina.

Central Florida, which finished the 2017 season as the only unbeaten team in the nation, was selected as the favorite to win the division as well as the conference championship; South Florida was picked to finish second in the East and Temple voted third.

UC is the only team in The American to return its leading rusher (Gerrid Doaks), passer (Hayden Moore) and receiver (Khahlil Lewis) from last season.

Doaks rushed for 513 yards and two touchdowns on 87 carries last year, Moore completed 56.4 percent of his passes for 213.5 yards per game and 20 touchdowns, and Lewis accounted for 676 yards and seven touchdowns receiving.

Moore sits fifth on the program’s all-time chart with 6,191 yards passing for his career.

Although he is the assumed starter as a returning senior, Moore is battling redshirt freshman Desmond Ridder for the job. Fickell doesn't plan to name a starter until gameday.

Ridder is a dual-threat quarterback from Louisville-St. Xavier High School in Kentucky. In two seasons as a starter, he threw for 2,270 yards and 19 touchdowns and ran for 1,583 yards and 30 touchdowns.

“Both those guys have battled very well,” Fickell said. “It's probably been the best battle we've had on our team throughout our fall camp.”

The Bearcats will go as far as the guys up front take them, and that could be a good thing with three starters returning to the defensive line and four senior starters on the offensive line.

Defensive end Kevin Mouhon would have been a fourth returning starter had he not injured himself at the end of the spring. Kimoni Fitz got 12 appearances with one start last year and looks to replace him, and he is joined by returning tackles Marquise Copeland and Cortez Broughton.

Returners Garrett Campbell and Kyle Trout are back to lead the offensive line, joined by fellow seniors Dino Boyd and Chris Ferguson as the bookends, and junior Morgan James is slated to start at right guard.

“In order to have the season we expect to have it has to start up front,” Fickell said in his weekly press conference Tuesday. “We pride ourselves on being an offensive line and defensive line driven program, and there’s no better place I would rather start than up front.”

Cincinnati’s pass rush defense ranked among the worst in college football, producing just 12 sacks all year, but fixing it has been a point of emphasis heading into this season.

Copeland accounted for a team-high 3.5 sacks last year, while Mouhon and graduated Lyndon Johnson each had 2.0 sacks, so there isn’t a lot of production returning in that regard, but freshman Malik Vann, a local product from Fairfield High School, is expected to help in that area. Vahn totaled 6.5 sacks as a senior.

Special teams might have been the most consistent aspect of the team last year, while UC’s offense and defense left plenty of room for improvement overall.

The only area in which Cincinnati ranked better than No. 63 nationally was in net punting. Smith averaged 42.0 yards per punt with a long of 66 yards last year as a true freshman.

UC returns 13 starters, including All-AAC selections in Broughton, Copeland and punter James Smith, but Cincinnati is one of the five youngest teams in college football, featuring 81 underclassmen (29 sophomores, 17 redshirt freshmen, 35 true freshmen) on its 112-person roster. Almost 70 percent of the roster is made up of players in their sophomore year or younger.

Among the young players is a highly-touted signing class which ranked atop the American and included 15 signees from Ohio and 19 from the 300-mile radius surrounding UC's campus. Vann projects to make an immediate impact as a backup at defensive end.

Expectations are always higher in a coach’s second season, especially in a rebuilding process, and that’s the case for Fickell, as well, even though his mark through recruiting likely won’t show up until Year 3.

RELATED: Broo View: When will some of that Ohio State mystique rub off on the Cincinnati Bearcats?

Fickell felt the team benefited from an extra week of camp at Higher Ground this preseason and is looking for big leaps from last year.

“Being in some tough situations, you learn a lot about people, and that's kind of what we went into last year,” Fickell said. “Going into this, there is still a lot of unknowns for us, and things we have to do, like the start of any season, but we know each other as a team and as a program a lot better. I've got a lot better feeling for how we are going to handle some adverse situations. As a staff, we all feel a lot better going into our second season.”

UC opens the season in Pasadena, California, on Saturday when they face UCLA at the Rose Bowl, and the first few games should provide a great atmosphere.

“To me, there is no greater opportunity than to start the season at the Rose Bowl, one of the greatest venues in college football,” Fickell said. “I’m excited for our program. Saturday can’t come quick enough.”

From there, the Bearcats head across town to Paul Brown Stadium where Miami University will host them Sept. 8, and then comes the home opener Sept. 15 against Alabama A&M and a matchup with Ohio University on Sept. 22 at Nippert.