Broo View: When will some of that Ohio State mystique rub off on the Cincinnati Bearcats? 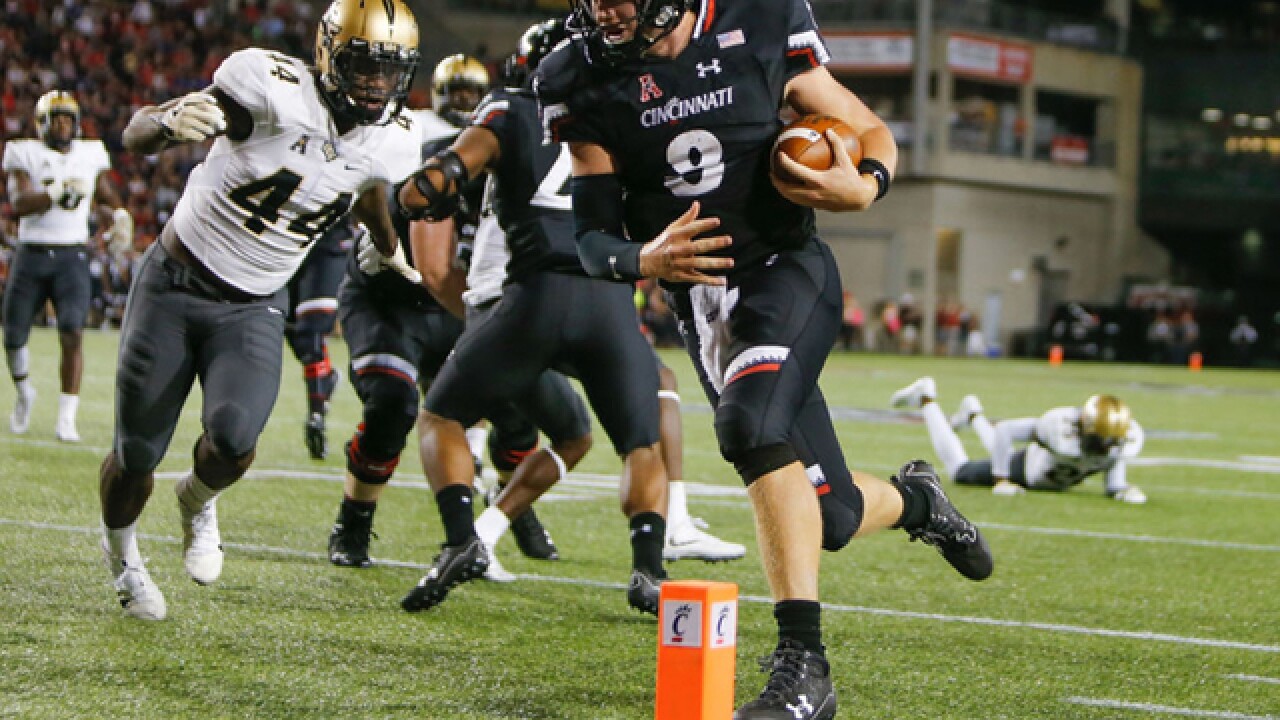 Image copyright 2017 Getty Images. All rights reserved. This material may not be published, broadcast, rewritten, or redistributed.
WCPO | file
<p>The Bearcats are about to launch Year 2 of the Luke Fickell era.</p>

CINCINNATI -- The first drop of sweat has yet to fall. And as we wait for that, we wonder: When will that Ohio State mystique rub off on the Cincinnati Bearcats?

This will be Year 2 of the Luke Fickell era. At University of Cincinnati, most coaches don't stick around for more than three years. A couple of Decembers ago, UC Athletic Director Mike Bohn had seen enough of Tommy Tuberville to know the difference between someone who knew how to win football games and someone who was taking an early retirement. He zeroed in on one replacement and got his guy -- even if he had to go to Columbus to get him.

You see, some things die hard for veteran UC fans. There's the old Bob Huggins thing. And the even older Ohio State-won't-schedule-us thing. It's hard being the younger brother. And when the older brother doesn't want to play with or against you, it's even harder.

But Fickell was different. Even if he was an Ohio State lifer, those Buckeyes were always good. Even when Fickell took over from the guy who bought his vests in bulk, he managed to hold things together for a 6-6 season. It was that Ohio State mystique. Surely that would rub off on the Bearcats. Who knows, some of my UC friends told me, maybe Fickell would like it so much around here, he would spend the rest of his life as a Bearcat.

For what he had to work with -- and that wasn't much -- Fickell did well to guide his team to a 4-8 finish. God bless Hayden Moore, he tried. But Moore was hardly spectacular, nor was the offense he was trying to lead. The Bearcats averaged just 4.4 yards on the ground, and yards-after-catch were seemingly nonexistent.

On defense, no one took the ball away. Just 11 turnovers created in 12 games won't win you much.

Tuberville didn't just watch Rome burn while he was here. He failed to call the fire department. Thanks, TT, for the advice going out the door: "Go to hell. Get a job."

Truthfully, the Bearcats could use a little of that Ohio State mystique -- and soon. The Cincinnati sports landscape is getting crowded these days. It's not just a fight for the ticket-buying public. The real fight is for stadium-suite buyers, plus stadium signage, donor dollars for large projects and, of course, sponsors. The trick for any team that plays in a city the size of Cincinnati is expanding its fan base past the core base. UC fans always will be there. There simply aren't enough of them. Like the Cincinnati Reds, like FC Cincinnati and, yes, UC fans, like Xavier.

In the halcyon days of Brian Kelly, expanding the base wasn't a problem. BK could sell a brat to a guy with a GI problem and make the guy feel like he had just gotten a bargain. His players weren't great but they played as well together as any team in UC football history. They won games, a lot of them late in the ballgame. Kelly bellowed and the casual fans showed up. Going to a UC football game became "the" thing to do. In fact, in 2009, with Kelly all but gone to Notre Dame, UC came within one second of playing for a national title. Thanks, Big 12, again.

The Bearcats could use some present-day success to erase some ancient history. And the luster hasn't worn off yet from Fickell.

"First of all, he's doing a great job recruiting," college football guru Phil Steele told me. "He brought in the third-best recruiting class of all the 'Group of 5.' But they're going to have to have improved quarterback play this year, after completing just 56 percent of their passes last year."

Hayden Moore, God bless him. Sure he threw only nine interceptions in 2017. But he also threw just 20 touchdowns. It's one thing not to make mistakes. It's another not to make things happen.

Moore is back again as the starter. And Ross Trail, whom Tuberville said every team in college football would love to have, has hit the trail, as of yet for parts unknown.

"I did not put UC on my most improved list," Steele told me. "They do play a difficult schedule. They'll probably be an underdog at UCLA, home to Ohio, which I think is loaded this year, at Temple, home to Navy. But I think this team can contend for a bowl spot this year. And I really think you'll see Coach Fickell get it rolling in the third year, like a lot of new head coaches do."

Meantime, up the road a couple of hours, things couldn't be rosier. Ohio State lost its starting quarterback, two other players in the first round of the NFL Draft and its high-energy defensive lineman. According to Steele, the Buckeyes got better.

"You look at the quarterback position, I think Dwayne Haskins is going to come in and upgrade the passing game. He won't be the runner that J.T. Barrett was. But he's still mobile enough. And then, he's got J.K. Dobbins and Mike Weber in the backfield, an outstanding corps of receivers. And an offensive line that I rate No. 7 in the country. And the defensive line, No. 2 in the country, led by Nick Bosa."

Steele has the Buckeyes picked to be one of the top four teams in the country, which of course means a spot in the College Football Playoff: "There are five legitimate contenders this year in the Big 10. I'm talking about Ohio State, Michigan, Michigan State, Penn State and, of course, Wisconsin. Of the five, I think Ohio State has the best talent."

Meanwhile, the boasting has begun in South Bend, where Brian Kelly says his team has a great chance to win 10 games again this season. That hasn't happened for Notre Dame since '92-'93. This will win you a bar bet: Who quarterbacked the Irish the last time they won at least 10 games in back-to-back seasons? Kevin McDougal.

It's the end of July. All things are possible. Probable? We'll see the end of October.

Now on to several things that have kept me awake at night.

The greatest frontman in the history of rock 'n' roll: Mick Jagger.

I could have picked a dozen songs to celebrate Jagger's 75th, but I chose this ballad. Rock, disco and ballads. Few groups have ever charted in all three genres. This is from The Rolling Stones' 1973 album, "Goats Head Soup."

The story goes that Keith Richards was in a drug rehab center while his wife was giving birth to a daughter named Angela. As soon as Richards was well enough to pick up a guitar, he strummed the first chord of the song and said the name "Angie." Richards said he wrote the rest of the song in about an hour. This is a rare Stones song in that it's not only a ballad, it's also done acoustically. Nicky Hopkins was the Stones' piano player of choice at the time, and that's who you hear. The song went to No. 1 on the US charts, just about 45 years ago, when Mick Jagger was 30. Sir Michael Phillip Jagger, born 75 years ago today in Dartford, Kent, England.