Sports Vault: It took only 37 seconds to turn Riverfront/Cinergy to a pile of dust and rubble 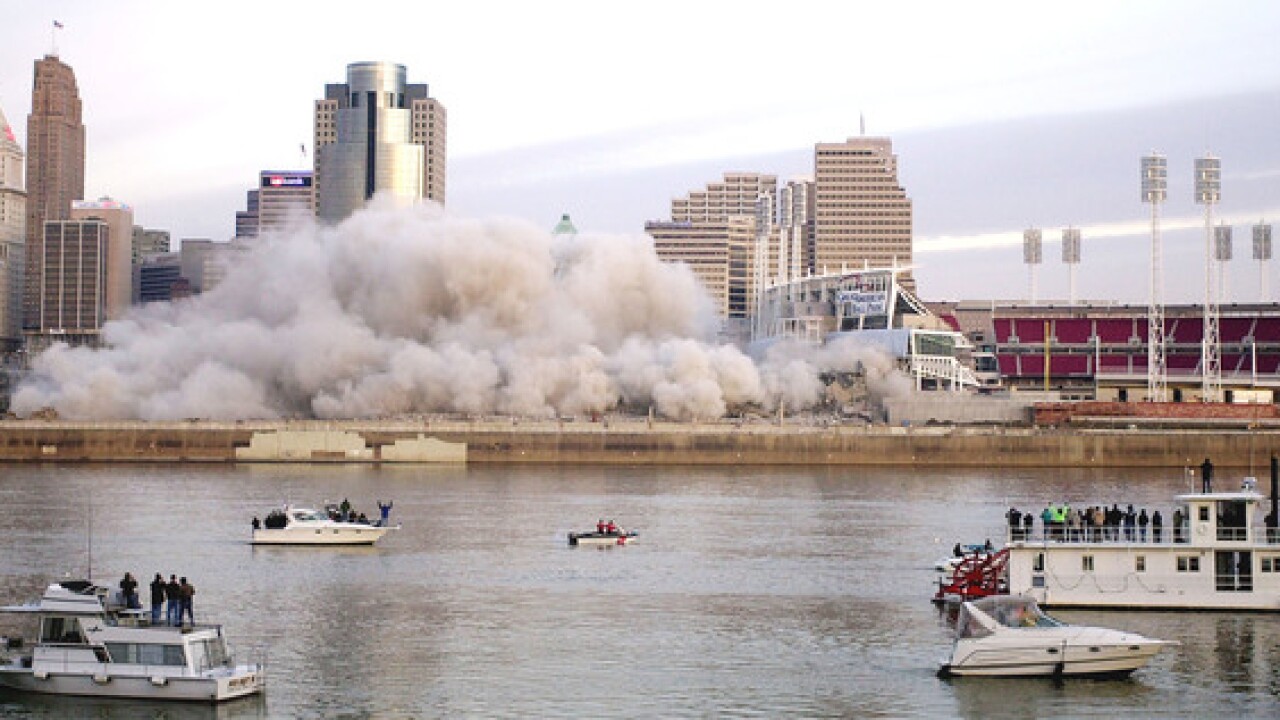 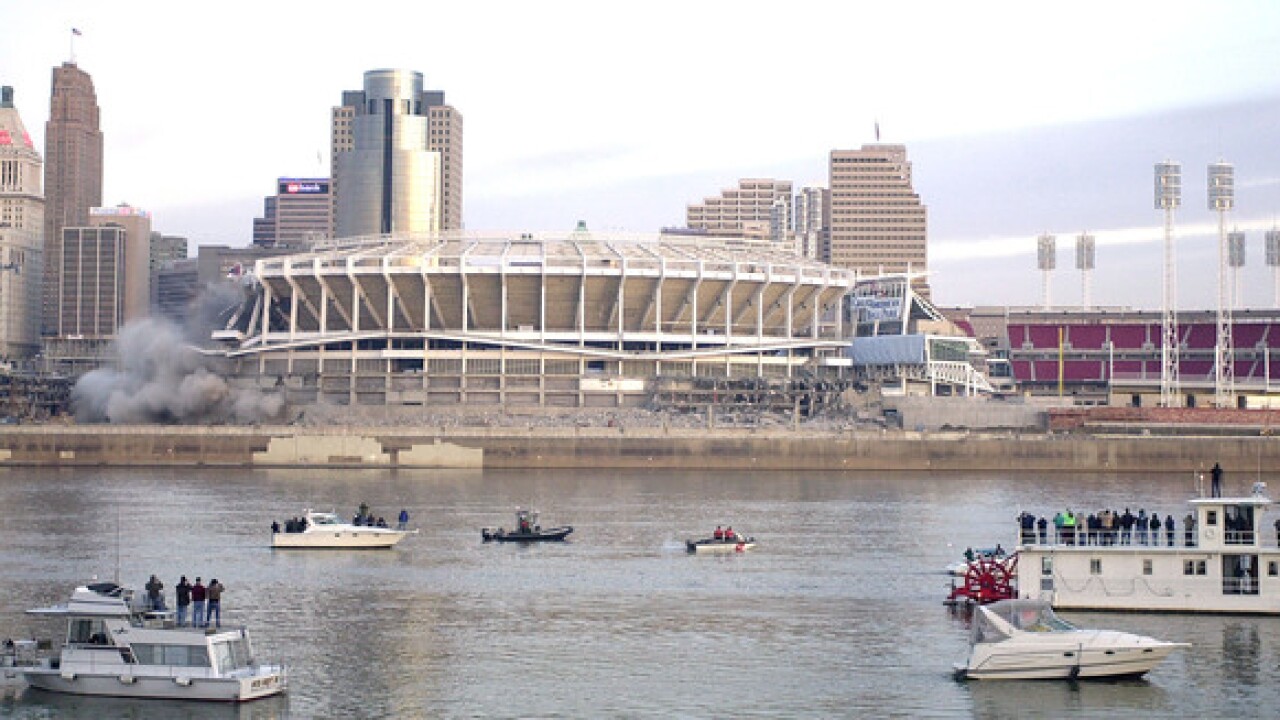 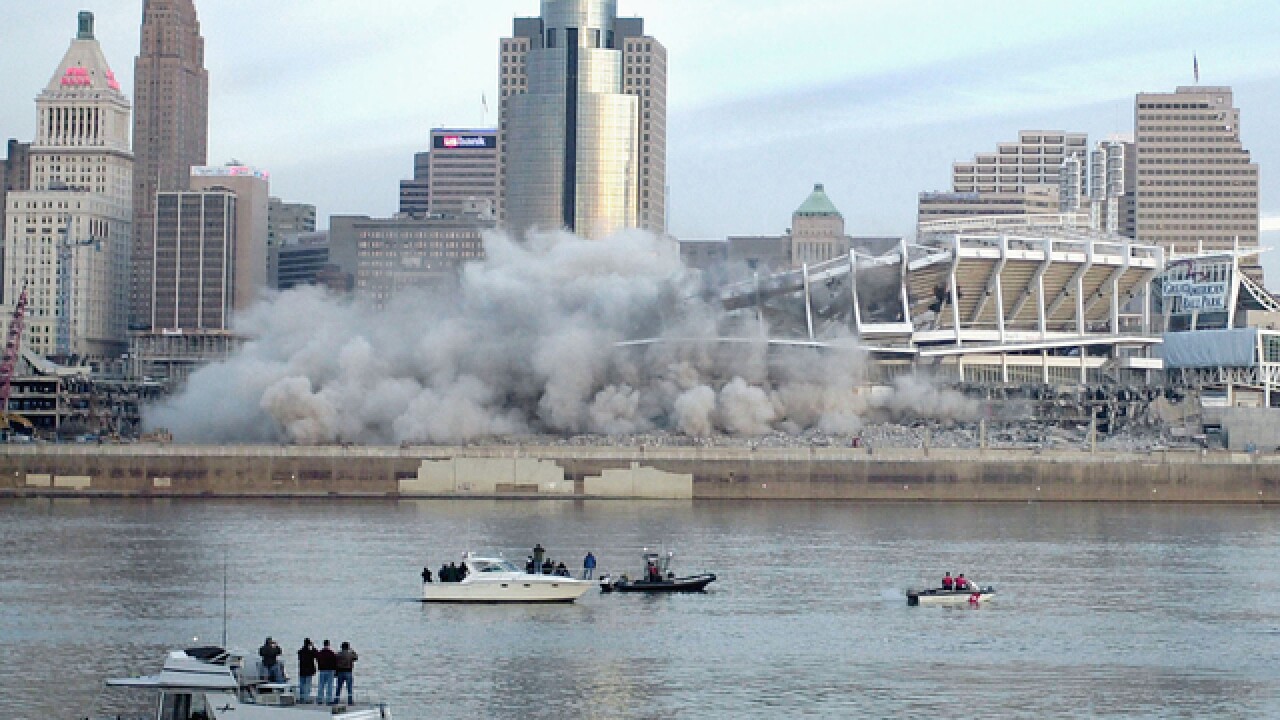 CINCINNATI -- We seem to be caught in a wave of implosion mania. It happens from time to time, mainly when a very large building is about to be demolished.

I remember, in my hometown of Louisville, when MTV visited in 1993 for an implosion of some old warehouses. Music Television was there to film the implosion to help promote the Sylvester Stallone film "Demolition Man." I think the implosion may have been more exciting than the film.

More recently, we've been consumed by implosion madness again, specifically when the Georgia Dome was scheduled to be demolished in November. Of course, it really went viral when the live feed of the implosion provided by The Weather Channel was interrupted by an Atlanta commuter bus that pulled up in front of the camera just as the dome collapsed.

Then there was the attempted implosion of Detroit's Silverdome on Dec. 3, where video showed -- after numerous flashes and smoke -- no implosion at all. After that failure, the old stadium was finally imploded successfully the next day.

Why are we so fascinated by such destruction? Is it because a place that gave us so many memories is being taken away? Or is it the sheer chaos of seeing a huge facility almost instantly disappear?

And it is for those reasons that we flash back to Dec. 29, 2002, where in just 37 seconds, Cinergy Field (formerly known as Riverfront Stadium), went up in implosion-fueled smoke.

("Since then," says a writer from Cincinnati-transit.com, "you could always pick a foreigner out of a crowd when they called the place by its sissy alias. Every real Cincinnati sports fan still called it 'Riverfront' or just 'The Stadium.' I'm going to continue that stubborn tradition on this website until someone gives me a good reason otherwise.")

Ronny Salerno, writing for his Queen City Discovery blog, recalled watching the implosion as a child from his Mount Adams home.

"My parents woke up my sisters and I early, it was still dark out," he wrote. "We put on winter clothes and shuffled outside to the balcony, looking down at the city below. We weren’t the only ones; every nearby balcony was filled with onlookers gazing in the same direction towards Riverfront Stadium, known in its later years as Cinergy Field. In a few short minutes, the shell of the stadium that remained would be nothing more than a pile of rubble, its modern replacements flanking its sides."

So many memories for one structure, some good, some tragic. Others just legendary.

Of course, the building was also host to three World Champions in baseball, including the Big Red Machine. Pete Rose broke the single-season hit record there. Hank Aaron tied the career home run record. The Bengals won AFC Championships in 1981 (the Freezer Bowl) and in 1988. The Rolling Stones played there twice, as did Paul McCartney.

And then there was Opening Day 1996, when umpire John McSherry collapsed on the field in the first inning and died.

"Riverfront was where I saw my first baseball game," Salerno wrote. "I was too young to understand why everyone was upset when they changed the name to Cinergy Field, but I still liked the place nonetheless. I enjoyed Bengals games and Reds games there. I always thought it was interesting to see the faded lines of the Bengals gridiron in the Reds outfield, not yet old enough to long for natural grass or to realize how abysmal AstroTurf was."

Dec. 29, 2002, was a chilly, sunny morning, perfect for a demolition. Thousands of spectators filled Downtown to watch and, in some cases, to say goodbye to those memories.

"I liked that you could sit in the blue seats and look straight up, seeing the perfect circle of the stadium's outline," Salerno wrote. "I liked the bridges that carried you over the highway from the city, the ones that echoed with the guys who beat plastic buckets in a rhythm for tips. I can still remember the policy audio recording that played out front, the peeling paint of the parking garage entrances, and the First Aid room my Dad and I visited when I threw up during a Bengals preseason game against the Jets."

"To prepare for the implosion, blaster Steve Pettigrew and his team drilled more than 2,500 holes in concrete supports throughout the 1,600-foot long structure, the website said. "The holes were then loaded with approximately 1,800 pounds of 40 percent nitroglycerin-based explosives. Linear-shaped RDX charges were also attached to the steel supports of the upper grandstand to ensure an inward, smooth-flowing collapse toward the playing field."

At 8 a.m., spectators saw the dynamite explode through the concrete supports and turn the stadium to rubble.

"Then came the rumbling and crashing of thousands of tons of concrete into the center of the bowl," Greg Noble of WCPO.com wrote later. "Dust and smoke rose 200 feet, obscuring the view from some of Downtown's tallest towers, but the cloud dissipated in 15 minutes."

"From a liability standpoint, the implosion was the most difficult stadium blast ever attempted," wrote ImplosionWorld.com.

"Standing less than 24 feet to the east were hundreds of floor-to-ceiling height windows along the perimeter of the new Great American Ball Park. To the west sat the John A. Roebling suspension bridge, Cincinnati's most prominent historic landmark dating to the Civil War era.

"After the implosion, it was determined that not a single window was broken in the new stadium, and both adjacent structures were left completely unharmed."

Overall, the demolition cost about $15 million.

"I was sad to see the place go, but excited for the two newer stadiums and the massive redevelopment project they represented," Salerno wrote.

"Even at 13, I was able to see the bigger picture, the expansion of the city grid, the hope for the future, the chance to completely revitalize what I saw and still know as home."