From The Vault: Cinergy Field goes up in smoke, dust 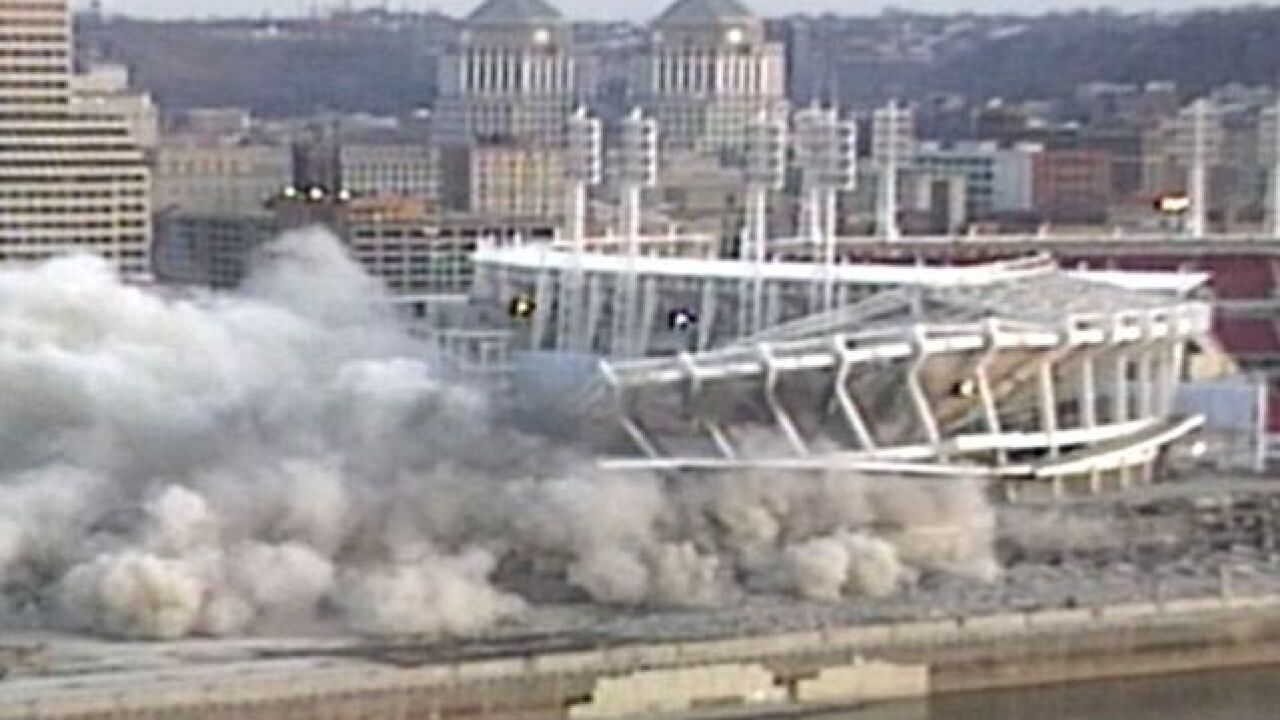 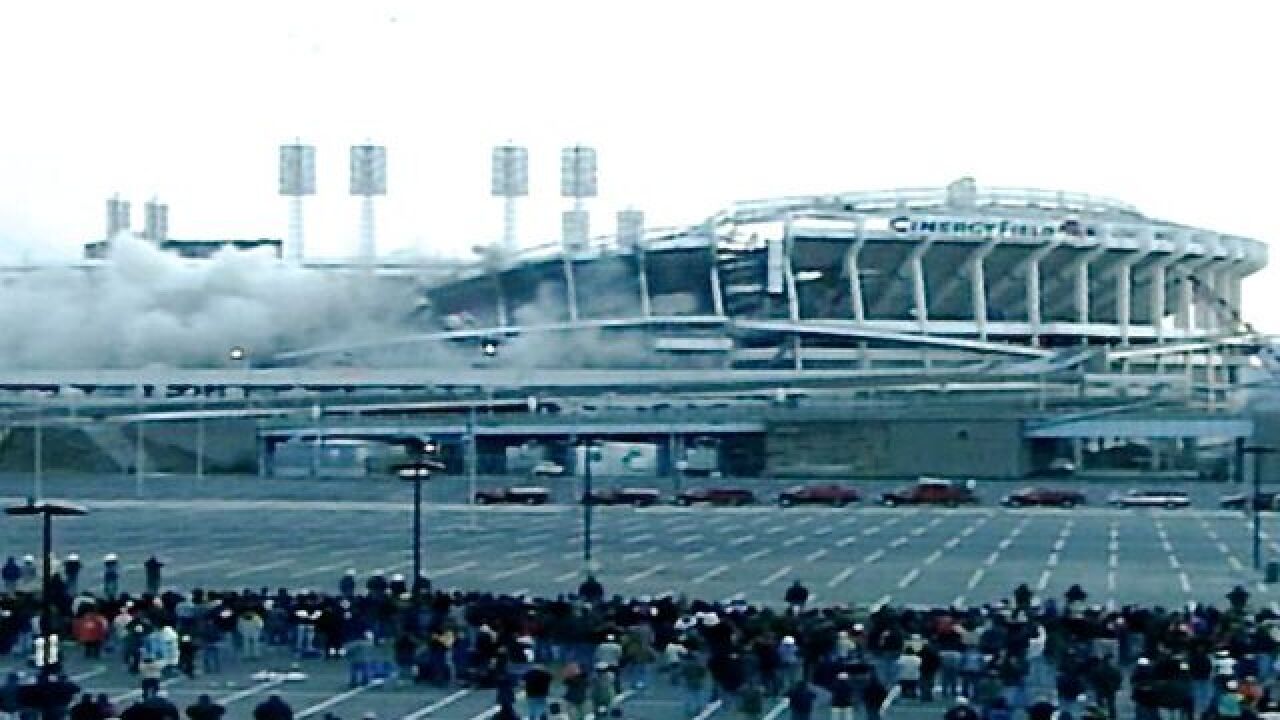 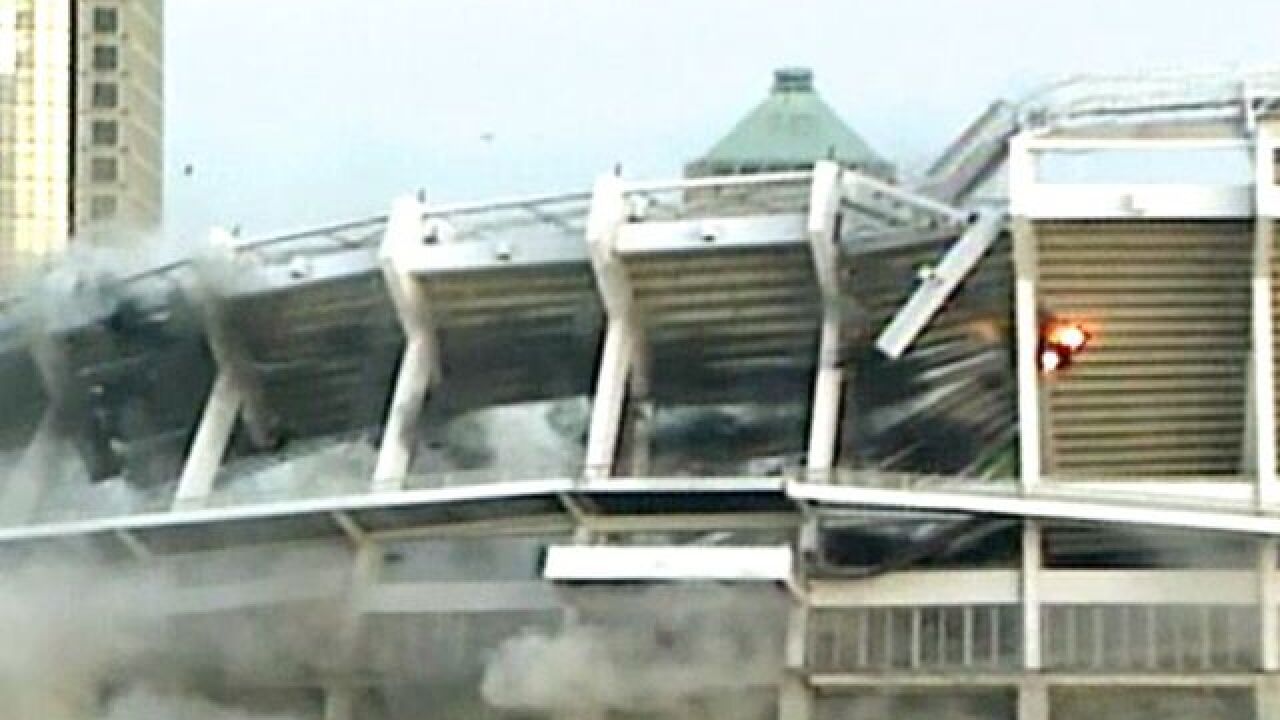 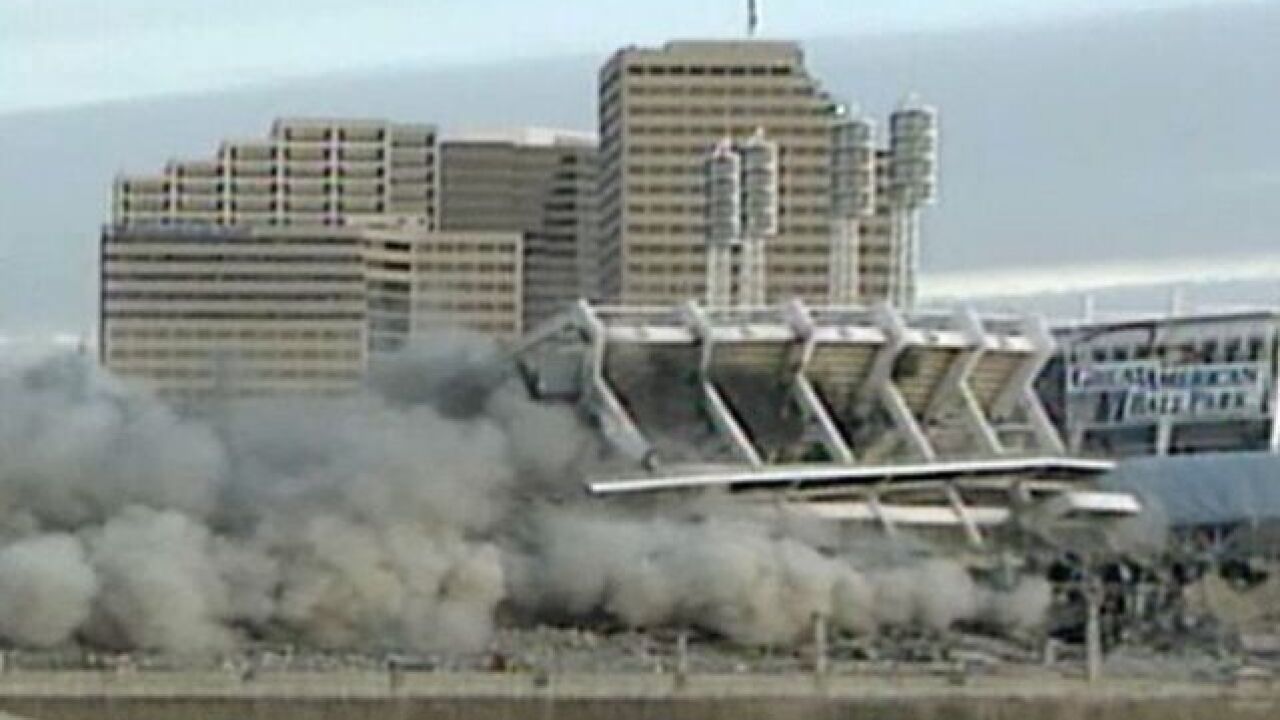 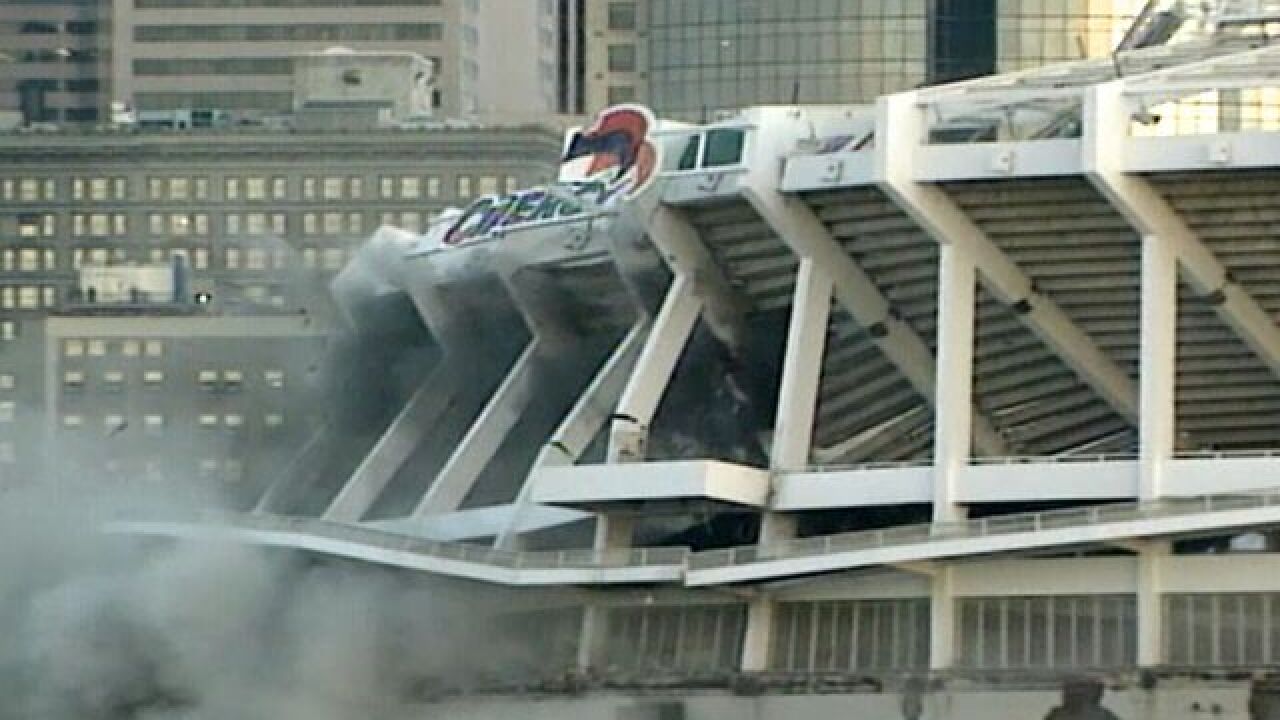 CINCINNATI – It only took 37 seconds for three decades of Reds and Bengals history to go up in dust and smoke on Dec. 29, 2002.

That's when the blasts of 1,275 pounds of strategically placed dynamite leveled Cinergy Field (christened Riverfront Stadium) and turned the maligned but once state-of-the-art bowl into 100,000 cubic yards of rubble.

Thousands of people came to the riverfront on a cold Sunday morning - filling office towers, hotels and restaurants and the Kentucky bank – to watch Cincinnati history and say goodbye to the  landmark stadium that saved the Reds from moving out of town, brought pro football to the Queen City and started the revitalization of the city's riverfront.

At 8 a.m.,  onlookers saw flashes of light rotate in a counterclockwise direction as explosions ripped through the concrete supports. "The stadium boomed repeatedly, like a shotgun blast inside a giant tin can," the Cincinnati Post reported.

Then came the rumbling and crashing of thousands of tons of concrete into the center of the bowl. Dust and smoke rose 200 feet, obscuring the view from and of some of  downtown's tallest towers, but the cloud dissipated in 15 minutes.

One man, watching from the plaza level at Paul Brown Stadium, summed it up in one word.

Every Cincinnati sports fan knows that  Riverfront Stadium, as it was known from its opening in 1970 to 1996,  was home to most of the greatest legends and moments in Cincinnati sports.  But it was more important than that.

The man who brokered the deal to build it for then princely sum of $44 million, Mayor Gene Ruehlmann, said it preserved Cincinnati's status as a major-league sports town. The Reds owner at the time, Bill DeWitt, wanted the city to build a baseball park in Blue Ash, not on the riverfront, and threatened to move the Reds to San Diego, Ruehlmann said. The mayor assembled a new ownership team that bought the Reds from DeWitt.

And Cincinnati would have never been awarded a football franchise in 1966 if it hadn't agreed to build a new stadium, he said.

At the time, most cities spending taxpayer money opted to build a single multi-purpose sports stadium. The flying saucer look was en vogue and that's how Cincinnati ended up with a "cookie-cutter" stadium that looked just like the ones in Pittsburgh, St. Louis, Philadelphia, Atlanta, New York  and Washington, D.C.

Athletes hated the AstroTurf and blamed it for knee injuries, but it cut down on maintenance and saved the Reds from rainouts (and even a snowout when 4 inches fell on Opening Day morning  in 1977).

But Riverfront had special features that made it stand out from the others, notably:

> It was the first ballpark to have sliding boxes instead of dirt basepaths. All of the other "new" stadiums converted to sliding boxes within a few years after Riverfront opened.

> A track built into the field allowed the seats on the third base side to be moved into left field so they lined up along the sideline for football games and put fans much closer to the action.

"In the 60s, Riverfront was state-of-the art and envied by everyone looking at stadiums," Ruehlmann told The Post in a 2002 interview. "When it opened, there were none better."

> The ballpark gave birth to the Big Red Machine, with its four World Series in the 70s and two World Championships, and another wire-to-wire championship team in 1990. Four Hall of Famers emerged from the BRM, including Joe Morgan, Johnny Bench,  Tony Perez and Sparky Anderson. Pete Rose would have made five. Barry Larkin went to Cooperstown from the 1990 World Champs.

> The tragedy happened on Opening Day 1996 when home plate umpire John McSherry collapsed on the field in the first inning and died. The game was postponed to the next day.

> Paul Brown resumed his legendary coaching career with the Bengals and took them to the playoffs in just their third year, a record at the time.The Bengals won AFC championship games in 1982 and 1989 and earned trips to the Super Bowl. In 1982, they beat the Chargers in the Freezer Bowl, so dubbed because it was the coldest NFL game ever played (−59 °F wind chill).

> Tackle Anthony Munoz had an outstanding career and earned election to the Pro Football Hall of Fame in Canton.