Popo in 9: The Reds are riding a seven-game winning streak (no, seriously) 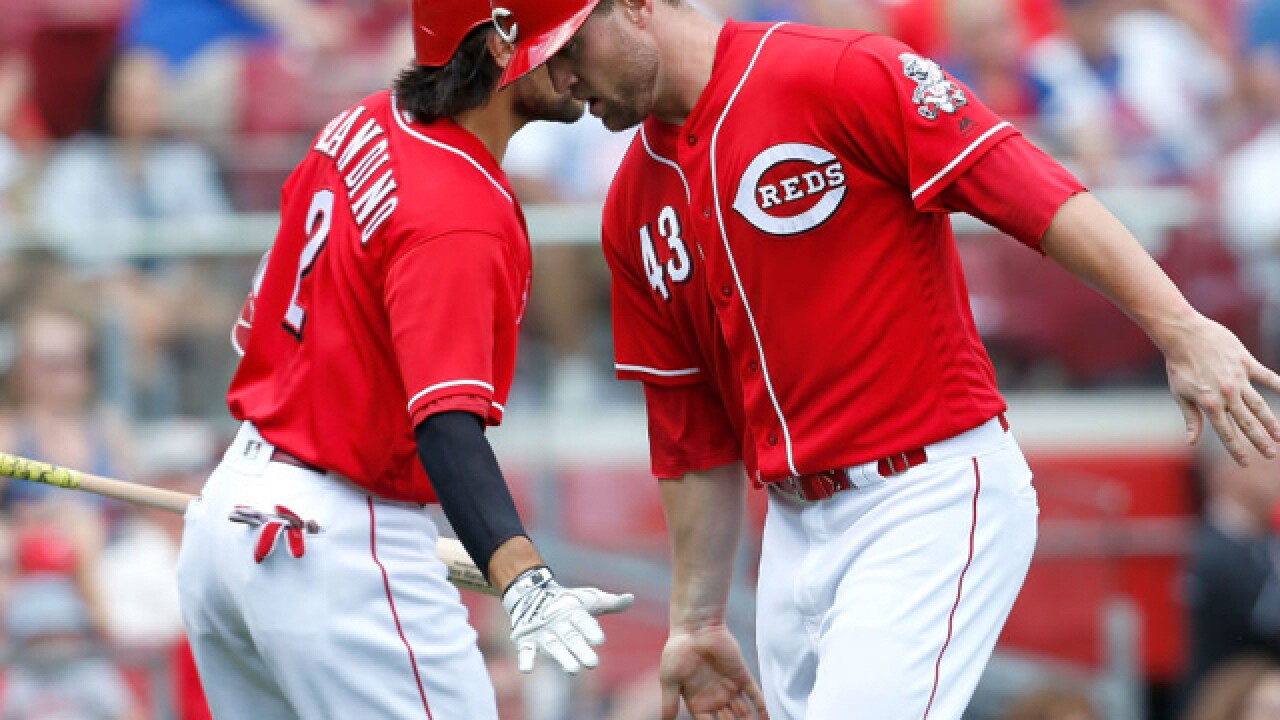 Copyright 2018 Scripps Media, Inc. All rights reserved. This material may not be published, broadcast, rewritten, or redistributed.
Kirk Irwin
<p>Alex Blandino #2 of the Cincinnati Reds congratulates Scott Schebler #43 after scoring the go ahead run during the seventh inning of the game against the Chicago Cubs at Great American Ball Park on June 24, 2018 in Cincinnati, Ohio. Cincinnati defeated Chicago 8-6. (Photo by Kirk Irwin/Getty Images)</p>

CINCINNATI -- It's the start of the last week of June -- and it’s hard to believe that half of this year is already gone!

1. If you've been out of the country or out of touch, you're going to think I'm out of my mind when I tell you that the Cincinnati Reds are riding a seven-game winning streak. There were times in April we didn't think this team would win seven games the entire season.

2. The Reds defeated the Cubs 8-6 on Sunday, the first time they've swept the Chicago Cubs in a four-game series since April 1983.

3. On Sunday, the Reds trailed 5-0 and 6-1. They got a pinch hit home run from Michael Lorenzen; that was a solo shot. Then Jesse Winker came off the bench and pinch hit a three-run home run in the big seventh inning.

4. Sal Romano started and pitched well for four innings.  He didn't pitch well in the fifth when he gave up five runs. The bullpen gets the credit for this one: Kyle Crockett, Jackson Stephens, Amir Garrett and Raisel Iglesias. Garrett had 3 strikeouts in the eighth, and Iglesias got his 13th save.

5. The Reds and Cubs are done in Cincinnati for the season. They've played here 10 times. They'll play 10 more times, but all those games will be at Wrigley Field.

7. In the World Cup on Monday, it’s Saudi Arabia vs. Egypt and Uruguay vs. Russia, both in Group A. Then it's Iran vs. Portugal and Spain vs. Morocco in Group B.

8. The NBA Awards will be given out Monday night. All those nauseating debates about MVP will be settled. Oscar Robertson will be given the NBA's Lifetime Achievement Award.

For the first time the Hall inducted entire teams, and they were exceptional. Those inducted: The 1976 Moeller football team that also won the national championship -- coach Gerry Faust was there -- and the 2003 St. Ursula volleyball team that went undefeated in winning the state championship. Coach Julie Perry and several of her players were there.

I love the old stories. Dennis Janson and Paul Keels do a great job with the emcee work. Congrats to the LaRosa family for doing this better than ever over the years.

No June swoon for the Reds ... I hope this is a good final week. Follow me on Twitter at @Popo_WCPOSports.