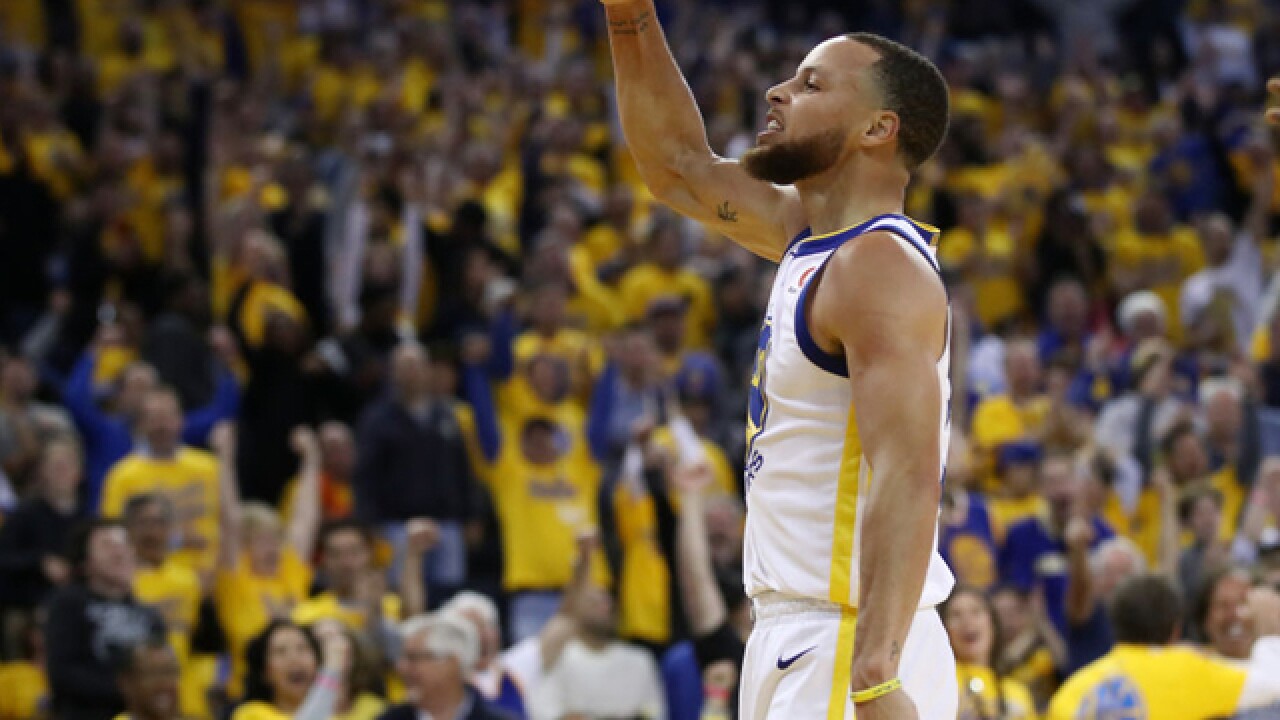 Copyright 2018 Scripps Media, Inc. All rights reserved. This material may not be published, broadcast, rewritten, or redistributed.
Ezra Shaw
<p>Stephen Curry #30 of the Golden State Warriors reacts after a play against the Houston Rockets during Game Three of the Western Conference Finals of the 2018 NBA Playoffs at Oracle Arena on May 20, 2018, in Oakland, California. (Photo by Ezra Shaw/Getty Images)</p>

On this date in sports history in 1951, the Dodgers scored 15 runs against the Reds in the first inning in Brooklyn; Duke Snider, Pee Wee Reese and Billy Cox each batted three times in that inning. The Dodgers won the game 19-1.

1. The Houston Rockets won a game at home, but they didn't come close on the road. The Golden State Warriors beat the Rockets 126-86 in Game 3 of the Western Conference finals Sunday night. Steph Curry was perfect in the third quarter, going 7-for-7 from the field and adding 18 points; he had 35 for the game. Guess all those experts who said he was struggling were wrong. Again.

2. Game 4 for Houston and Golden State is Tuesday. Meanwhile it's Game 4 for the Cleveland Cavaliers and Boston Celtics in Cleveland tonight. The Celtics lead the Eastern Series 2-1.

3. The Reds got beat Sunday 6-1 by the Chicago Cubs, who won three out of four games in the weekend series. Tyler Mahle keeps getting burned by the long ball. Kyle Schwarber, Javier Baez and Ben Zobrist got him Sunday. Mahle has given up 13 home runs so far -- he leads the Reds in that department.

4. Home runs are one issue, but walks are an epidemic. The Reds allowed 30 walks this weekend to the Cubs. That's a Reds franchise record -- and they should not be proud of it. Ian Happ walked nine times alone.

5. Ed Carpenter has the pole for the Indianapolis 500. He turned four laps (10 miles) at a very fast average of 229.618 miles an hour. It's the third pole for Carpenter, who grew up in Indianapolis and still lives there.

6. The Vegas Golden Knights are in the Stanley Cup Finals. You might say, “So what?” But you should know that this is the first year the Knights have existed. This kind of thing just doesn't happen in professional sports. The Knights lost the first game of the Western Conference finals to the Winnipeg Jets, and then they swept the next four.

8. Best moment of the weekend: Justify won the Preakness. He won with another strong finish, but he got pushed, and it was a fun race to watch even in a thick Baltimore fog. He'll go for the Triple Crown in three weeks at Belmont Park.

9. Farewell to Peter King's involvement with MMQB, Monday Morning Quarterback, a must-read for the last five years. He is going still be busy with NBC Sports, but not with the grind of the MMQB. They have some tremendous writers, so I'm sure the site will still be great. But it will be without King's voice. And his contacts. And his insight. By the way, Peter is an Ohio U. guy who spent some years in the early ’80s with the Enquirer. He’s always an interesting read.

Hope you make it through Monday. Give it your best shot.