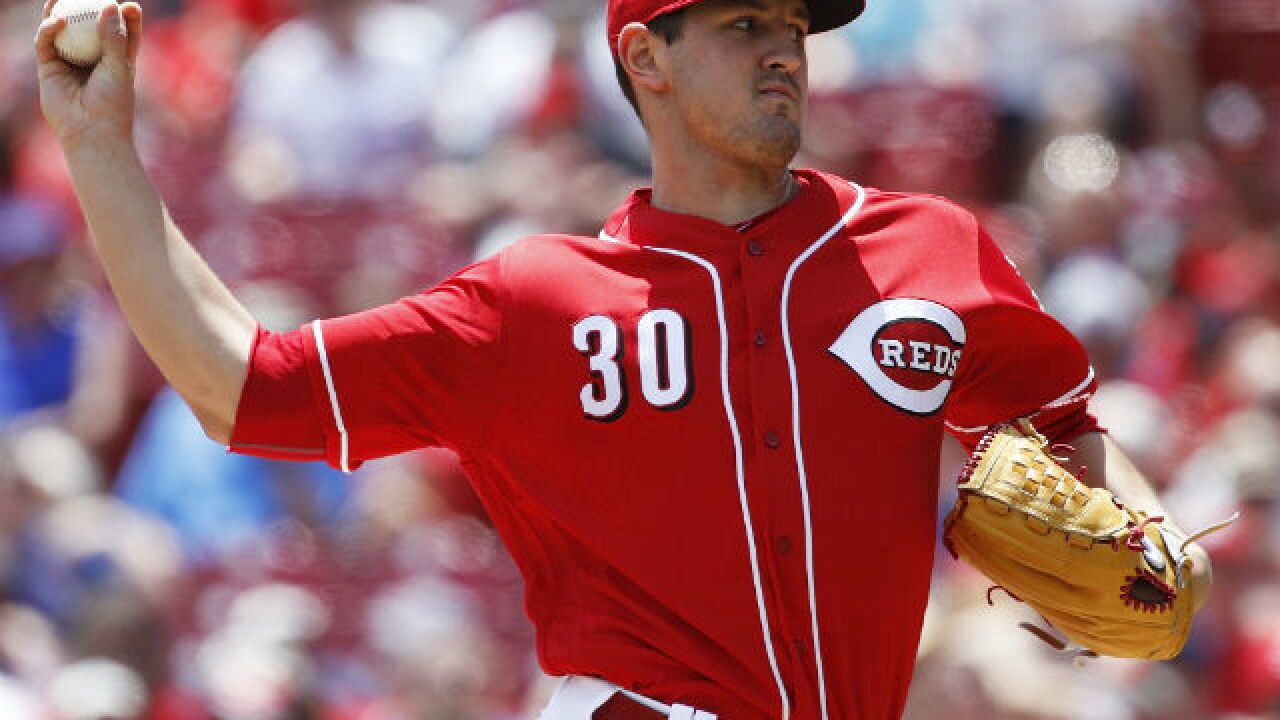 Image copyright 2018 Getty Images. All rights reserved. This material may not be published, broadcast, rewritten, or redistributed.
<p>CINCINNATI, OH - MAY 20: Tyler Mahle #30 of the Cincinnati Reds pitches in the second inning against the Chicago Cubs at Great American Ball Park on May 20, 2018 in Cincinnati, Ohio. (Photo by Joe Robbins/Getty Images)</p>

CINCINNATI - If Tyler Mahle is going to become a reliable major-league starter, he's got to avoid the gopher ball.

The promising Reds rookie gave up three more home runs to take the National League lead Sunday, and with the Reds hitters completely outmatched by Cubs pitchers over the weekend, Mahle was destined for defeat.

Middletown native Kyle Schwarber launched a two-run drive in the second inning followed by Javier Baez's solo shot, and Ben Zobrist homered in the fifth to help the Cubs take three of four in the series with a 6-1 victory.

Mahle (3-6) passed Homer Bailey for the league lead in homers allowed with 13. The right-hander has given up 10 of those homers to left-handed hitters, including all three Sunday.

"If you don't throw good pitches to anybody, you're not going to have a good start," the rookie said. "All the home runs were on pitches that weren't located well. Anything slower, they are going to see it. When they're left over the plate, that's never good."

The Cubs reached Mahle for seven hits, two walks and four runs in six innings. He struck out six.

Except for their 5-4 win Saturday afternoon, the Reds got one or no runs and no more than three hits in the other games.

Yu Darvish (1-3) recovered from a shaky start to earn his first win with the Cubs. Darvish went six innings and allowed only two hits, both in the first, during his eighth start since signing a $126 million, six-year contract with Chicago last offseason.

In his second outing since coming off the disabled list Tuesday, the four-time All-Star overcame a 39-pitch first inning and finished six innings for the third time this season. He allowed one run with three walks and seven strikeouts.

"Darvish was throwing some off-speed stuff and this and that," Reds interim manager Jim Riggleman said. "All of a sudden, he decided to throw some hard stuff in an area up around the chest that was very hard to hit and very hard to lay off of."

"It was great to come out here and swing the bats well and have the pitchers do what they did," said Schwarber, ejected by plate umpire John Tumpane for saying something after taking a called third strike to end the seventh. "The Reds played good out there (in California). We knew that coming in."

The Reds are 2-5 since sweeping the Dodgers in a four-game series at Los Angeles for the first time since August 1976.

The Reds scored their only run on Scott Schebler's bases-loaded infield single with two outs in the first. Cubs shortstop Addison Russell went deep into the hole to backhand the ball, but he couldn't hang onto it.

Darvish retired the following eight batters and nine of the next 10.

Schwarber gave the Cubs a 2-1 lead in the second with his first home run since April 26.

Baez, who went into the game leading the National League with 37 RBIs, followed with his first since May 7.

Zobrist led off the fifth with his second homer of the season and first since April 8.

Schwarber and Baez gave Chicago its first set of back-to-back homers this season.

After the Reds and Cubs meet in a four-game series June 21-24 at Great American Ball Park, the teams will have completed their season series in Cincinnati while still waiting to play their first game in Chicago.

Baez ranged behind second base to make a sliding grab of Votto's fifth-inning grounder, tagged the bag with his glove to force Alex Blandino and popped up to throw out Votto and complete the inning-ending double play .

An intentional walk to Ian Happ in the ninth was the 30th walk issued by Reds pitchers in the series, a franchise record for a four-game set.

Cubs: 3B Kris Bryant was sore after sliding hard into bases a couple of times during Saturday's doubleheader. Happ started at third base.

Cubs: RHP Tyler Chatwood (3-3) starts Tuesday night at home against Cleveland in a rematch of the 2016 World Series. Chatwood is 1-1 with a save and a 2.70 ERA in four career appearances, including three starts, vs. the Indians.