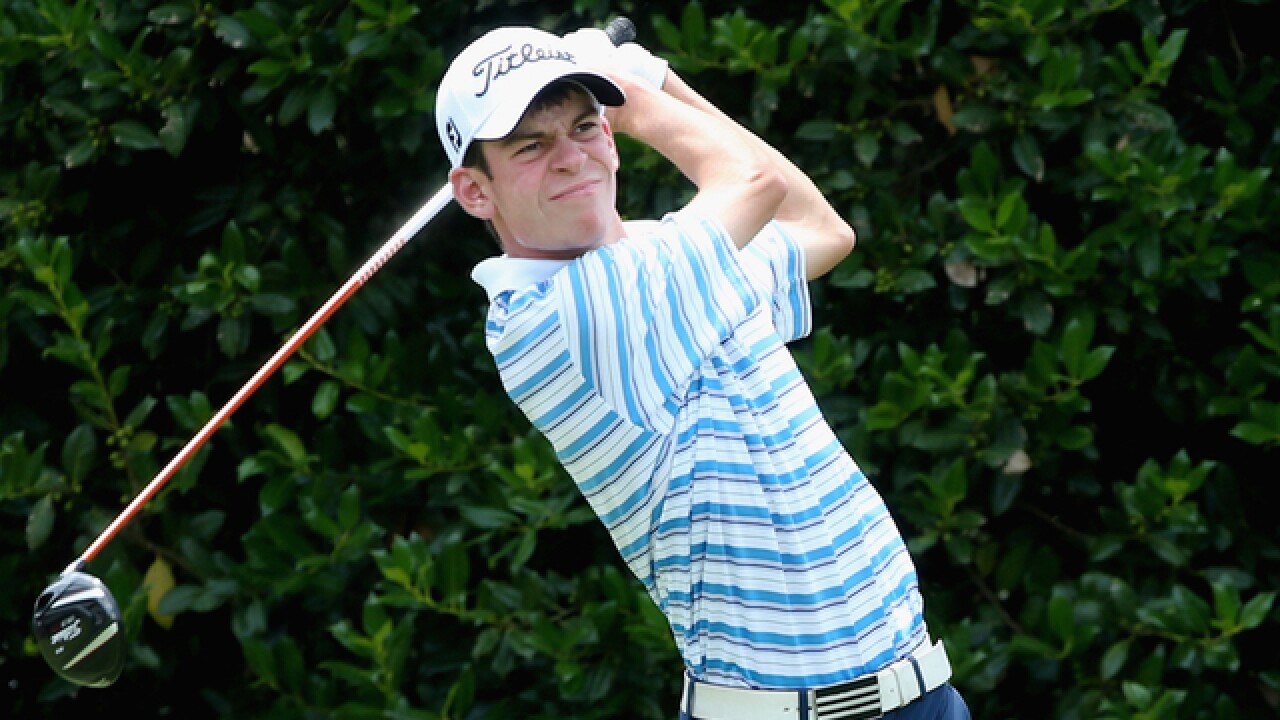 Copyright 2018 Scripps Media, Inc. All rights reserved. This material may not be published, broadcast, rewritten, or redistributed.
Andrew Redington
<p>Amateur Will Grimmer of the United States watches a shot during a practice round prior to the start of the 114th U.S. Open at Pinehurst Resort & Country Club, Course No. 2 on June 9, 2014 in Pinehurst, North Carolina. (Photo by Andrew Redington/Getty Images)</p>

CINCINNATI -- Good afternoon, everyone! Here’s some sports news you need to know today.

1. Will Grimmer has qualified for his second U.S. Open. He first qualified in 2014 while he was still a student at Mariemont. On Monday, he was the top qualifier at the Sectional in Springfield, Ohio, with rounds of 66-69; that’s 5-under par. He’ll be a senior this fall at Ohio State.

2. On this date in 1985, Walton, Kentucky, native Steve Cauthen won the Epsom Derby aboard Slip Anchor, becoming the only American jockey to win both the English and Kentucky derbies. Cauthen rode Affirmed to the Triple Crown in 1978.

3. The Cincinnati Reds took a third baseman and two pitchers in the first three rounds of Monday’s MLB Draft. The Reds took Jonathan India, a third baseman from the Florida Gators, with the fifth overall pick in the first round. India was the player of the year in the SEC. With their pick in the second round, the Reds took right-handed pitcher Lyon Richardson from a high school in Port St. Lucie, Florida. In the third round, the Reds took Josiah Gray, another righty from Lemoyne College.

4. There was no baseball for the Reds on Monday night. They’ll begin a three-game series at Great American Ball Park tonight (Tuesday) against the Colorado Rockies.

5. Dwight Clark has died. He was a 10th-round draft pick out of Clemson who became one of Joe Montana’s prime targets with the San Francisco 49ers. Clark made “The Catch,” known as one of the most famous plays in the history of the NFL. Montana was fading to the right, trying to outrun the pass rushers, and he found Clark in the back of the end zone. The 49ers beat the Dallas Cowboys to win the NFC title with the catch and went on to beat the Cincinnati Bengals in Super Bowl XVI.

6. The Washington Capitals are one win away from their first Stanley Cup title. The Caps routed the Vegas Golden Knights 6-2 on Monday night to take a 3-1 lead in the finals. Game 5 will be Thursday in Las Vegas. No team since the 1942 Red Wings has blown a 3-1 series lead in the finals.

7. CM Newton has died at the age of 88 in Alabama. Newton was a member of Kentucky’s 1951 NCAA Championship team, but he made his name as a coach and administrator. He had a long coaching career at Transylvania, Alabama and Vanderbilt and then came back to Lexington as Kentucky’s athletic director. He hired both Rick Pitino and Tubby Smith and was named to the Basketball Hall of Fame in 2000.

9. Two climbers have set a speed record on El Capitan in California’s Yosemite National Park, breaking a record that some compare to the 4-minute mile. Alex Honnold and Tommy Caldwell scaled the 3,000-foot granite wall Monday in two hours, one minute and 53 seconds.