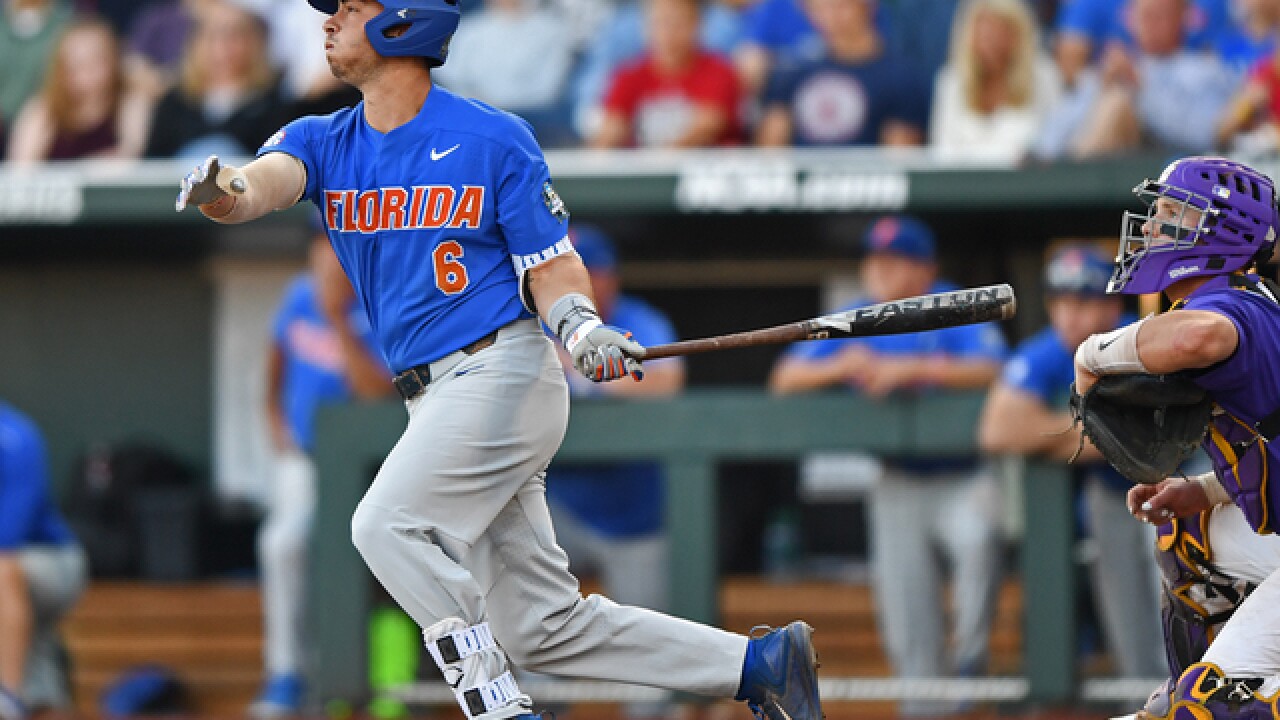 CINCINNATI -- The Cincinnati Reds were on the clock in Monday night's Major League Baseball Draft when Florida Gators third baseman Jonathan India was batting in the fifth inning of an NCAA Regional.

India walked. He also struck out twice in a loss at Florida Atlantic, but that wasn't going to deter the Reds from selecting him with the No. 5-overall pick.

"When he struck out, we thought about changing our pick," Reds president of baseball operations Dick Williams said facetiously. "He's an accomplished and advanced college hitter. He should move quickly through the minor leagues. We are thrilled to add him to our organization."

India had been on the Reds' radar for quite some time. They scouted the 2018 Southeastern Conference player of the year throughout his rise from relative obscurity to becoming one of the nation's best hitters.

Adjustments he made during two summers in the Cape Cod League elevated India's draft stock and caught the Reds' attention.

His on-base percentage had dipped to a career-low .351 last season but in one year he increased his OPS from .774 last season to 1.237, helping him become a semi-finalist for the prestigious Golden Spikes Award and enter the draft rated the fifth-best prospect by Baseball America.

The question now is what the Reds plan to do with India.

With Eugenio Suarez entrenched at third base and another top-five pick in Nick Senzel waiting in the wings, the Reds have an overabundance of young infielders. Senzel was drafted No. 2 overall in 2016, also as a third baseman.

The Reds already are trying to figure out what to do with four outfielders -- which at least temporarily has sent Jesse Winker to the bench -- and where to play Scooter Gennett moving forward, while trying to find a permanent spot for Senzel.

Unlike the NFL or other sports, major league teams typically don't draft according to position need, especially with higher picks. Chris Buckley, VP amateur scouting, said going into the draft that the Reds would look for the best player available at No. 5 -- regardless of position.

That's what they got in India.

"We think he's the most valuable asset," Williams said. "You can never have too many players. We're starting to accumulate what we think are some pretty good hitters. What (India) did in the best conference in the country speaks to his ability."

Like Suarez, who developed as a shortstop, and Senzel, who has played both second and third this season at Triple-A Louisville, India has the ability to move around.

India played primarily third base this year for the Gators but also made several appearances at shortstop.

"A guy with his athleticism would have no problem moving to second base," Williams said. "Short(stop) is always something you'd want to see for yourself. He'd have no problem in the corners in the outfield."

Because the Gators lost to FAU, 7-4, on Monday night, they had to play again later that night. As a result, India was not made available to speak to reporters. He is expected to do a conference call with media members on Tuesday.

India made a statement with his bat in April when he homered off Auburn right-hander Casey Mize, who was selected No. 1 overall by the Detroit Tigers on Monday.

That game was billed as a marquee pitching matchup between Mize and Gators right-hander Brady Singer, who was drafted 18th by the Kansas City Royals. But, India stole the show with his blast in the first inning.

"That made an impression on me," Williams said.

India was just the 12th player in Florida program history to amass 20 or more home runs, 100 or more RBIs and 30 or more stolen bases in his career.

The Reds also had the 47th pick in the second round later on Monday night, along with the 72nd in Competitive Balance Round B, 82nd (third round) and 109th (fourth round), all on Tuesday.

The addition this year of a third Rookie League club in Greeneville, TN might allow the Reds to sign 15 to 20 more prospects who will have a chance to play regularly.

The Reds' rebuild is centered around the development of young pitching. Since 2004, when the Reds selected Homer Bailey seventh overall, the Reds have taken just five pitchers in the first round, two have reached the major leagues. They are expected to add more arms in this year's draft.

"We have a lot of drafting left to do," Williams said Monday night.