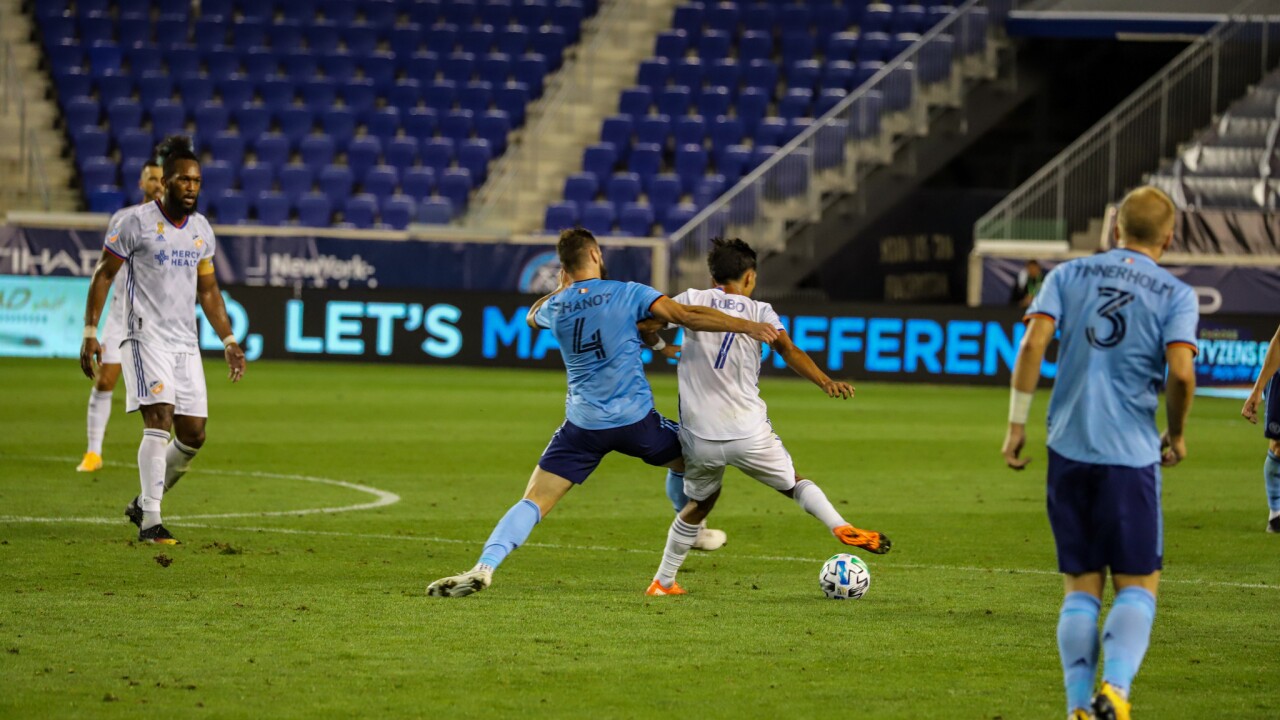 Brandon Vazquez came off the bench to end FC Cincinnati’s club-record scoring drought, but the Orange and Blue still left the pitch disappointed.

FC Cincinnati cut down a two-goal deficit against New York City FC with Vazquez’s tally in the 74th minute Saturday at Red Bull Arena, but the visitors couldn’t find the equalizer and fell 2-1.

The Orange and Blue (2-6-3) now fall to 13th place in the 14-team Eastern Conference, and the only consolation was seeing a 556-minute span without a goal in league play come to a close. FC Cincinnati had several chances in the second half, following a tactical shift in formation after NYCFC scored its second goal, and Vazquez nearly scored a second goal moments after his first but was ruled offside.

FC Cincinnati badly needed a goal to provide some level of confidence in the attack, but still is lacking that extra push early in games and the result leaves the team winless since the group stage of the MLS is Back Tournament.

That’s six games without a win and two straight losses, and the schedule doesn’t get easier heading into the next phase of matches. MLS announced the next three games for each team Friday, and FC Cincinnati plays two of them at Red Bull Arena against New York Red Bulls on Sept. 19 and against NYCFC on Sept. 26.

On Saturday, the Orange and Blue had some close chances early to take their first lead since July 22, but Jurgen Locadia’s goal in the 16th minute was waved offside and New York still controlled the game for the first half. NYCFC scored its first goal on an Alexander Ring shot from near the penalty spot in the 39th minute. It went to review to see if he was offside but the replay showed left back Andrew Gutman just barely kept him in an onside position.

Antwan Tinnerholm doubled the lead in the 55th minute, volleying in a headed pass off a corner kick. It was only then FC Cincinnati began taking more risks with a shift to the 3-4-3 and showing resiliency in responding with a goal, but it wasn’t enough for a much-needed result.

“There’s no happiness,” Stam said. “There’s disappointment. In the second half, you expect from the start a little more. You can see the second goal from a set piece. The ball goes back to the edge of the box. They can have a shot and it goes in. Can’t be happening, to be honest, and there you need to change something.”

Vazquez made the most of his opportunity Saturday, scoring his first goal for Cincinnati one minute after entering the game. Haris Medunjanin fed him a pass into the penalty box, and he rebounded his own shot that had been saved and pushed the second attempt past New York goalie Sean Johnson.

It was a relief for the team to finally get a goal and sparked several other close chances late in the game, including his 76th-minute goal that was waved offside and a point-blank header by Kendall Waston that Johnson saved in the 79th minute. FC Cincinnati finished with 14 shots. Six of those came from Locadia and three from Vazquez.

“I think it’s huge,” Vazquez said. “It is a boost that we need, because I think the last 20-25 minutes, we really showed up as a team. We need to grab that, run with it, and keep doing that from the very first minute of the next game. So, I think we have shown as a group what we are capable of doing once we come off our lines. We need to be doing more of that.”

FC Cincinnati’s 556 minutes without a goal ranks as the fifth longest scoring drought in MLS history, according to the MLS Facts & Record Book available in the media resources on the league website. The 2007 Toronto FC squad holds the league-record longest scoreless streak at 824 minutes. Cincinnati had a 528-minute scoring drought last year.

Vazquez came to the team from Atlanta through a trade during Nashville’s expansion draft; however, his playing time has diminished under Stam. The 21-year-old forward has appeared in eight of the team’s 11 games (with just one start) this season but has seen especially limited minutes since the return to home markets. Going into Saturday’s match, he had played just 32 minutes over two games this phase.

Stam made some unusual substitutions that played into the push for a comeback in the second half, but it paid off in giving the team opportunities to come back.

The shift started with replacing midfielder Siem de Jong with Nick Hagglund and forward Yuya Kubo with midfielder Allan Cruz in the 65th minute. Hagglund became a center back and pushed Mathieu Deplagne to a right wingback role while Joe Gyau moved to forward. Then, in the 73rd minute, Vazquez came on for Caleb Stanko to become a third forward in the 3-4-3, a formation Stam hasn’t shown yet this season.

“You try to change it because you want to have a little bit more spirit up front as well, in terms of having runs from behind and being that threat,” Stam said. “I think we weren’t dangerous enough and you can see that helped. … You make it difficult for them. They can’t get into their rhythm of play, and you create a few very good opportunities. I think it’s a shame that we couldn’t get the equalizer. I don’t even know if it was offside, that second goal from Brandon (Vazquez), but it’s hard. It’s difficult.”

FCC had somewhat limited options with his lineup Saturday because of the absences of center back Maikel van der Werff (groin injury), midfielder Frankie Amaya (yellow card accumulation suspension) and forward Adrien Regattin, whose contract was terminated at his request so he could return to his family in France.

Now Deplagne will miss the next game after picking up his fifth yellow card Saturday.