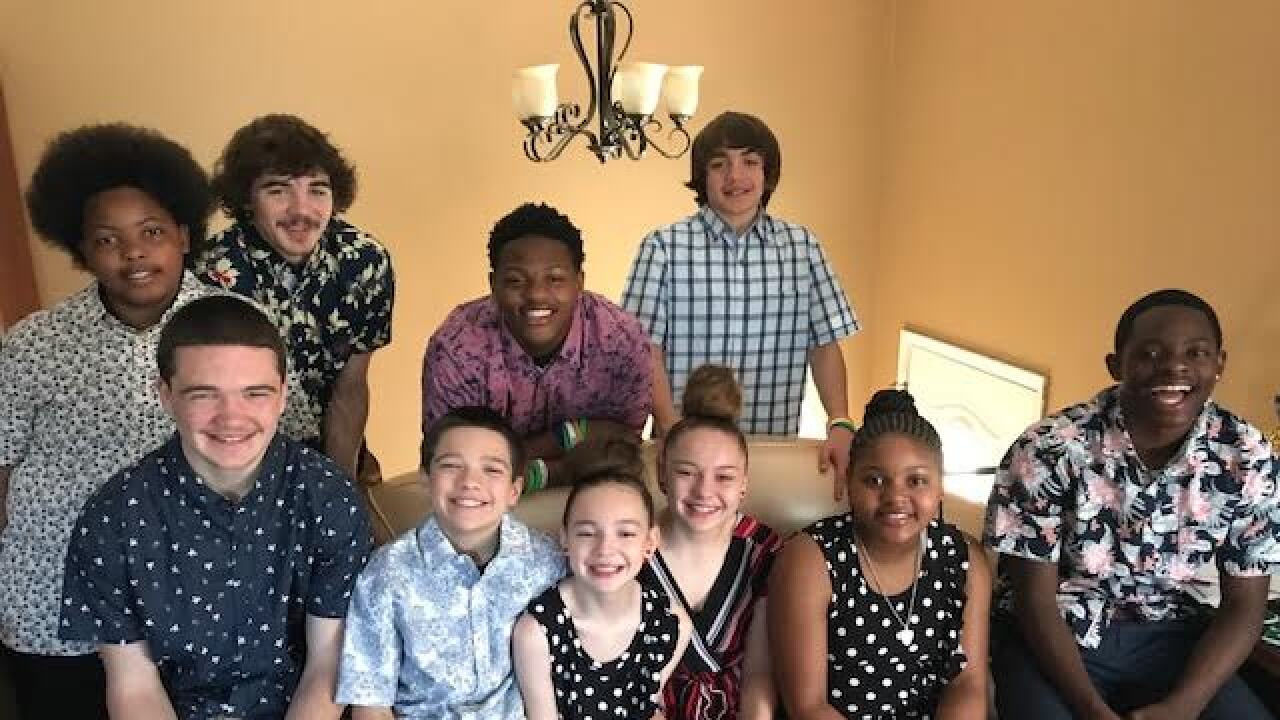 Provided/Christina Sanders
The Sanders family has 11 siblings, five of whom are on the Winton Woods football team this season. Back row (left to right): Chaz, Coby, Cameron and Caleb. Front row: Christian, Carson, Chloe, Caylee, Caitlyn and Caden. Christopher Jr. is not pictured.

“They are high-demand,” Sanders said with a laugh.

With 11 siblings, the Sanders household goes through 10 containers of peanut butter on a weekly basis. The monthly grocery bill can be upward of $1,700. The family drives a Ford Transit, which seats 15 passengers.

Through it all, Christina Sanders and her husband, Chris, simply feel blessed.

The Sanders are used to the daily meal schedule and the needs of their 11 children: Eight boys and three girls ranging from ages 12 to 22.

“It’s very busy,” Christina said. “I just do it. I have to always make sure dinner is made because they are always hungry.”

Two years after his 2015 graduation, Chris and Christina adopted six children in a story that received national attention; four boys had been in foster care with the Sanders family since 2014.

Neither will the commitment to Winton Woods football.

Chris and Christina Sanders are some of the first fans to arrive Friday nights in the home seating section at the 50-yard line at Charlie Fredrick Stadium, a five-minute drive from their home. Christina admits she was hoarse from screaming after last week's 30-7 win over Upper Arlington.

“It’s very special because our family is a big part of the football team," said senior wide receiver Coby Sanders. "It’s five of us, so we are half of the team. So it’s pretty fun. We feel comfortable and all that. It’s good.”

“I’m just happy for all my boys because they put so much work in," Chris said. "And being a teenager is kind of hard for these guys sometimes. I just started pushing these guys to be the best version of themselves that they can be."

Cameron, who had a game-high 14 tackles Sept. 13 against Upper Arlington, said he enjoys the camaraderie of playing with his elder brother, Coby.

Sophomores Christian, Caleb and Caden Sanders are junior varsity players who have games Saturday mornings. Carson and Chaz Sanders are in the seventh grade at Winton Woods Middle School.

“This is something that they want to do,” Chris said. “If I took football away from them, I don’t know what they would be doing. They’ve been doing this for so long.”

Parker said Chris and Christina have instilled the value of effort and commitment into their five sons.

“Really, really hard working kids,” Parker said. “They love each other. They love Winton Woods. They love the school. Very, very unselfish. We do a thing in the offseason where we do an extra lift or an extra run in the morning. They were probably there 99% of the time, which nowadays, when kids have all the excuses and they play other sports, that’s something huge. It’s been a blessing to have them in my life because they make me better. All of them are very, very different personality-wise, but they all make you smile and get after it.”

Cameron and Coby certainly get after it like brothers. The two like to kid each other to see who will have the better game highlights.

“We have competitive goals,” Cameron said. “He will say five receptions and I will say 10 tackles. Whoever gets that by the end of the game — (they) win. We make bets. Probably $5 for whoever makes the most highlight plays or good plays.”

Cameron smiled — Coby has yet to pay up just yet. But he also understands the bigger picture.

“It’s a unique bond,” Cameron said. “I am really glad we are both playing varsity. This is what we always wanted. We’ve been working this hard to do all of this. To be able to do that... I just want to be able to thank God because a lot of people don’t get to do that.”