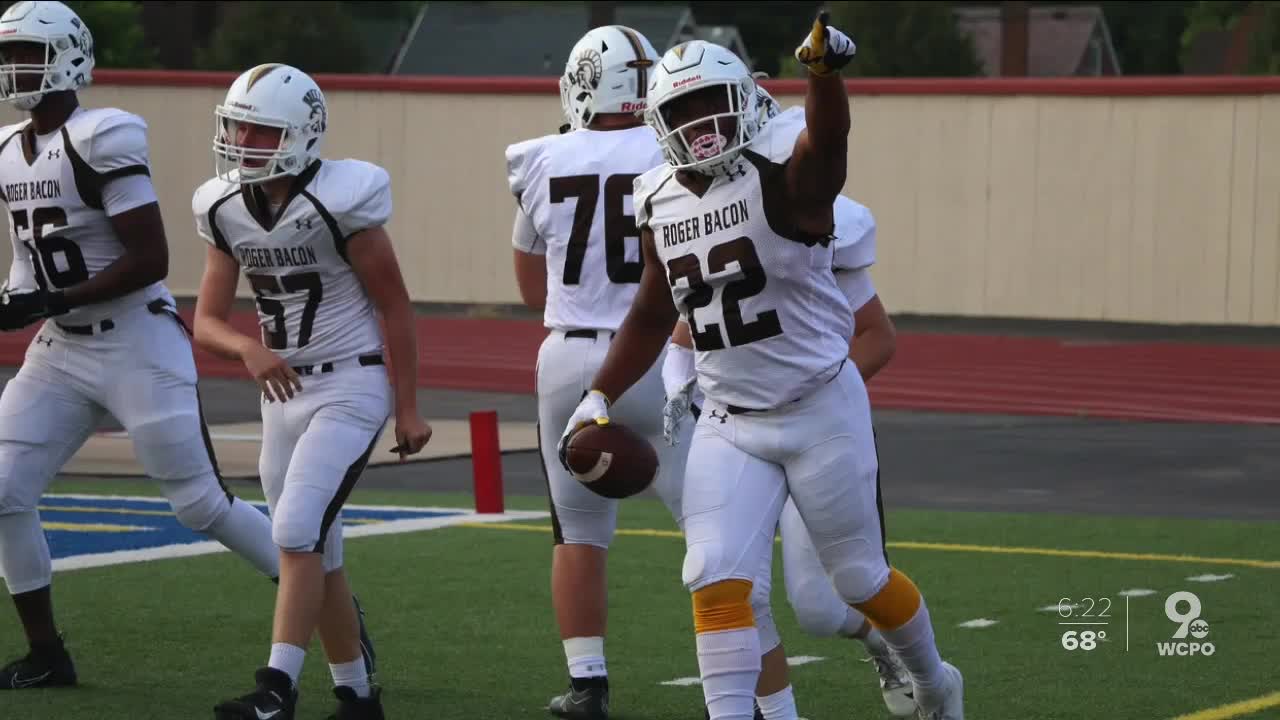 The high-profile college football programs often add music, statistics or game film on their particular team. One head coach spoke during part of a tour.

And just like the splash of an edited photo on social media, everything is geared toward landing a verbal commitment from one of the nation's top high school running backs.

Even though Roger Bacon junior running back Corey Kiner isn't able to set foot into a stadium or try on a team uniform this spring, virtual tours have added another dimension to his decision-making process.

Most programs have conducted virtual tours or are in the process of scheduling those opportunities. Texas A&M, Louisville and Michigan are among the programs who've already connected with Kiner virtually.

"It's fun really in my opinion because it's just like watching a tour on a college on, like, the Discovery Channel or something like that," Kiner told WCPO.

Kiner, rated the nation's No. 10 running back in the 2021 class by the 247 Sports Composite, is one of the most highly sought-after recruits in Ohio.

The 2020 Ohio Mr. Football candidate is also "wide open" in his college recruiting with 10 schools as finalists. That has added to the fervor from college football fans on social media.

"Everybody wants me to go to a certain college or something like that, but I really appreciate the people who just comment, 'No matter where you go I want to see you succeed,'" Kiner said.

Last week, Kiner tweeted his plans to announce a college decision on July 4. When Kiner shared the tweet with the coaches of programs on his top 10 list, most responded with fireworks emoji.

But the main reason for a shortened decision timeline was the coronavirus outbreak and the shift in the college football recruiting schedule.

By announcing his intention to commit on July 4, he's also able to likely secure a spot in the ultra-competitive nature of college recruiting since programs recruit only a specific number of running backs per class. It buys him time to make a decision and to keep the 10 finalists aware of his plans.

"I think that was one of the biggest reasons why he wants to make the decision by July is because who knows when this is all going to break and he can actually get to an actual school and see what the school offers," Roger Bacon coach Mike Blaut said.

Kiner said in late March he planned to make a decision in late August or during his senior season. But those plans have changed as the coronavirus outbreak has raised questions entering this summer about the football practice schedule.

"I won't get to visit every school depending on when everything gets opened back up," Kiner said. "It really hasn't changed much. Of course I have more knowledge on schools that I've visited but the schools I haven't visited, they are giving me virtual tours, sending me a lot of information, getting me in touch with a lot of the members on the staff -- the strength and conditioning, academic advisers -- all those kind of things."

Clif Kiner, Corey's father, said his son didn't want to wait until the end of fall or winter to make a visit if the football season would be delayed due to the coronavirus outbreak.

"At first he was optimistic like everybody else that this was only going to last for a couple of weeks," Clif Kiner said. "But you know going into week four being out of school he's not sure if school is going to open back up or if he is going to get a chance to visit the schools that are on his list. So he did some soul searching a little bit."

Corey narrowed his college choices to 10 schools (in no particular order) in early March after he was inundated with attention from a variety of programs from across the country.

"At one point in time he was getting 200 messages a day," Clif Kiner said.

Kiner has visited some of the schools that have already set up virtual tours as an extension of a previous on-campus visit. He had 28 scholarship offers before he narrowed his list in early March.

Blaut is confident Kiner is doing his due diligence to make the most informed decision this summer.

"He's not going into any of these blind," Blaut said. "I know his dad is not going to let him make a decision without being fully equipped with everything that he needs. He's just doing the best he can during these crazy times."