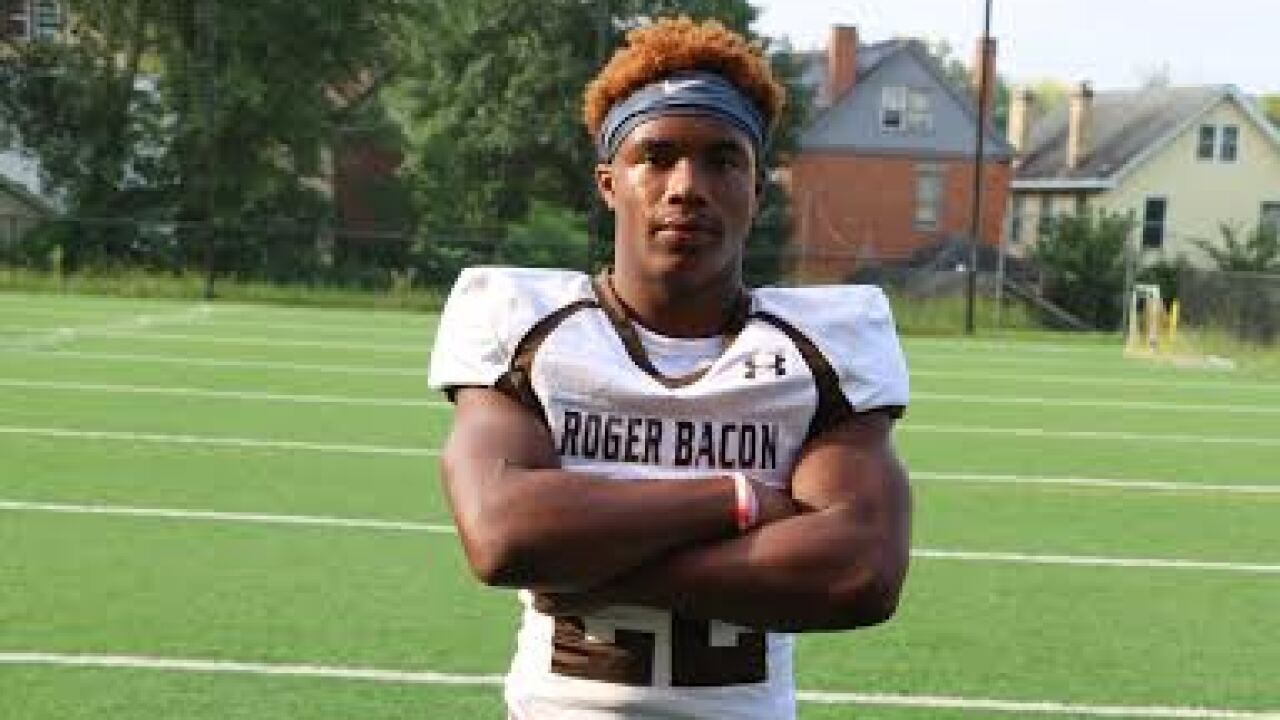 "It kind of hasn't hit me yet," Kiner said Saturday morning as he was traveling to Purdue for a visit. "It will probably hit me on Monday when I go back to school."

Kiner, who scored on the next play of the game, had five carries for 85 yards and three touchdowns in the first quarter Friday to help lift the Spartans (6-1).

"It feels great," Kiner said of the Spartan's 6-1 start. "It's a great experience for the whole team and the whole Roger Bacon community."

The school plans to have a ceremony to recognize Kiner prior to Friday’s game against CHCA.

Kiner said his football IQ has improved this season and that has made a significant difference. He said he's seen just about everything from a defensive standpoint.

"I think I've gotten way smarter reading defenses, blitzes and everything like that," Kiner said. "The way I run the ball now is way smarter."

The Spartans play host to Cincinnati Hills Christian Academy (6-1) Oct. 18. CHCA is No. 3 in the Division V, Region 20 standings.

"Their good," Blaut said of CHCA. "They've been one of the best teams in the MVC so we have our work cut out for us this week."

Colerain wins 80th consecutive GMC game: Colerain continued its dominant streak in the Greater Miami Conference with a 17-3 win at Hamilton. It was the Cardinals’ 80th consecutive GMC win. Colerain senior safety Deshawn Pace (University of Cincinnati verbal commit) had a season-high 10 tackles to lead the Cardinals’ defense. He also had a 43-yard touchdown run in the fourth quarter.
Colerain (6-1, 5-0 GMC), ranked No. 4 in the Division I, Region 4 computer points standings according to Joe Eitel, play host to Mason (3-4, 3-2 GMC) Oct. 18.

“Our offense only got three possessions in the first half and scored on two of them,” Wyoming coach Aaron Hancock said. “Deer Park did a good job of eating up the clock and keeping the ball away from our offense. We played a dominate second half of football in all three phases of the game.”

Taft continues CMAC win streak: Taft defeated Hughes 26-6 Friday night and won its 25th consecutive Cincinnati Metro Athletic Conference game. The Senators haven't lost in the CMAC since 2014. "It's a great accomplishment," Taft coach Jeff Cargile said. "I think we are getting overlooked in the city as far as successful programs." Taft (6-1) has earned four consecutive postseason appearances. "This program has been on top for a long time," Cargile said.

“Kevin Thibodeaux is an outstanding leader, tremendous student and a talented kicker,” Moeller coach Todd Naumann said. “He is a captain of our football team and is having a great senior season. His decision to attend the United States Naval Academy is exciting for both Kevin and our football program. He represents the very best Moeller High School has to offer, both on and off the field.”

Williams, an Iowa State verbal commit, has rushed for 5,556 career yards, the Winton Woods athletic department confirmed. He did not play in the Warriors’ 55-20 win at Edgewood Friday night. Williams has 725 yards in six games this season for the Warriors (5-2).

There is a minimum of 5,750 career rushing yards in order to appear on the state list.

Wildcats win: Harrison has won five consecutive games in back-to-back seasons. The Wildcats defeated host Little Miami 36-13 Friday night. Harrison (6-1, 4-0 Southwest Ohio Conference) hasn’t lost since Sept. 6 at East Central (10-7 in overtime). Harrison coach Derek Rehage was proud of the offensive and defensive lines Friday night. He said the offensive line has only given up one sack in the past four games and it was a coverage sack. The Wildcats had 484 yards of total offense. Senior quarterback Connor Kinnett was 18 of 23 passing for 307 yards and two touchdowns. Junior running back Cam Hering had 20 carries for 146 yards and two touchdowns. Junior wide receiver Levi Tidwell had seven receptions for 129 yards and two touchdowns. Senior wide receiver CJ Young had six receptions for 106 yards.

Extra points: Ohio State football coach Ryan Day was on the sideline for the first half of the Fairfield at Princeton game Friday night at Jake Sweeney Stadium. The Buckeyes (6-0) next play at Northwestern (1-4) Oct. 18.