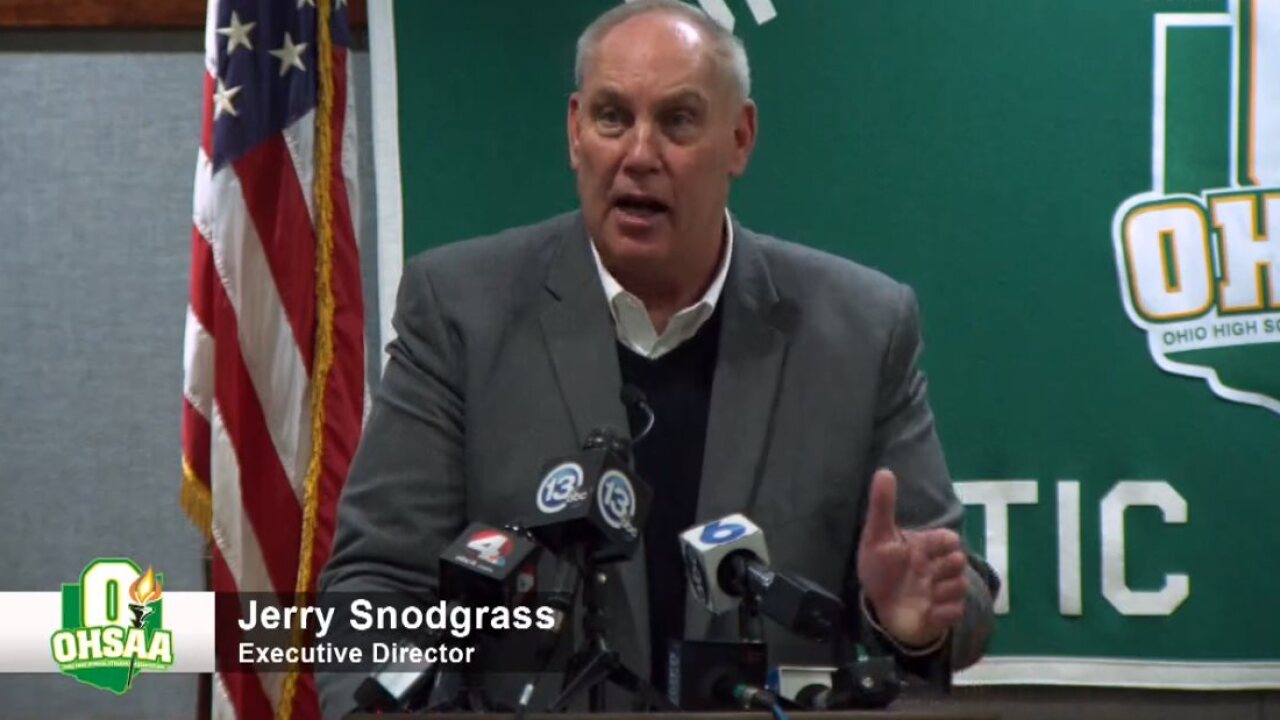 COLUMBUS, Ohio — Ohio High School Athletic Association executive director Jerry Snodgrass said Thursday afternoon a decision about the remaining winter sports tournaments could be made within the next two days.

The state boys basketball, girls basketball, hockey and individual state wrestling tournaments — all of which were scheduled to be held in Columbus this month — have been postponed indefinitely since March 12 due to the coronavirus outbreak.

"We will be making that decision for winter sports probably within the next 24 to 48 hours," Snodgrass said during a press conference at the OHSAA office in Columbus. "We have to. I think it's imperative that we have to and cannot procrastinate. I do not want to lead people on. That's the No. 1 thing I don't want to do and give them false hope."

The press conference, which was streamed live by the OHSAA, had close to 92,000 shares before 2 p.m. Thursday.

"Jerry sent every school an email with the 'CliffsNotes' of what he was going to say today last evening," said Wyoming athletic director Jan Wilking, who is vice president of the OHSAA Board of Directors.

"Honestly, we are all in a holding pattern based on the governor’s statements he makes everyday at 2 p.m. It is crazy for all parts of schools right now. The focus and worry, even for ADs, has shifted from sports to how are we going to make sure kids are fed and the mental status of kids whose lives are turned upside down and then dealing with our own personal family situations."

Snodgrass said the OHSAA is still using the same timeline of April 6 for spring sports, provided there are no other changes.

"In terms of spring sports, we all want to explore every way to make those happen if at all possible, even if an abbreviated season," Wilking said.

A mandatory no-contact period is in effect for all school-sponsored sports March 17 to April 5. There is also a mandatory shutdown of facilities used for the purposes of conducting athletics activities in the same timeframe.

Turpin athletic director Tony Hemmelgarn said he has a great deal of respect for Snodgrass and what he's been doing during these difficult days in the state and the country.

"There is no playbook for this," Hemmelgarn said. "Like Jerry Snodgrass, I believe 100 percent in our role in education. My heart breaks for spring programs, in particular senior classes. However, not just for missing ball games, but for missing proms, concerts, pep rallies and friends. Even though we may not quite understand it yet, a lot is being learned right now that will impact all of our lives in the future."