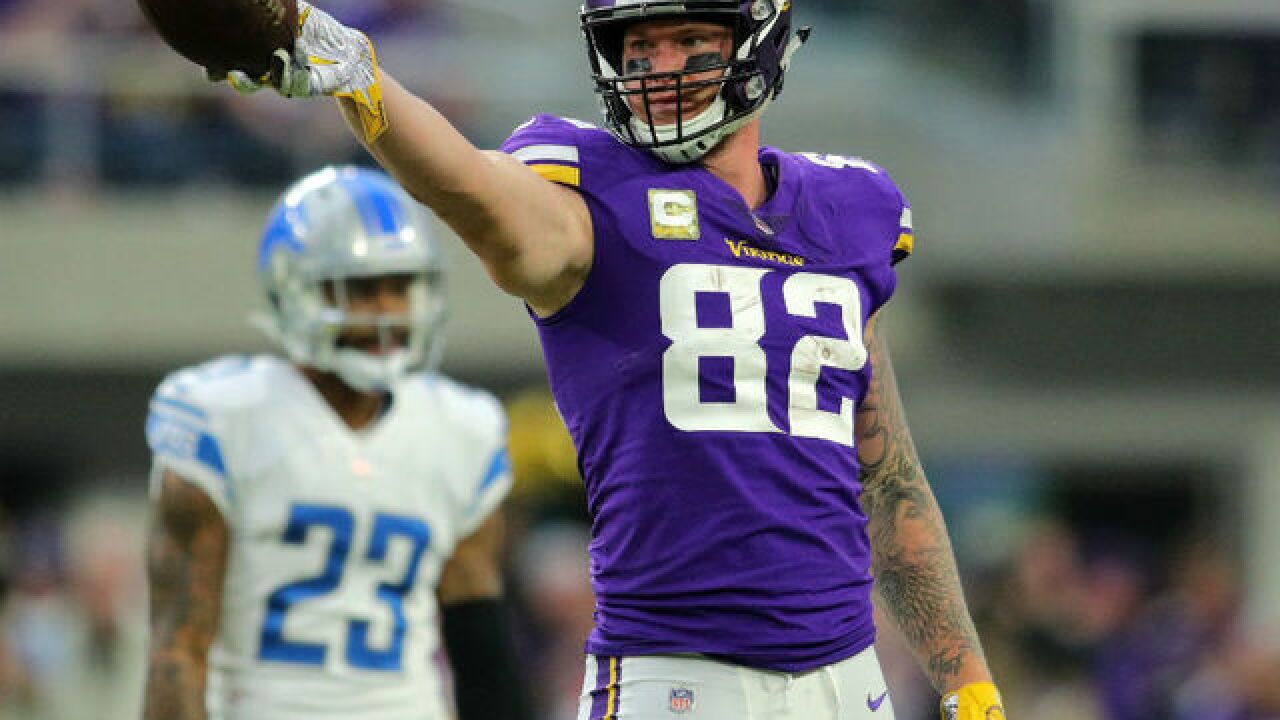 Copyright 2018 Scripps Media, Inc. All rights reserved. This material may not be published, broadcast, rewritten, or redistributed.
<p>Minnesota Vikings tight end Kyle Rudolph is ranked in the top 10 among tight ends in the NFC in four categories, including yard after catch, total yards, receptions for first down and total receptions. Last week, he made his 100th career start and 61st consecutive, the longest active streak among all tight ends. (Photo by Adam Bettcher/Getty Images)</p>

CINCINNATI – His hat is pulled down enough that you can’t see Kyle Rudolph’s eyes, but the tears are certainly there. The letters are that powerful.

As the Minnesota Vikings tight end read correspondence the team received about his community outreach efforts since joining the team in 2011, the 2008 Elder High School graduate couldn't help but be emotional.

Parents, nurses and patients are seen throughout the “Dear Kyle” video that was released on social media by the NFL team Thursday morning. The stories are powerful and honest. Rudolph’s efforts to connect with those in need in Minneapolis and St. Paul have had a profound impact.

You've seen what @KyleRudolph82 can do on the field.

But off the field?

He's touched more lives than you could ever imagine.#WPMOYChallenge Rudolph pic.twitter.com/iTqfY4TIas

On Thursday morning, the former Elder football standout was named the Vikings’ nominee for the Walter Payton NFL Man of the Year Award.

“In addition to having a successful career on the field and rewriting franchise records for tight ends, Kyle brightens the lives of others at dark times,” Vikings owner/president Mark Wilf said in a statement. “It is clear that the gifts of his and (his wife) Jordan’s time, financial resources and vision come directly from their heart, and we have enjoyed seeing them provide respite for people in need.”

The Walter Payton NFL Man of the Year will be announced during NFL Honors, a two-hour primetime awards special to air nationally on Feb. 2, the eve of Super Bowl LIII. NFL Honors will be at Fox Theatre in Atlanta. Rudolph is one of 32 nominees.

I’ve followed Kyle since his days at Elder HS in Cincinnati. What a class act. Making a difference by using his platform for the better. Congratulations Kyle. And thank you for being you and setting such a great example. https://t.co/0Dd2XnC8TZ

“Both Jordan and I are extremely passionate about kids and anything that we can do to help kids be just that,” Kyle Rudolph said in a statement. “They’re not in the circumstances they’re in for a reason. These diseases and cancers that they’re fighting don’t discriminate. They didn’t choose to have their childhood taken away from them…I think the biggest thing that we try to do is provide these kids with an opportunity to be kids.”

The Rudolph family opened Kyle Rudolph’s End Zone at the University of Minnesota Masonic Children’s Hospital in December. Built as a getaway for children and families going through treatments, the 2,500-square-foot space houses an indoor basketball hoop, an area with a TV and video games, a digital sports simulator, a kitchen, a lounge area with table games, a wall for patients with autism spectrum disorder and a quiet space for families.

For patients with conditions that prohibit them from leaving their room, the Rudolphs make personal visits to their rooms, according to the team. The team said Rudolph’s year-round commitment allows him to develop deep and meaningful relationships with patients and their families. Not only has he had the opportunity to make a lasting impact on the lives of the children and their families in the hospital, but the nurses and doctors have also witnessed him connect and go-the-extra-mile for patients in the hospital.

“I’ve known him since he was a little kid and have seen him grow as an athlete,” said Elder High School English teacher and offensive line coach Craig James. “And I’d say the coolest thing is seeing the husband and father he has become.”

Rudolph, who will be the guest speaker at Elder High School’s annual sports stag Feb. 21, has also showed support to those serving in the military. As the NFL’s first ambassador for the United Heroes League, he has hosted families at practice and games, given away Polaris Off-Road Vehicles, and held football camps worldwide to over a hundred military kids.

“When you look at what Elder tries to produce in a young man, it all comes back to being a good person,” James said. “You can be the greatest athlete or whatever you choose in life, but if you aren’t appreciative of those that helped you get there – if you don’t treat people the way that they deserve to be treated – and if you don’t value your relationship with God, what do you have? That is something I’ve heard his coaches, his teachers and everyone in this building say at some point since I was a student here, and now a teacher and a coach. He embodies that. He doesn’t take it for granted. Ever.”

Elder Athletic Director Kevin Espelage said Rudolph’s commitment to the Twin Cities community reflects back upon his Catholic education at Our Lady of the Visitation Parish School, Elder and the University of Notre Dame. He’s always had the motivation to give back to others.

“Almost to a fault, he has trouble saying no,” Espelage said. “He is just a passionate young man and accepts his professional platform and uses it for nothing but positive impact on his community and just overall.”

Rudolph, the 2013 Pro Bowl MVP and 2008 U.S. Army All-American, is ranked in the top 10 among tight ends in the NFC in four categories, including yard after catch, total yards, receptions for first down and total receptions. Last week, he made his 100th career start and 61st consecutive, the longest active streak among all tight ends.

The Vikings (6-5) play at Seattle (7-5) on Monday Night Football on Dec. 10. Espelage said ESPN has contacted the school about photos from Rudolph's days at Elder.

Rudolph has also been instrumental in helping Elder create plans for a new 19,000-square-foot fitness center at the corner of Vincent and Regina avenues in Price Hill. The groundbreaking occurred in mid-October. The goal is to have the Panther Fitness Center open in May.

“He wants to better things for the future,” Espelage said. “…It’s never been about putting his name on this building or anything like that. It’s just about how can I give back to Elder High School in appreciation for what they’ve done for me but also something that is going to better the experience at Elder High School.”