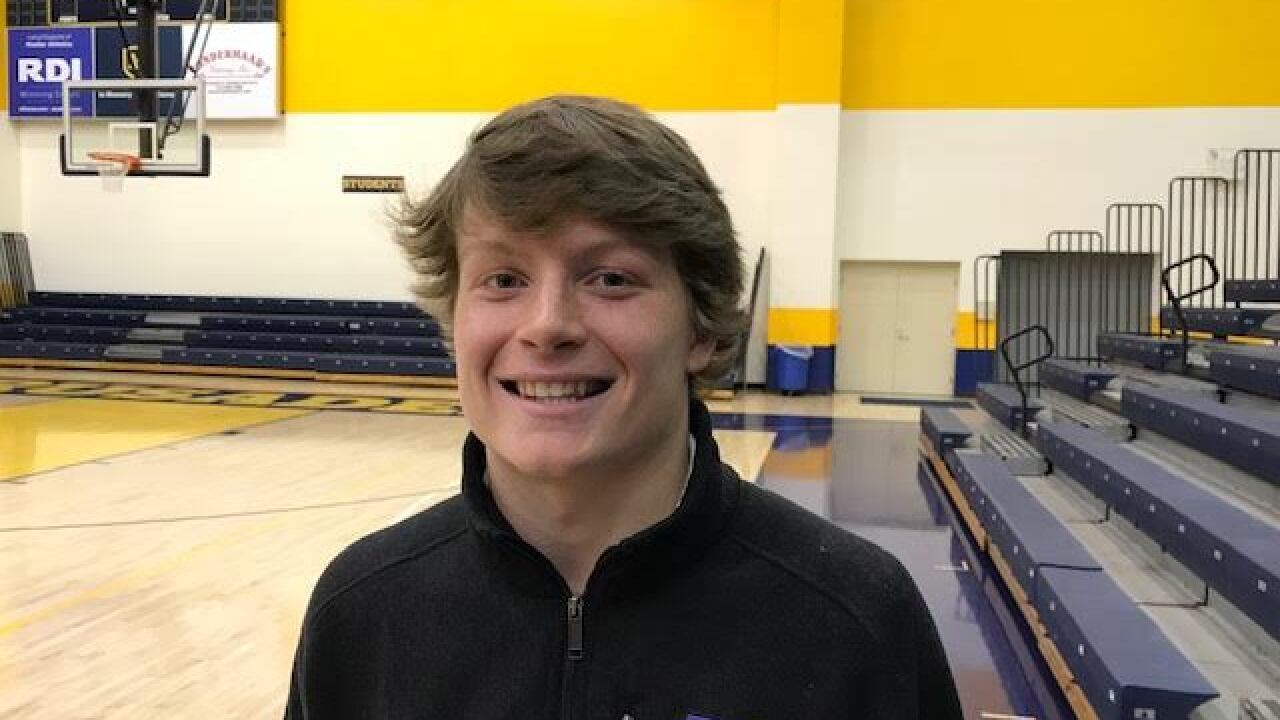 SYCAMORE TOWNSHIP, Ohio — No one was speaking with Andrew Deyhle after the second inning Wednesday afternoon at Schuler Park.

“I was at the end of the dugout and everybody was leaving me alone,” said the Moeller junior right-handed pitcher.

The Crusaders were certainly following baseball's unwritten rule of not speaking to a pitcher with a no-hitter or perfect game.

Those circumstances would all change with a significant celebration after the next 2 1/2 innings of Moeller’s game against visiting Turpin.

“About the third inning – I kind of knew I was dealing and that they weren’t going to touch me,” Deyhle said Thursday morning. “And my fastball was on. I could locate anywhere.”

Before Moeller celebrated its Division I state basketball championship team (29-0) with a recognition ceremony Thursday morning, Athletic Director Mike Asbeck asked Deyhle to stand up in the Brisben Family Education Center to receive a round of applause.

“It’s surreal,” Deyhle said. “I didn’t think it was that big of a deal until everybody sort of blew up my phone. Everybody is texting me today. It’s an unbelievable experience.”

Deyle, a starting defensive back on the Moeller football team, had seven strikeouts and threw just 52 pitches in a game he will never forget.

Deyhle said his off-speed pitches were working well. His slider and curveball were tight to help lead the Crusaders (2-1).

“We were close to a run-rule (10 runs or more), so I didn’t think the (perfect game) was going to count,” Deyhle said. “I went out in the fifth inning thinking I did all this work for nothing and then I got the huge water jug sprayed on me – it was cool.”

Moeller coach Tim Held said the program has had about 25 no-hitters in its storied history but only two perfect games. The first perfect game was thrown by Alex Wimmers in a 2007 game against Vandalia Butler.

Held said Wednesday’s performance on the mound was “unreal” to watch.

“In that fifth inning in our dugout everybody was on the edge,” Held said. “They knew what was going on.”

Moeller’s defense also responded well to help Deyhle (1-1). In the first inning, senior shortstop Ryan Galanie made a back-handed stop and throw to get the out at first. Junior second baseman Travis Graves snagged a line drive, too.

Deyhle was behind in the count 3-1 in the top of the fifth when junior David Hornback made a sliding catch in foul territory in left field for the first out. Deyhle then closed the door on the next two batters and entered the Moeller history book.

“Just to see him and his reaction and his teammates’ reaction and the parents and the fans that were still there realizing what happened – it was so cool,” Held said.