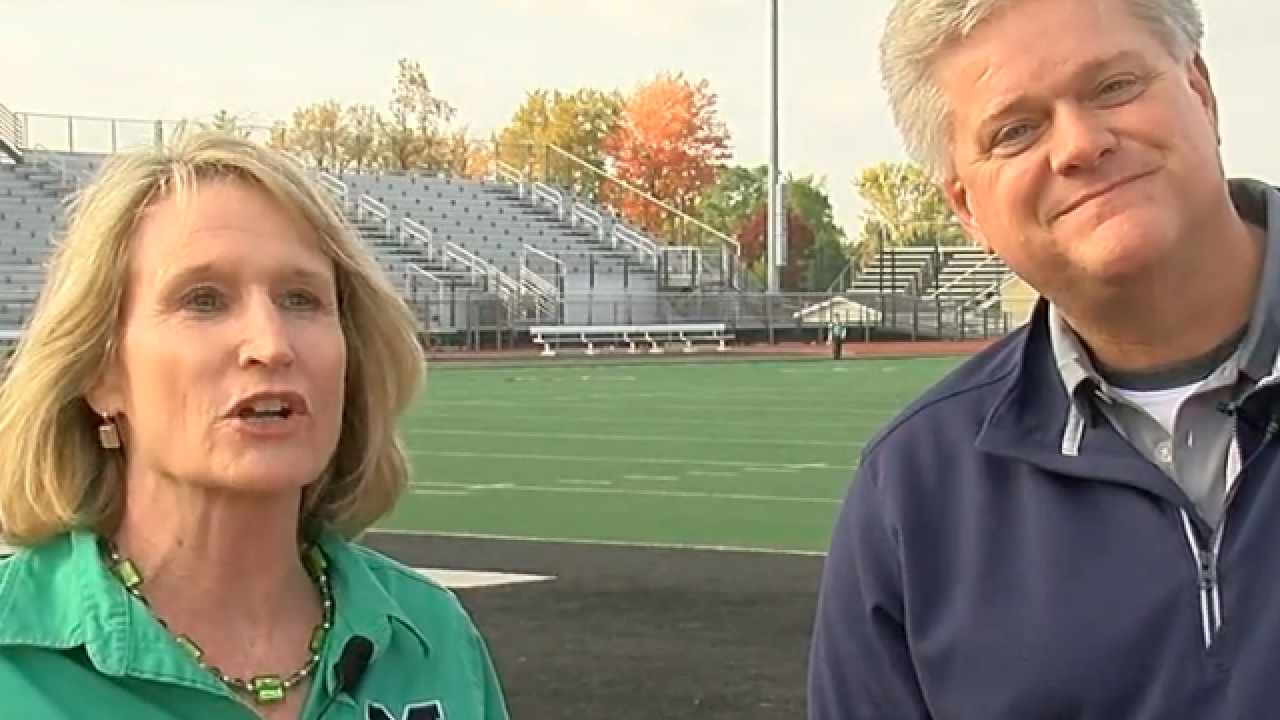 Copyright 2017 Scripps Media, Inc. All rights reserved. This material may not be published, broadcast, rewritten, or redistributed.
<p>Gail Kist-Kline and Keith Kline are husband-and-wife school superintendents who found themselves rooting for opposite teams in the Ohio high school football playoffs Friday night.</p>

MASON, Ohio – Keith Kline and Gail Kist-Kline are husband and wife but they were rooting for opposing teams Friday night.

The two are school superintendents – Keith at West Clermont and Gail at Mason – and they found their high schools playing each other in the first round of the Ohio football playoffs.

“It’s added a real interesting twist to this game,” Keith said as they waited at Mason for the kickoff.

The Klines decided to take the competition up a few notches by turning it into a fundraiser for charities - and by placing their own husband-and-wife wagers.

Both said it was a thrill to have their teams make the playoffs.

“We are always appreciative of how hard our athletes work and our coaches and so to see that rewarded by getting to a playoff is really just wonderful,” said Gail.

West Clermont just opened this year after it was formed out of a merger of two Clermont County schools.

“Glen Este and Amelia came together at the start of the school year to form West Clermont High School so you can imagine our kids having gone 7-3 and won part of the league championship and be part of the playoff. The building is just electric,” said Keith.

The biggest winners may be two local charities.

“We felt like a great opportunity to bring two absolutely outstanding communities together and do something good for folks in need,” Keith said.

West Clermont picked Toys for Tots and Mason picked Matthew 25 Ministries. The goal was to fill a bus with toys and non-perishable food items.

And after the game, the rivalry was going home with the Klines.   .

“The loser should make the winner dinner for a week,” said Keith, “and if she wins the game, she is going to be a loser at home because I don’t cook.”

But that’s not all.

“I am going to add a little extra wager to that,” said Gail. “We have a dog that likes to get up in the middle of the night, so I am going to say the winner doesn’t have to get up with the dog for a month.”

Mason went on to best West Clermont 26-0. Looks like Keith needs to learn how to cook.