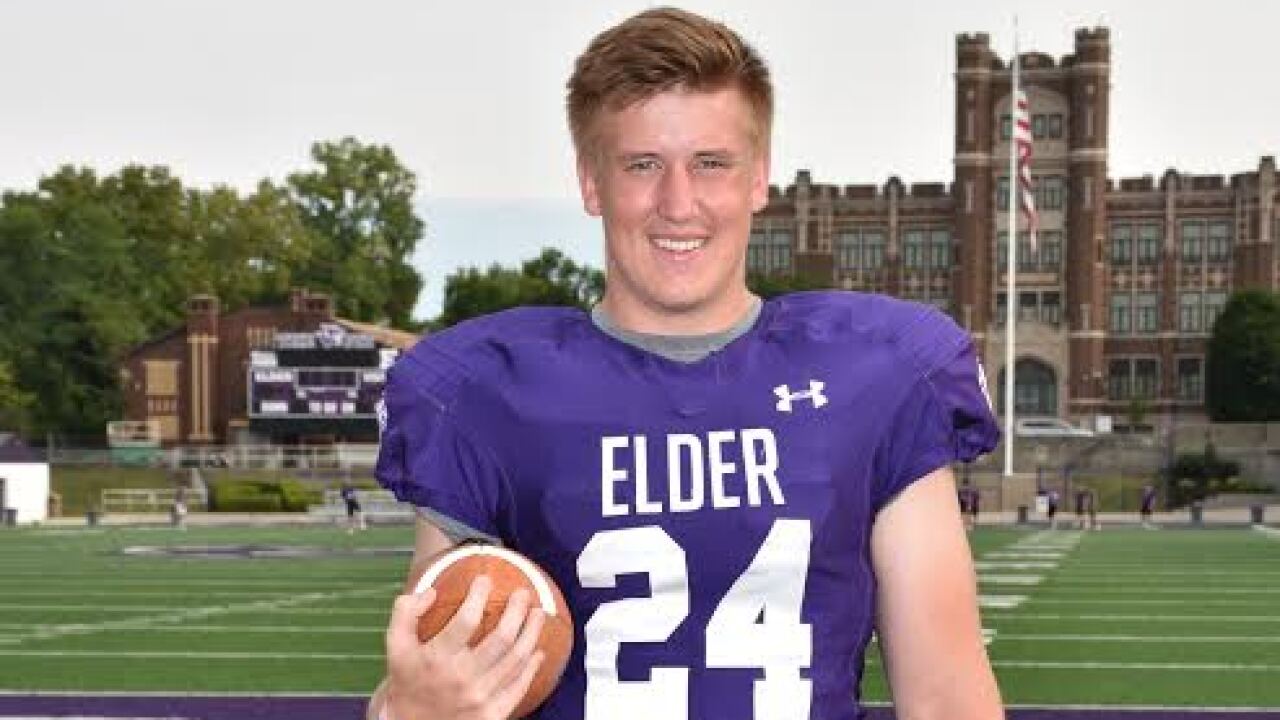 Kevin Welch/ehsports
Elder senior defensive end/linebacker Connor Keyes has 41 tackles and a forced fumble for the Panthers (4-1) this season.

CINCINNATI — When Elder senior defensive end Connor Keyes was politely asked to hand over the milk at dinner Tuesday night, he declined.

After all, it’s X week. His eldest brother, Andy, a 2010 St. Xavier graduate, would just have to understand at the Green Township family home.

There is plenty at stake –- bragging rights, the GCL South standings and the Division I, Region 4 playoff picture. St. X is No. 1 in the computer points standings while Elder, which leads the all-time series 51-42-6, is No. 3.

This week is also unique for the Keyes family. While Steve and Connor bleed purple, Connor's two brothers, Andy, 27, and 20-year-old Daniel, a former St. Xavier quarterback and 2017 graduate, are part of The Long Blue Line.

“Sometimes I tell them they can sit on the other side and wear their blue,” Connor joked.

All kidding aside, Connor, 18, is grateful for the opportunity to play football this season for the Panthers. He suffered a ruptured appendix in mid-June in Minnesota while visiting his cousin, Vikings tight end and former Elder standout Kyle Rudolph.

Connor, who is 6 feet 3 and 220 pounds, spent 15 days in a Minnesota hospital and lost 30 pounds. He wasn’t able to participate in full contact until the second scrimmage in August.

Throughout the adversity, Connor said he remained upbeat and leaned on his family and friends for guidance. His mother, Debbie, stayed with him for the two weeks in Minnesota.

Elder coach Doug Ramsey told him he wouldn’t lose his position. Elder defensive coordinator Brett Currin reassured Connor he was a smart and talented football player who wasn’t behind on technique.

“Our goal at the end of the year is obviously to win a state championship, and I am not going to get where I want to get just being all down and feeling all bad for myself,” Connor said. “Staying positive and having people around Elder texting me and being there for me was awesome.”

Several of his Elder teammates greeted him at Cincinnati/Northern Kentucky International Airport on July 3 as he returned home.

“I really think it was the support from his teammates and family and friends that really kept him motivated and kept him positive,” Steve Keyes said. “That was his biggest worry – he was down to about 185 pounds and the season was about to start in another month or so.”

He ate up to six times a day to regain the weight – everything from peanut butter and jelly sandwiches to protein shakes to Chipotle. It was a slow process but eventually his strength returned in the weight room.

“Connor has always worked hard, so I knew the rehab process and gaining the weight and strength back that he lost wouldn’t be an issue,” Rudolph told WCPO. “He just had to be patient. It was awesome to see him back on the field because that’s what he loves to do.”

Connor has returned to form this season. He is the leading tackler in the GCL South (41 tackles) and has adjusted well within the past week from changing to defensive end from the linebacker position.

He has scholarship offers from Virginia Military Institute (VMI), Ohio Dominican, Tiffin and Urbana, along with interest from Minnesota and Mid-American Conference programs.

“He is a guy that is just high motor,” Currin said. “Whether he’s a linebacker or defensive lineman – he’s going to give you everything he’s got on every play.”

That’s no surprise given how much Elder football represents to Connor. His name is etched into the Elder legacy at the school’s new Panther Fitness Center, which opened in late June. The center is dedicated in memory of his grandfather, John H. Rudy Rudolph Jr. (Class of 1953).

His all-in approach is significant to the Panthers. His teammates gravitate toward his attitude.

“It’s a big part of him,” Ramsey said. “I think he has such a good relationship with Kyle and him playing here. He kind of lives and dies for it (Elder football). It’s like a lot of our kids – it’s really important to them and the opportunity to represent playing here is something really special for him.”

Kyle Rudolph said Connor’s best football is ahead of him.

“I’m not surprised he is leading the GCL in tackles,” Rudolph said. “He has the mentality and motor of not being denied.”