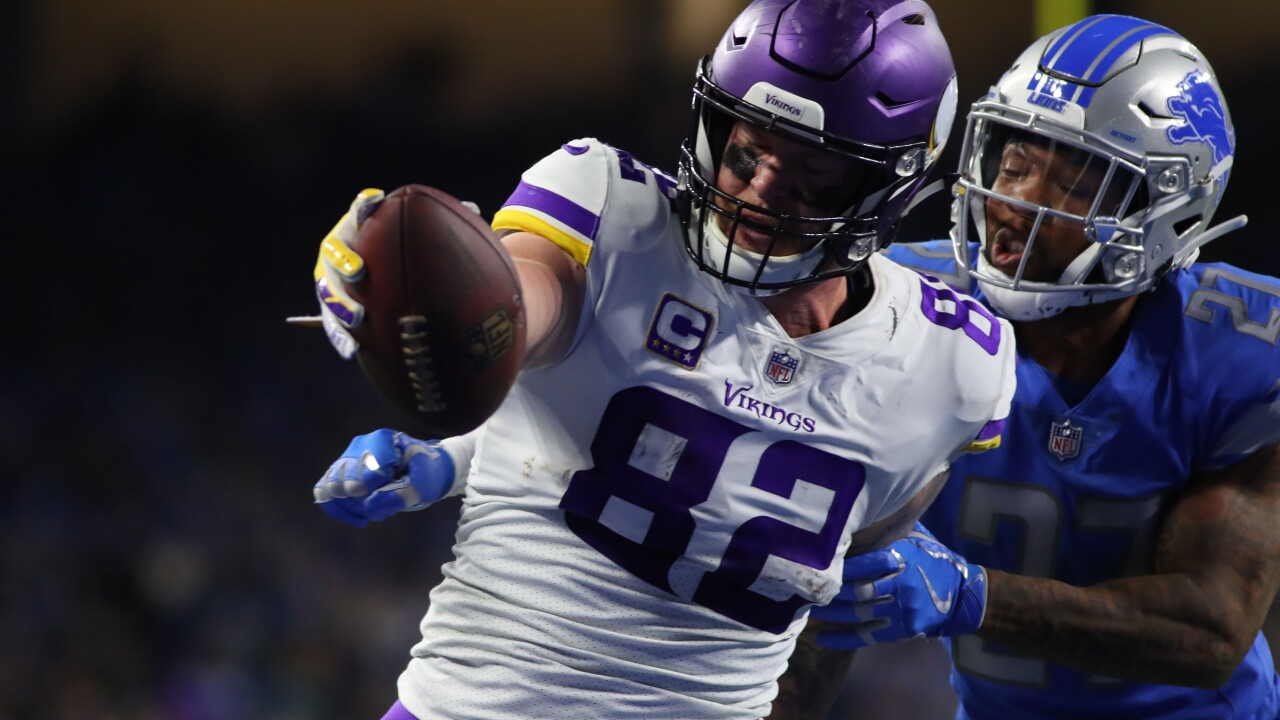 CINCINNATI — Everywhere you turned Thursday night, there were stories about Kyle Rudolph.

The Minnesota Vikings tight end returned to Elder High School Thursday night for the 43rd annual sports stag. An estimated 1,180 attended the sold-out event, including an overflow crowd in the wrestling gymnasium, and everyone wanted to see "Rudy."

"A five-star guy with a five-star heart," is how Elder coach Doug Ramsey described his former standout.

Rudolph, a 2008 Elder graduate, stopped to take photos, chatted with friends and caught up with the Elder High School community.

He spoke on a variety of topics. There were light-hearted moments, including some inside stories about being at the Pro Bowl.

There were was emotional times discussing his family and eloquently described his Elder experience and the support he received. He also emphasized the importance of giving back to a community like he has in the Twin Cities.

"For us (Kyle and his wife, Jordan), it's just about 'much is given, much is expected,'" Rudolph said. "We try to give of ourselves as much as we can."

Earlier in the afternoon, he chatted with the Elder students, enjoying every moment and completing interviews with a smile. He also gave out his phone number to some of the football players, saying he would be there if they needed advice.

"I think for a lot of our guys — they were in awe," Ramsey said. "It was really special."

Rudolph, 29, became the first Elder graduate to be the stag speaker. Underneath the sports stag banner was a smaller one that welcome him home in purple, the color of both the Vikings and the Panthers.

He told the large audience he appreciates the fact that Elder prepared him not only athletically but academically. The ability to look a team official or chief executive officer in the eye during a meeting is poise he learned from his Elder and West Side upbringing.

Beyond the football field, Rudolph’s impact in the Twin Cities is well-documented. He was nominated for the 2018 Walter Payton NFL Man of the Year Award, and Kyle and his wife opened Kyle Rudolph’s End Zone at the University of Minnesota Masonic Children’s Hospital in December.

Built as a getaway for children and families going through treatments, the 2,500-square-foot space houses an indoor basketball hoop, an area with a TV and video games, a digital sports simulator, a kitchen, a lounge area with table games, a wall for patients with autism spectrum disorder and a quiet space for families.

For patients with conditions that prohibit them from leaving their room, the Rudolphs make personal in-room visits. Rudolph’s year-round commitment allows him to develop deep and meaningful relationships with patients and their families.

"I tell people all the time, 'I can talk forever about what Kyle has accomplished and what he will accomplish athletically,'" Ramsey said. "'But, I think it's the other things that make him special.'"

Rudolph has also been instrumental in helping Elder create plans for a new 19,000-square-foot fitness center at the corner of Vincent and Regina avenues in Price Hill. The project is expected to be completed in May.

“He wants to better things for the future,” Elder athletic director Kevin Espelage said earlier this school year. “…It’s never been about putting his name on this building or anything like that. It’s just about, 'How can I give back to Elder High School in appreciation for what they’ve done for me but also something that is going to better the experience at Elder High School?'”

Rudolph was a driven competitor but also a teammate and player who could be counted upon. That hasn't changed.

“I always thought how difficult it must be to be ‘Rudy’ and to be in the public eye with everyone watching his every move,” Elder basketball coach Joe Schoenfeld said. “Then I realized it is probably not as hard as I thought because Kyle is just a genuinely nice person. He is authentic — being ‘Rudy’ is not an act.”