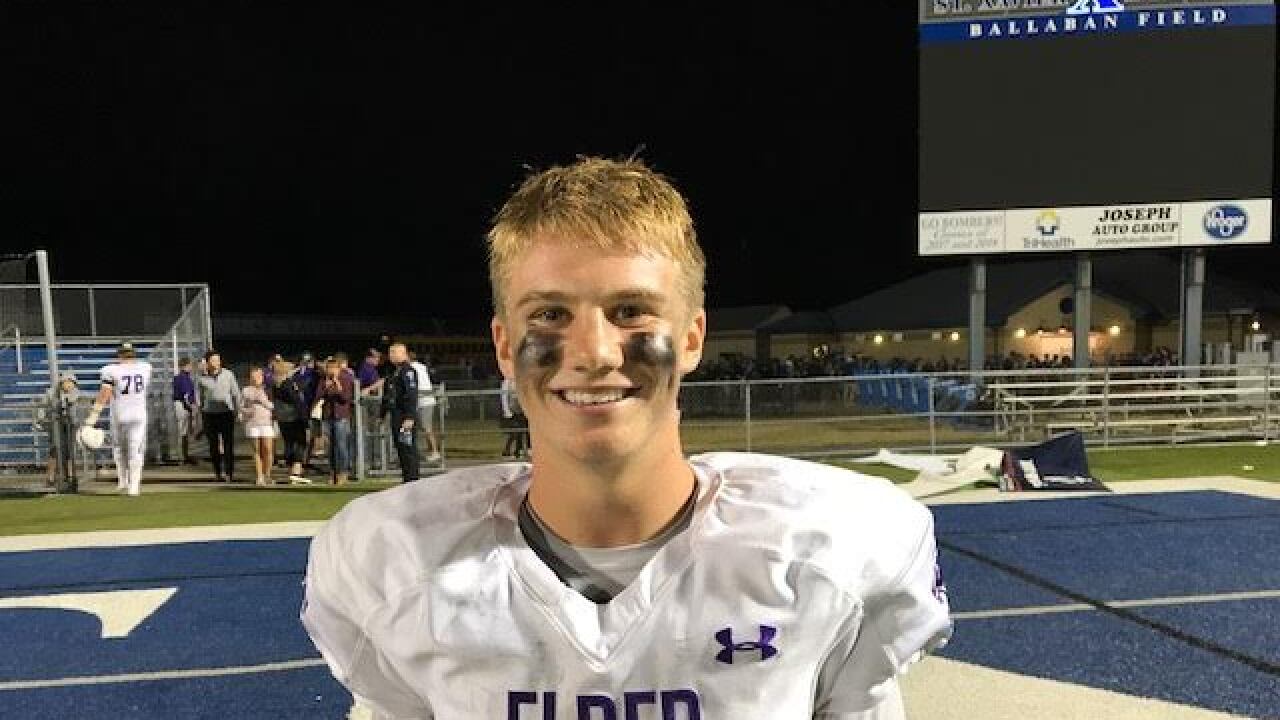 The Elder senior quarterback rushed for 236 yards as the Panthers defeated St. Xavier 31-28 in front of a sold-out Ballaban Field in the 100th meeting between the two programs.

“Matthew is a really good player and you see that by the two long runs he had,” Elder coach Doug Ramsey said. “It was important for us tonight.”

Elder lead the all-time series with St. X 52-42-6. Friday's game was billed as one of the nation's top 10 matchups to watch, according to MaxPreps.

Luebbe has thrown for 1,080 yards and 11 touchdowns and has rushed for 649 yards and eight touchdowns this season. Luebbe was quick to credit his offensive line for the run protection Friday night.

Elder, which had 376 yards of total offense, is No. 3 in the unofficial Division I, Region 4 computer points standings, according to Joe Eitel. The Panthers host Moeller (1-5, 0-2 GCL South) Oct. 11.

“Coming into a GCL game you know it’s going to be a battle,” Luebe said. “It wasn’t always pretty throughout the whole game but we ended out on top. It’s just a huge win for us. It’s going to be big coming into Moeller next week.”

St. Xavier (5-1, 1-1), rated No. 2 in Region 4 according to Joe Eitel, made things interesting down the stretch. The Bombers never led Friday night but persevered through a 17-7 halftime deficit.

With 2:51 left in the game, senior quarterback Matthew Rueve found senior tight end Marshall for a 3-yard touchdown pass connection to help close the gap to 24-21.

Elder responded when sophomore Drew Ramsey (seven carries for 62 yards) took a direct snap and went 45 yards for a touchdown to make it 31-21 with 1:46 left.

The Bombers scored again with six seconds remaining to make it 31-28 but the Panthers were able to run out the clock.

Senior safety Colton Sandhas and senior defensive back Ben Deters had nine tackles for the Panthers. Deters also had an interception. Sophomore Nick Paff had seven tackles and senior Connor Keyes had four tackles including a sack.

“Our defense was great all night and then the last couple of drives they went down and scored and got those touchdowns,” Doug Ramsey said. “I thought that was really key for us tonight is how well our defense played.”

Rueve had 328 yards passing and three touchdowns for the Bombers. Senior Kellen Newman had 98 yards rushing. Lang had 11 receptions for 126 yards.

“The kids didn’t quit,” St. X coach Steve Specht said. “They played hard. They got started late offensively. You can’t do that in a GCL game. Elder is too good. I’ve got to do a better job coaching. That’s the bottom line.”