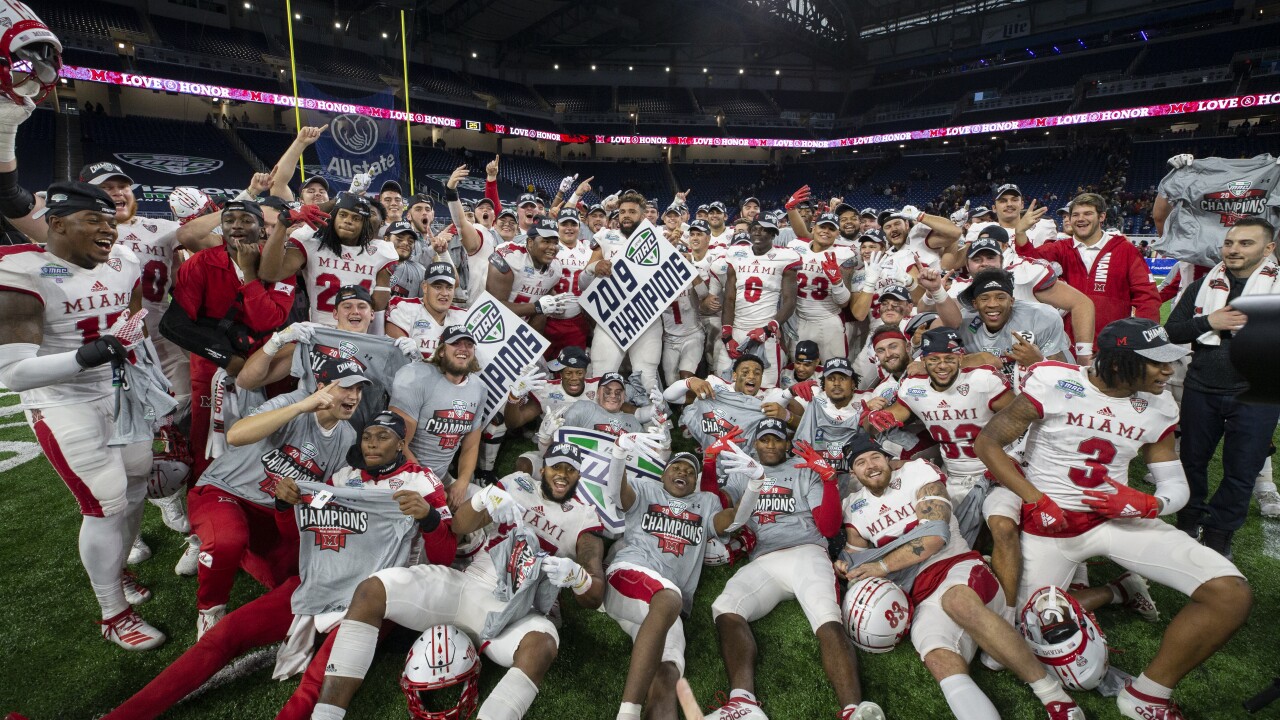 OXFORD, Ohio — There have been times when Miami University freshman linebacker/defensive end Ivan Pace Jr. returns to the sideline only to realize he isn’t able to play offense.

Pace, former Colerain High School standout, was used to being a running back and linebacker with the Division I state runner-up Cardinals in 2018.

But his role is well defined on defense for the RedHawks this season. Still, it doesn’t hurt to ask.

“To run the ball again would be amazing,” Pace said with a smile. “I asked the (coaches) a couple of times. They just said, ‘Worry about your position. We will get you over there one day.’”

Pace, 19, is one of multiple true freshmen making a significant impact in their first season.

“Of all the teams that won the 10 conference championships, I doubt anyone had true freshmen make such an impact like these kids did,” Miami University coach Chuck Martin said.

“It’s kind of got me scratching my head. I knew they were good – don’t get me wrong. I had expectations that Ivan was going to really help me win championships here. I just didn’t think it was going to be his first year.”

“Crazy excited,” said Miami freshman right guard Rusty Feth, a 2019 Colerain graduate who has played in 10 games for the RedHawks.

“I can’t wait for the experience. The week leading up to it is going to be awesome. Preparation – I love practice and I love film. I love everything about it. So the fact that we get a couple more weeks to have fun – it’s really nice.”

Miami won the Mid-American Conference title with a 26-21 victory over Central Michigan Dec. 7 at Ford Field in Detroit.

“It was an amazing experience,” Pace said. “I’ve never played in an NFL stadium before. I really liked it. The first play I got in I got a sack – that was nice.”

As Martin stood on the Ford Field sideline, he realized the significance that area high school products made from the 2019 class.

“I am looking out there like, ‘Two stinking freshmen from our own backyard,’” Martin said. “What an impact that these kids have made on the success of a conference championship team.”

Phelps has 17 tackles including 4.5 sacks.

Pace, the Division I state defensive player of the year in 2018 while at Colerain, tied an NCAA single-game record with six sacks in a win over visiting Akron in late November.

“Every third down through our conference season was Ivan and two freshmen – one from Mount Healthy and one from Colerain,” Martin said. “The two closest schools I can get to other than Talawanda. Lonnie has had an incredible year – is up in the league leader in sacks.”

“A lot of times a true freshman on special teams is probably your most impactful freshman,” Martin said. “Because Ivan started and Rusty started, it kind of put Luke on the back burner. We couldn’t have done what we did without everybody.”

Martin speaks in a caffeinated style that is synonymous with his personality. He said the strength of area high school programs have made it a smooth transition for many of the players. The freshmen aren't the only reason Miami is in a bowl game, but the RedHawks aren't playing in January without them.

“Rusty Feth played guard as a true freshman on a Division I team that won their league title,” Martin said. “Like that’s almost impossible. And he played it at a really high level. He didn’t get the job in camp. We had injuries, which forced him in. We weren’t even preparing him for this role.”

The RedHawks benefited from the likes of other young players like quarterback Brett Gabbert – the MAC freshman of the year – who has thrown for 2,163 yards and 11 touchdowns.

Feth, 18, said he and the other freshmen from the Cincinnati area quickly found a connection with their teammates and discovered a home in Yager Stadium. They believe this season is just the start.

“Cincinnati football is really strong, especially with three players from my team (Colerain),” Pace said. “That’s really amazing. And just knowing that we come up and make a bigger brotherhood and make ourselves stronger. I wouldn’t want to be anywhere else.”