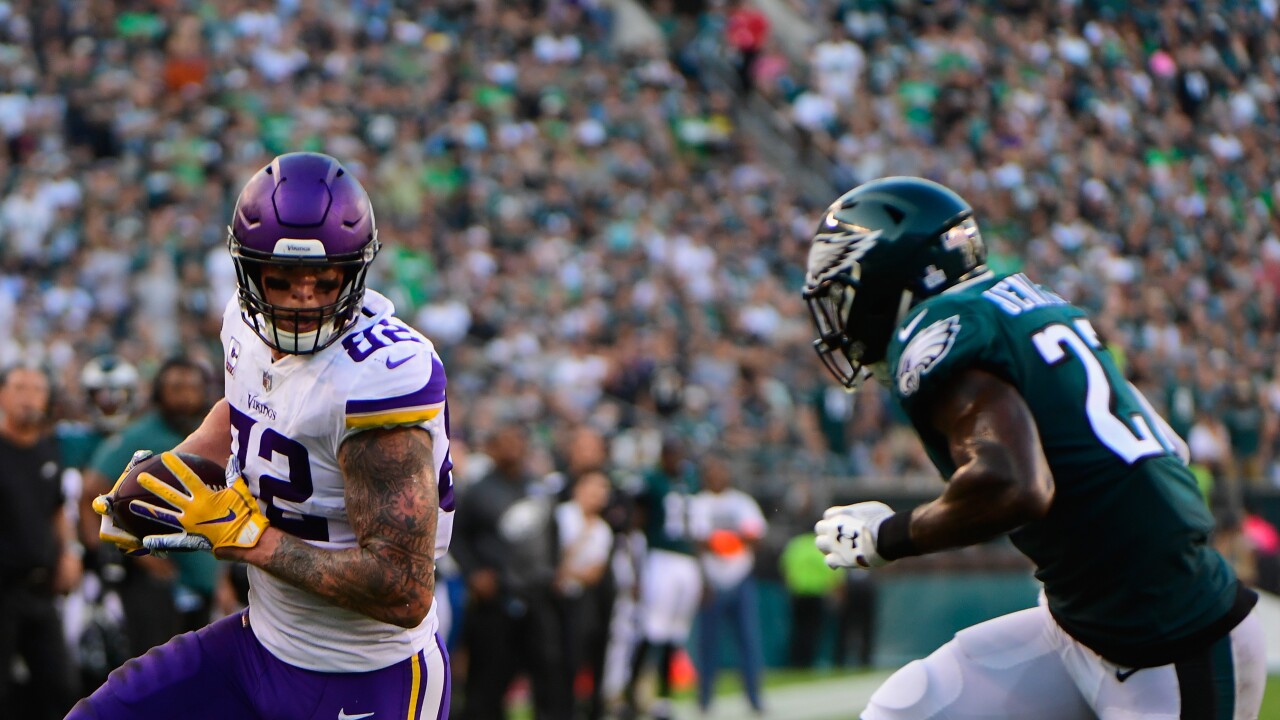 CINCINNATI — The Buddy LaRosa High School Hall of Fame has elected five individuals and two teams to its 2018 class.

The hall of fame is in its 44th year and has honored 274 individuals since 1975. The latest additions to the LaRosa’s High School Sports Hall of Fame will be officially inducted into the hall in ceremonies in June 2019.
RELATED: Join the Cincinnati area high school sports Facebook group

No high school in Cincinnati football history has won more games (703) than the Wyoming Cowboys, but it was the 1962 team that perhaps shines brightest in the Cowboys’ storied heritage.

Led by legendary Wyoming football coach Bob Lewis, who is an inductee in the LaRosa’s High School Hall of Fame, the ’62 Cowboys went 10-0, going not only undefeated but also unscored upon. The Cowboys racked up a city-leading 446 points while give up zero points. In fact, only four times that season did opponents manage to get inside the Cowboys’ 25-yard line. And that included Woodward, a then-powerhouse team who featured eventual University of Cincinnati and Cincinnati Bengals star Clem Turner, who the Cowboys held to 28 yards rushing.

Powered by an enormous offensive line for its time, the Cowboys featured tackles Mendel Gentry and Barry Williams, center Jim Pease, and guards Robin Steffens and Charlie Ramsey. Also leading the Cowboys’ offense were senior quarterback Bing Guckenberger, senior running back Hal Reames, senior fullback Jim Commins, and juniors Bob Goodridge and Ted Yeager. All of them also played on the Cowboys’ tenacious defensive side of the ball. Gentry and Steffens were All-Ohio honorees, and Goodridge is an inductee into the LaRosa’s Hall of Fame.

Led by then-rookie head coach Rose Bauer, who is an inductee into the LaRosa’s Hall of Fame, the Mercy Bobcats notched a dominating, undefeated 27-0 season topped off with a Class AAA Ohio state championship. That title would launch what would become an avalanche of volleyball state championships from Southwest Ohio and the Girls Greater Cincinnati League in particular. Cincinnati teams have won 27 of the 48 big school state titles – 26 coming from the GGCL.

Bauer’s team was led by senior captain Terri Nichting, 1998 LaRosa’s Hall of Famer Sue Bachman and seniors Ceal Franz and Amy Klopp. Blazing through the regular season and tournament undefeated, the Bobcats sealed their spot in history with a 15-8, 8-15, 15-11 victory over Whitehall-Yearling to bring home the Ohio state title. The Bobcats were rarely challenged in 1977, going to three games only six times all year, including the state finals.

A true star multi-sport talent at St. Ursula Academy, Chrissy Donovan earned 11 varsity letters
and was named first team all-city in volleyball, basketball and softball during her stellar prep career. Her outstanding level of play earned her recognition as the LaRosa’s Female Athlete of the Year in 1998-99.

She was an outside hitter and defensive specialist in volleyball during the Bulldogs’ run of six straight state championships. She was even more dominant in basketball and softball, where she earned four varsity letters in each sport.

She excelled in softball as well, combining hitting (.533, 45 RBI as a junior) with speed (city-leading 39 stolen bases). She finished her career with eight school single-season and career records, including 119 RBI and a career batting average of .508.

Her overall athleticism was recognized by the Greater Cincinnati Women’s Sports Foundation where she was named High School Sportswoman of the Year. She went on to play basketball on scholarship at the University of Dayton, where she scored 894 points in her career and was named the team’s MVP in 2001-02 (junior season). She ranks in the Top 10 all time in three-point field goals made (136-of-392), in three-point goals attempted and all-time three-point field goal accuracy. As a senior, Donovan was given the Ann E. Meyers Award of Excellence for Athletics and Academics in Women’s basketball and volleyball.

Chrissy Donovan Waleskowski lives in Cincinnati with her husband, Keith, and children Donovan, Lola and Lucy. She is working as a substitute teacher and coaches the Guardian Angels elementary basketball team with LaRosa’s Hall of Famer Beth Osterday.

She added Class A cross country state titles to her list of achievements with three straight championships from 1987-89. Her time in the 1989 state championship was the fastest in the state in any class. The Kentucky girls’ cross country team went on to capture the National AAU Championship in 1998.

She lives in Louisville with her husband, Michael Kuntz, where she is a Nurse Manager/Systems Support and Programs for Anthem. They have three children – Cullen (who ran for Bellarmine University), Jacob (who ran for Wittenberg) and Emma, who ran in the NCAA Cross Country championship this past fall for Furman.

The finest tennis player to come out of Greater Cincinnati in more than 25 years, Audra Falk dominated her sport both in high school and college. She is the first athlete in CHCA history to win a state championship. In fact, she won the state tennis tournament three straight years and is one of only seven women to win the Ohio state tournament at least three times. Combined with winning three state team titles, Falk wound up with six state titles all together.

She attended Vanderbilt University where she was All-Southeastern Conference four years and a two-time All-American. She reached the 2004 NCAA quarterfinals in singles.

She achieved a No. 5 singles’ ranking in college women's tennis and helped lead Vanderbilt to a Final Four appearance and a team ranking of No. 2. She was asked by the USTA to participate on the USA College Team (awarded to top 5 U.S. women's collegiate players in the country) to compete on the pro circuit with an opportunity to win a wild card into the 2004 U.S. Open Qualifier, achieving WTA pro rankings in both singles and doubles.

Audra Falk Billmeyer and her husband Peter (an Academic All-American soccer goalkeeper at Oregon State who later played for Dallas FC), currently reside in Winnetka, Illinois with their three sons – Hunter, Bennett and Liam. She works as Chief of Staff at Novum Pharma in Chicago.

One of Cincinnati’s most decorated football players, Colerain’s Jefferson Kelley was regarded as the nation’s No. 1 offensive lineman – selected in 1996 by SuperPrep magazine. He was named to five different high school All-America teams, including the prestigious Parade Magazine team and the USA Today team.

During his career, he was credited with 400 career knockdowns as a guard. He was a key member of the 1995 undefeated team that went 13-0 and later forfeited its wins before the state final. His off-the-field accomplishments were also quite impressive – he was selected as an Olympic Torch Escort Runner, carried a 3.7 GPA, was a member of the National Honor Society, was named a National Football Foundation Scholar-Athlete and was picked for the Ohio High School Athletic Association Scholar-Athlete award.

He went on to letter two seasons at The Ohio State University. He graduated with a 3.8 grade-point average.

Kelley and his wife, Christy, have four children – Elizabeth, Jackson, Reagan and Parker -- and still live within walking distance of Colerain High School. He is a Systems Analyst with ProSource Technologies.

Kyle Rudolph was a dominating athlete in football and basketball during his remarkable high school career. He earned seven varsity letters for the Panthers - three in football, four in basketball.

In football, he was named to four different high school All-America teams, went on to enjoy a stellar career as tight end at the University of Notre Dame, was selected as the 43rd pick in the NFL Draft where he has become a two-time Pro Bowl selection with the Minnesota Vikings.

Rudolph was named Maxwell Award winner as the nation’s No. 1 high school tight end and was named first team All-America by USA Today, Gatorade, Rise Magazine and was named a U.S. Army All-American. In his career at Elder he had 37 receptions for 623 yards, 11 touchdowns and even had a 37-yard punt average.

As a high school basketball star, the physical Rudolph owned the inside for Elder. He was only the second player in Greater Cincinnati League history to be named basketball player of the year three times. He set the Panthers’ school record in rebounding and ranks No. 2 all-time in scoring.

Following high school, he played three seasons at Notre Dame where he started 28 games with 90 pass receptions, 1,032 yards and 8 TDs. He then became the second highest drafted tight end in Minnesota history. He entered the 2018 season with a franchise record 37 touchdowns by a tight end and ranked fifth all-time in Vikings history. He was selected to the NFL Pro Bowl in 2013 and was named game MVP. He was selected for the Pro Bowl again in 2017.

Rudolph and his wife, Jordan, have twin daughters, Andersyn and Finley.

One of the finest girls’ cross country and track coaches in Northern Kentucky history, Dave Schuh has led his teams to eight Class A state championships during his 38-year career at Bishop Brossart High School. His teams have also recorded six Kentucky Indoor track state championships for a total of 14 state titles in his career.

His overall coaching accomplishments are remarkable in their scope. His 1997 track team captured the Class A state title earning the Mustangs’ their first-ever girls’ state title in any sport. It was just the start of something special as Schuh’s track team ran off five more state titles.

The six straight team titles tied the most consecutive wins by any school in Kentucky state history. Those teams included stars Stephanie Dierig and future LaRosa’s Athlete of the Year and Kentucky Miss Basketball – Katie Schwegmann.

Overall, Brossart’s girls’ track team has placed in the top three in the state 14 times. They have won 11 regional championships, 15 Northern Kentucky Athletic Conference titles – including nine straight – and have won 172 major invitationals.

In cross country, the Lady Mustangs captured back-to-back state titles in 2017 and 2018. They have placed in the top three in the state meet 15 times and have won 50 major invitational meets during Schuh’s career.