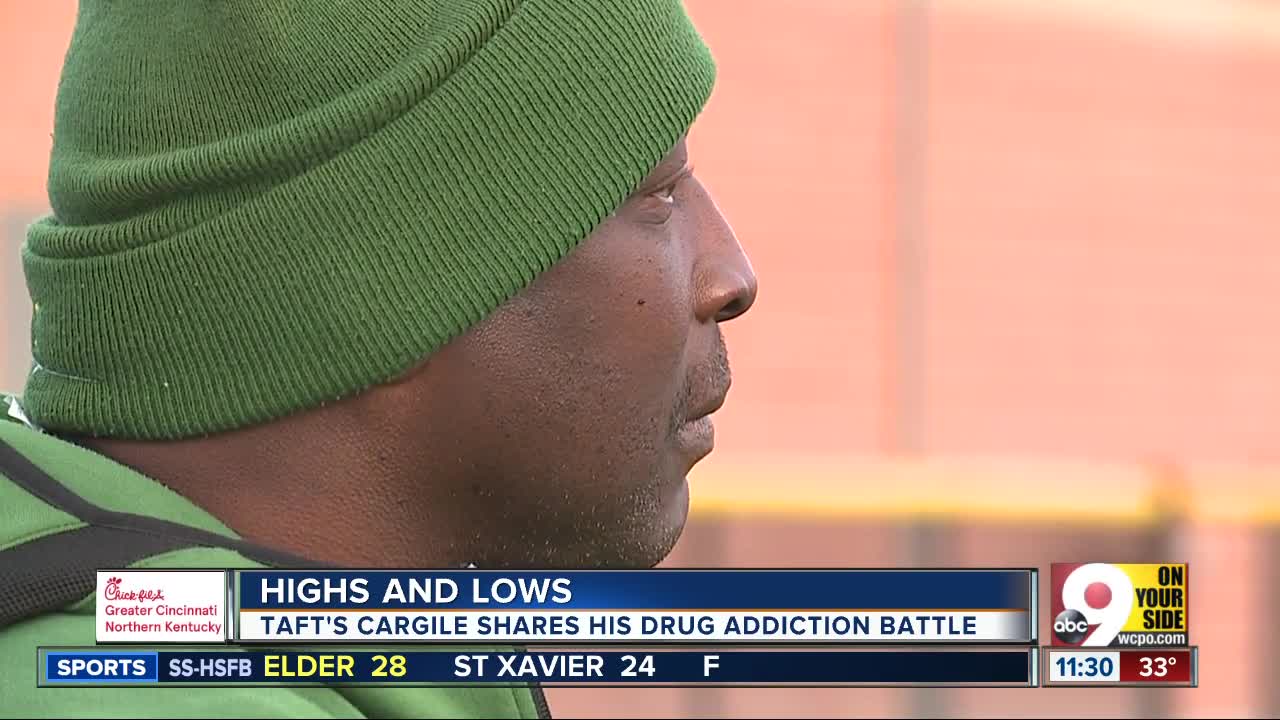 Jeff Cargile is the coach of the 10-1 Taft Senators. He's also a recovering drug user. He sat down with Keenan Singleton to share his personal journey: Addiction, disappointment, what pulled him out and what's kept him sober for 13 years.

CINCINNATI — Jeff Cargile walks with the familiar limp of a former football player and laughs as he says he’ll get his damaged knee replaced — someday, but probably not soon. After 13 years of sobriety, he no longer feels the need to run from the things behind him.

“I’m not ashamed of it,” he said of his one-time addiction to crack. “Not happy it happened. I think things I’ve gone through made me the man I am today.”

That man is the coach of the 10-1 Taft Senators, leading his players through a renaissance that includes becoming the first Cincinnati Public Schools team to win a playoff game since 1993. The Jeff Cargile who existed 13 years ago might never have believed he was possible.

Cargile had never touched drugs or alcohol when he started practicing at the Ohio State University. He made it to the Buckeyes on the strength of his career as an all-city running back for the Roger Bacon Spartans, and he was excited to play at a college level. He was excited to befriend his new teammates, too.

When some of them used cocaine, he joined in. It felt like a bonding exercise, he said. Recreation.

And then it ruined his chance to participate in what would have been the biggest game of his life: The 1985 Rose Bowl, one of many pitting OSU against the University of Southern California, his sophomore year.

He failed a drug test the day before, didn’t make the trip and never played for the Buckeyes again. Bereft of football, he continued his drug use.

“Looking back on it now, I really think it had a lot to do with my demise,” he said.

It was a lightspeed fall into a darkness that seemed to have no bottom. On his way down, he stole from his parents and spent a year in prison after failing a drug test while on parole.

“It took me to places to do things I never, ever thought I would do,” he said. “Ever.”

His son stopped his descent by threatening to cut off contact after years of disappointment. Cargile had missed his high school graduation. You’re going to lose me, he told his father.

“Out of all those people, he’s the only one who never stopped loving me unconditionally,” Cargile said. He remembers the realization that followed: “I have to do something. I’m going to wind up killing myself.”

He moved to Atlanta in pursuit of a fresh start and got clean in 2006. Three years later, he moved back to Cincinnati — ready to make amends with his parents and with football.

He joined Taft’s volunteer staff, then worked his way up to head coach in 2016. In the time between, he counseled the players, bonded with them and helped them with off-the-field challenges.

“You know they trust you when they can come and talk to you and ask you, like, ‘Coach, I haven’t eaten today,’” he said. “‘I don’t have a ride home. I don’t know where I’m going to stay tonight.’”

Some of them ended up staying with him.

Close relationships don’t always win football games, but they don’t hurt. Cargile said he’s proud of his team’s success, even if the weight of expectation sometimes keeps him up late.

Still, he won’t slow down. Helping the students at Taft is helping himself, in a way: The self that exists now, sober and determined to walk a straight path, and the lost, scared self that exists in the distant past.

He’s never watched the Rose Bowl game he missed out on in college. He doesn’t need to.

“If I could just help one person still out there struggling, estranged from their family, it’s all worth it to me,” he said.