Taylor won't rule out midseason trade, but is focused on winning with 'the guys in the locker room'

Bengals coach believes in his players 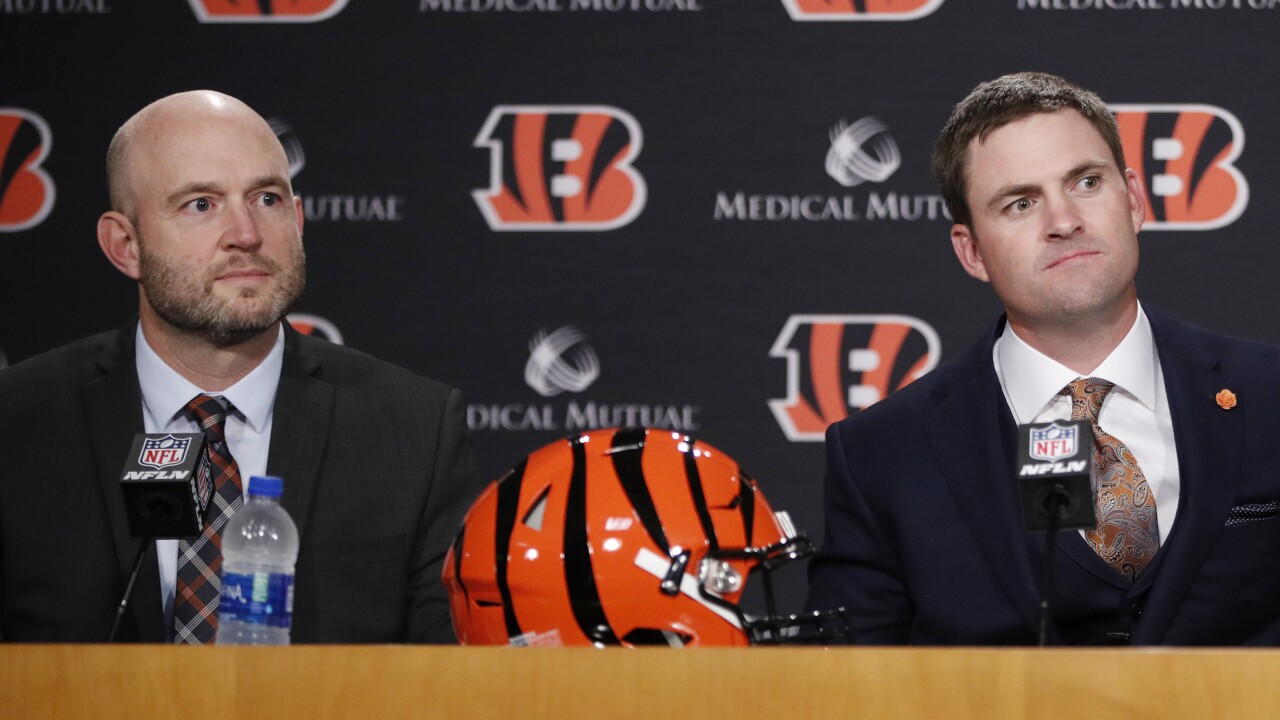 Joe Robbins | Getty Images
Zac Taylor, right, looks on along with Cincinnati Bengals director of player personnel Duke Tobin after being introduced as the new head coach for the Bengals at Paul Brown Stadium on Feb. 5, 2019 in Cincinnati.

CINCINNATI — The Cincinnati Bengals haven’t made a midseason trade since 2011, but coach Zac Taylor said the front office at least is listening to offers and discussing them daily.

A handful of Bengals players have been mentioned in the media as potential trade targets for other teams as the NFL trade deadline approaches Tuesday, but it remains to be seen whether the organization will buck its usual trend of sticking with the status quo now that Taylor serves as a new voice in the room.

The Bengals remain winless heading into their Week 8 game against the Los Angeles Rams on Sunday in London and are unlikely to make the playoffs this season.

“We meet every single morning, and we talk through anything that’s on the table,” Taylor said Monday. “There are a lot of things on the table. Every day — it’s not a state of the union — it’s an ongoing conversation, every single day, and we’re in a good place there.”

The last time the Bengals made a move in-season was when they shipped off disgruntled quarterback Carson Palmer to the Raiders at the trade deadline in 2011 after Palmer threatened to retire rather than return to Cincinnati. The picks the Bengals got in return resulted in the drafting of cornerback Dre Kirkpatrick and running back Giovani Bernard.

It has been even longer since the Bengals actually made a move to acquire an additional player in-season, the last one in 1972.

“We listen to anything,” Taylor said. “It’s not smart to pick up the phones and (not) listen to what’s said. Again, our approach is we have these guys in the locker room, and we have to focus on winning a game with these guys.”

That has been Taylor’s mantra all season – that the Bengals “are going to turn this thing around with the guys we have in the locker room now.”

When asked specifically if there are players outside the organization that could improve the team, Taylor again kept the attention on the guys he’s currently managing.

“That’s not really a thing for me to talk about right now,” Taylor said. “We’ve got these guys in the locker room that we believe in, and are working their tails off. I’ve seen a lot of these guys work since April that didn’t think they were going to get many opportunities, and now they’re getting them. I’m really motivated and excited to see these guys get a chance to prove themselves.”

Taylor said he doesn’t even keep up with the trade rumors unless someone brings it to his attention, like with the various reports that teams are willing to deal first-round draft picks for wide receiver A.J. Green.

“It’s not hard for me to tune out because I don’t know where I would hear it,” Taylor said. “Unless someone turns on the radio in my office, I wouldn’t know. I’ve said what I’ve said about A.J. (Green). I’m not going to go through the whole list of everybody. There was speculation about A.J., and I wanted to make it clear that he’s not going anywhere, and he’s staying here.”

It seems more likely now the team would be looking to unload Glenn, who seems to have lost Taylor’s trust after a reported scuffle between the veteran lineman and a member of the coaching staff last week. The next day, Glenn wasn’t even at the Bengals’ facility, and the team announced he had been suspended Friday.

Glenn was practicing with the scout team Wednesday.

Tight end C.J. Uzomah said he hasn’t heard much about the potential for any Bengals players to be traded, but it wouldn’t necessarily surprise him if something happened ahead of the trade deadline.

“I've seen a bunch of guys come and go over my time here, so nothing surprises me,” said Uzomah, although he has never witnessed an in-season trade since he was drafted in 2015.

Linebacker Nick Vigil still has confidence the Bengals can turn things around with the players they have now.

“I think we've got all the players in the locker room to turn this around and have a good season,” he said. “We have talent at every level in a lot of different positions, so we have to come together and find ways to win because we're in the games late in the games; we just have to finish.”

No one seems willing to step out and say the organization needs help, either now or for the future. When asked if there is a point where the team will start looking toward 2020 instead, Taylor said all he worries about right now is how to beat the Rams on Sunday.

“We have to win this game,” Taylor said. “When we show up on Monday morning, it’s how do we beat the Rams. That’s the conversation right now. That will make everybody feel a lot better. You put in all this work for the last number of months, and it hasn’t paid off yet. That doesn’t mean there’s not progress being made in a lot of areas. Some is seen, and some is unseen, but we still find the positives to build off of.

“They understand that we shouldn’t feel like a 0-7 team. That’s what our record is, but that’s not how we should feel. We’ve had the opportunity to win some of these games in the fourth quarter, and who says this can’t be the game that we get this done? Let’s focus on that and make sure we’re all working to achieve that, and understanding where we’re at. We shouldn’t feel like a 0-7 team. We’ve put ourselves in position (to win), and we have to find a way to win one of these.”