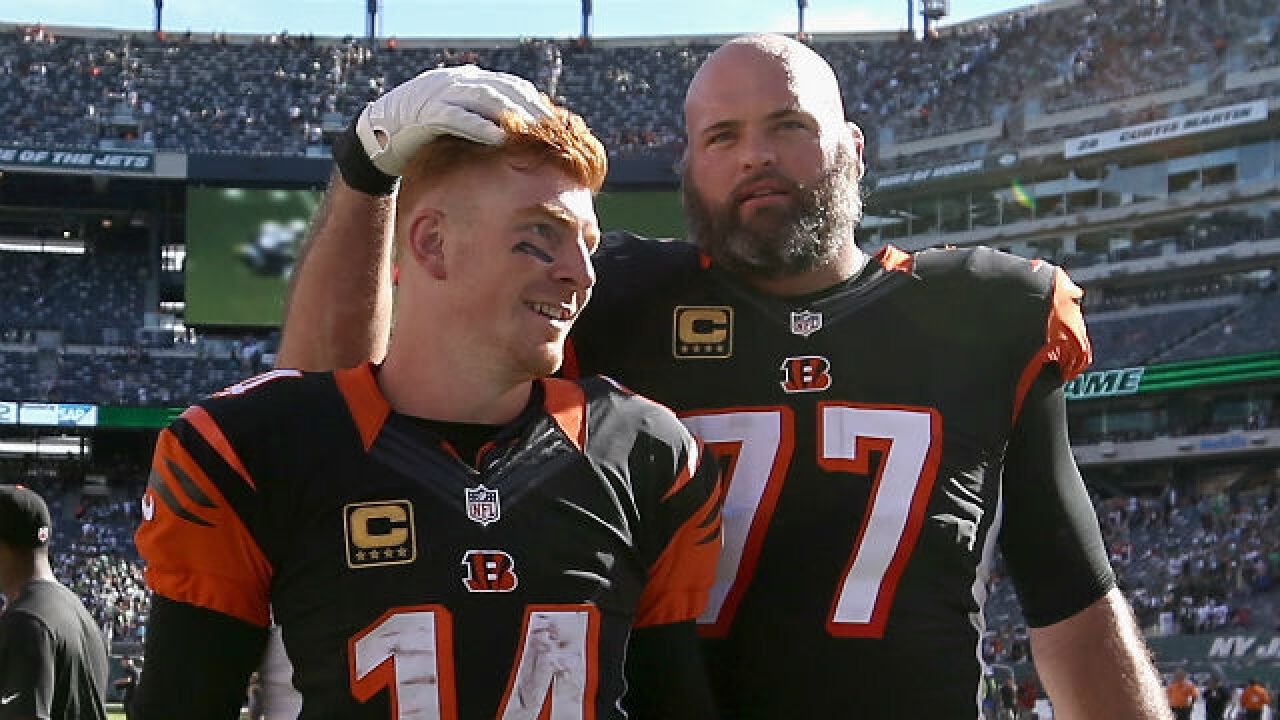 <p><span>EAST RUTHERFORD, NJ -  Teammates Andy Dalton #14 and Andrew Whitworth #77 of the Cincinnati Bengals celebrate after a 23-22 victory over the New York Jets  at MetLife Stadium on September 11, 2016. (Photo by Streeter Lecka/Getty Images)</span></p>

LONDON, England — The Bengals went to the playoffs in seven of the 11 years that Andrew Whitworth was a starting tackle, and they haven't been back since he left for the Rams.

Jared Goff's total quarterback rating was 63.1 last year when Zac Taylor was the Rams QB coach. It's 37.7 this season.

Who misses whom more?

It's clear how much the 0-7 Bengals have missed Whitworth, who's in his third year with the Rams after signing as a free agent in 2017. Just ask Andy Dalton.

“Whit was really good for us,” the Bengals quarterback said last week. “I loved every year that I got to play with him.

Dalton and the Bengals will be reunited with their former left tackle when they play the 4-3 Rams in London on Sunday.

Dalton and the Bengals offense owed a lot of their success to Whitworth, who had Dalton's back all those years. It's no coincidence that Dalton's best total quarterback rating was 70.5 in 2015, when he was sacked just 20 times. His QBR is 34.5 this year, and he's already been sacked 24 times in less than half the season.

The Bengals' offensive line fell apart after they drafted two worthless offensive tackles, Cedric Ogbuehi and Jake Fisher, 1-2 in 2015 and didn't match the Rams’ contract offer to Whitworth in 2017. But it turned out to be a good move for Whitworth, who finally reached the Super Bowl with LA last season.

Do the Rams miss Taylor? The impact of losing their quarterback coach is harder to measure, especially against the injury to running back Todd Gurley.

Goff says he's wary of going against his former position coach’s defense Sunday, but he's probably just trying to say the right thing. The Bengals defense hasn't been able to stop anyone this season.

”(Taylor) does know a lot of stuff, not only about me, but about our whole offense and our whole team,” Goff said. “With that being said, we have changed a lot in the last 6½ months. Since he was here, we’ve changed offensively, defensively, schematically at times. There are the thoughts that he might be a step ahead of us, but we’re going to go out and play our game.”

Goff, a two-time Pro Bowler, struggled during a three-game losing streak before regaining his edge in a 37-10 blowout of the Falcons last week. The Rams had more success in Atlanta by moving Goff out of the pocket and letting him throw on the run. Goff passed for 268 yards and a pair of touchdowns to Gurley and tight end Gerald Everett. He also had a 1-yard TD run.

Passing game coordinator David Waldron said Goff was particularly effective on play-action keepers as he broke containment, got out on the edge and still had time to set his feet and follow through on his throws.

The Rams have always had such options in their playbook under head coach Sean McVay, but they were able to take advantage of them with the Falcons’ lack of pass rush.

“I think the only difference is that the whole defense is kind of moving with you so that windows come open at different times,” Goff said.

“Jared’s athleticism is something we want to take advantage of,” McVay said.

Taylor is finding it a whole lot harder than McVay did to engineer a one-year transformation of a longtime losing franchise.

When McVay took over the Rams nearly three years ago, he both inherited and assembled the ingredients to build a great offense immediately. Gurley, Goff and Rob Havenstein were already on the roster, and the Rams quickly added Whitworth, Robert Woods, and a host of supporting players to create one of the greatest one-season turnarounds in NFL history.

When Taylor took over the Bengals last winter, he brought intimate knowledge of McVay’s offense and the wisdom of two years behind the Rams’ curtain. He installed an offense quite similar to McVay’s schemes, and he is calling the Bengals’ plays himself, just as McVay does for LA.

Trouble is, the Bengals had a fraction of the resources available to McVay, and they clearly didn’t add talent with the same success. Their running game is the NFL’s worst behind a poor offensive line, which means the McVay offense’s play-action schemes aren’t fooling anybody.

Taylor and McVay have talked frequently during the season, although the calls and texts slowed as they approached this meeting.

"I have a whole lot of respect for him. I love him as a friend. To see the way that he’s handled things only further demonstrates why he’s a special person.”

RELATED: Taylor tries to keep trade rumors in the background.