Here's what Joe Burrow brings to the Bengals

LSU quarterback is No. 1 pick 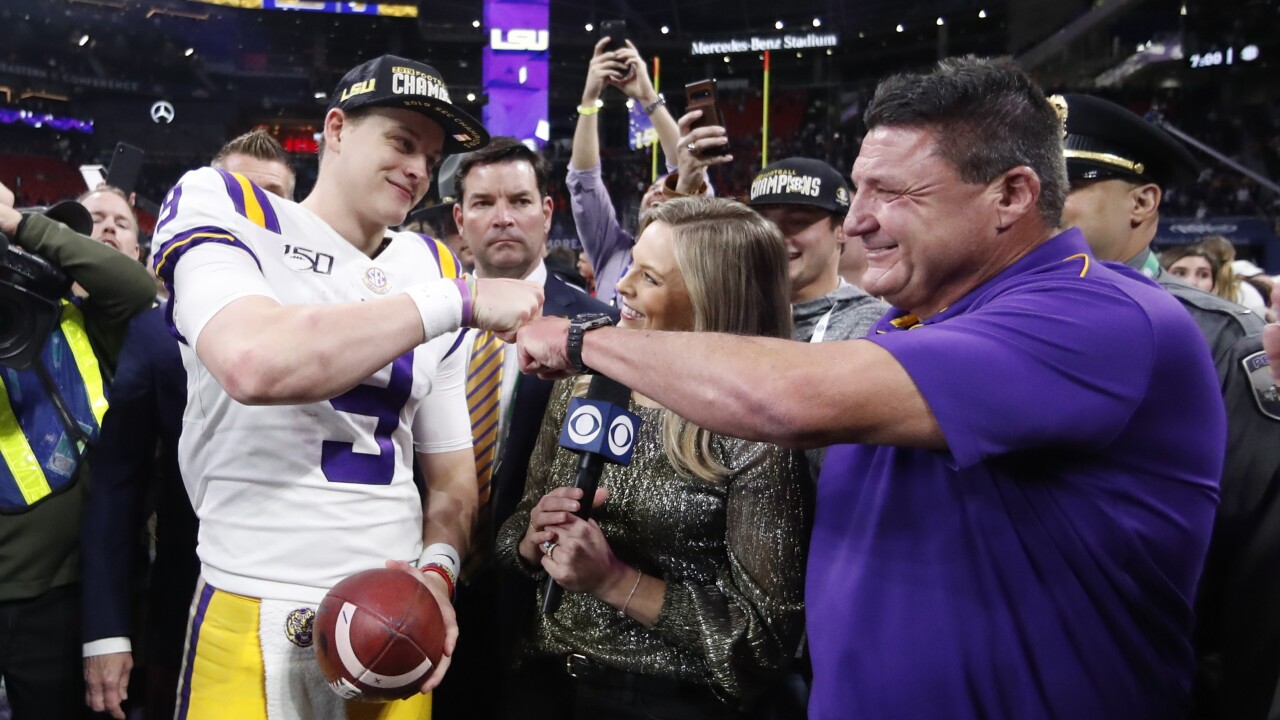 (Copyright 2020 The Associated Press. All rights reserved. This material may not be published, broadcast, rewritten or redistributed.)
John Bazemore/AP
FILE - In this Dec. 7, 2019, file photo, LSU quarterback Joe Burrow and LSU head coach Ed Orgeron celebrate after the Southeastern Conference championship NCAA college football game against Georgia, in Atlanta. Orgeron is The Associated Press Coach of the Year after leading the top-ranked Tigers to a Southeastern Conference championship and their first College Football Playoff appearance.(AP Photo/John Bazemore, File) 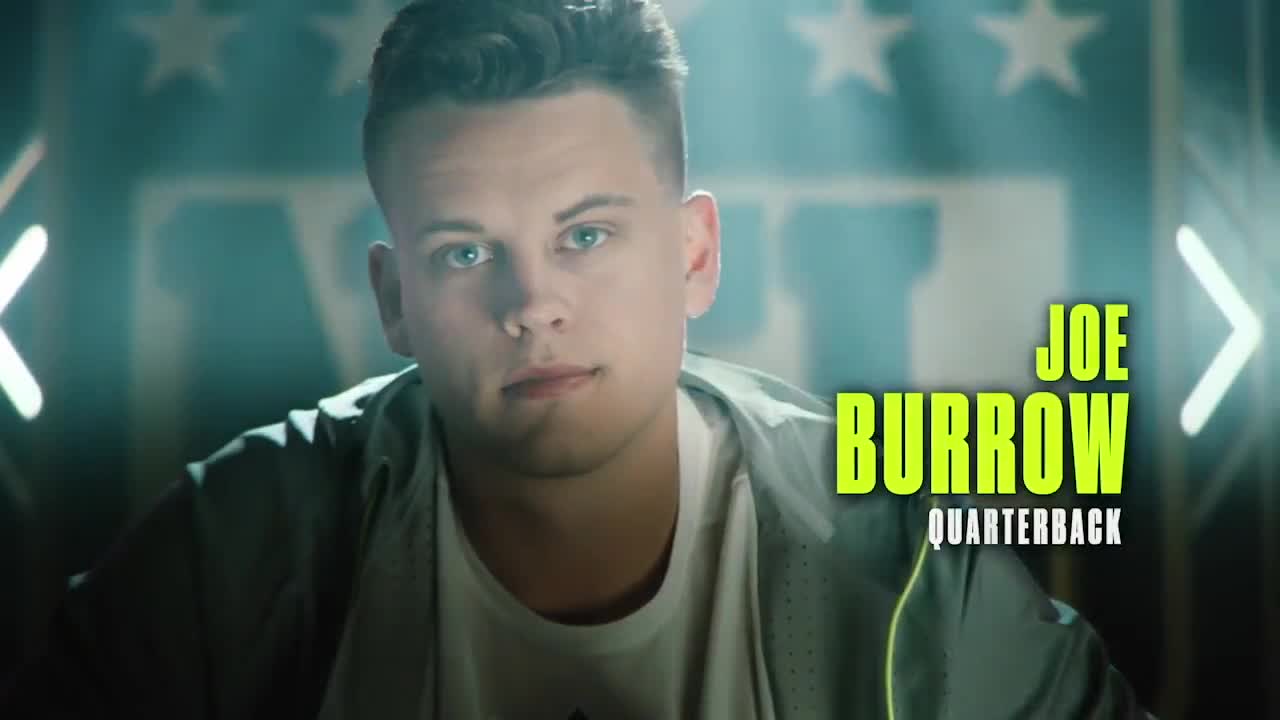 CINCINNATI - What will the Bengals get from picking Joe Burrow No. 1 in the NFL Draft Thursday night?

The passing touch of Ken Anderson and Andy Dalton, the big personality and outspoken leadership of Boomer Esiason, the Heisman Trophy-winning skills of Carson Palmer and the caring and social-mindedness of all four.

And yet, what this Ohio kid brings mostly is hope to a city long disappointed by its NFL and MLB teams. And as his Heisman Trophy acceptance speech showed, Joe Burrow can be a leader beyond football, a positive symbol for the whole community.

Joe Burrow talks about the impact of his Heisman Trophy speech

The immediate reaction from Bengals fans figured to be more subdued than usual. No public rejoicing of Bengals fans in bars and public gatherings. But that didn't mean Bengals fans weren't celebrating in their homes, cheering "Who-Dey" and waving Bengals flags in their yards, honking their car horns and maybe even setting off fireworks.

The fans – and the franchise – have a lot riding on Joe Burrow. They yearn to know:

Will the 23-year-old rookie from LSU, who will be expected to take the starting job from Dalton, be able to lead a turnaround from four straight losing seasons?

Can he quickly take the Bengals to playoff victories that no quarterback has done since Esiason 30 seasons ago?

Can he win a league MVP award like Esiason and Anderson did, or lead the Bengals to a Super Bowl like they did in their MVP seasons?

That’s a lot to put on the rookie quarterback of an NFL team that went 2-14 last year, but fortunately many experts – including Anderson, Esiason and Palmer – see the Heisman winner who led LSU to an unbeaten season and the national championship as a once-in-a-generation talent.

In other words, the sky’s the limit for the southeast Ohio native and for the team that drafts him.

RELATED: Joe Burrow is the pride of Athens County.

Anderson, who spent 15 seasons with the Bengals (1971-86) and led them to Super Bowl XVI, told Bengals.com he admired Burrow’s accuracy and cool. Anderson was the first NFL passer to complete more than 70% of his passes in the Super Bowl era.

"His accuracy both from the pocket and on the move," said Anderson, the Bengals’ all-time leader in passing yards (32,838) and a second-round pick from Augustana (Illinois) College. "It looks like he's got great composure. He doesn't get flustered. He looks like he's a pretty confident guy without being cocky."

Esiason, who played nine seasons with the Bengals after being a second-round pick from Maryland in 1984, advised Burrow to disregard criticism of the Bengals and team owner Mike Brown. The talk was that Burrow should refuse to play for the Bengals because he wouldn't have the pieces to win with here.

“I go all the way back to when I first gave him the helmet on 'NFL Today' after he had won the Heisman Trophy and I said, ‘Look, this is not the dead-end street for NFL quarterbacks that you may think it is,'” the Super Bowl XXIII QB said on the Bengals Booth Podcast With Dan Hoard.

“As a matter of fact, there have been a number of us that have flourished in Cincinnati because Mike Brown understands that he’s going to put good players around you and get the most out of you. Just ask Kenny Anderson, ask Andy Dalton, ask Carson Palmer and ask me," Esiason said.

“No team has had four quarterbacks start at least 93 games in the modern era of the NFL. That tells me that the franchise understands about stability for that position, and I tried to impart that on Joe.”

Palmer, the No. 1 pick in 2003 from USC, has been taking heat for allegedly spreading hate toward the Bengals. Palmer put in eight seasons with the Bengals but refused to play in 2011 and forced a trade in a dispute with Brown, claiming the Bengals organization wouldn't spend enough money to win. Palmer’s brother Jordan, a Bengals backup QB in 2010, became a go-to trainer for college quarterbacks entering the draft and has been working with Burrow.

But Carson Palmer denied ever badmouthing the Bengals to Burrow or telling him to steer clear of Cincinnati.

“I would never project on another player that you should do this or do that,” Palmer said on the Pat McAfee Show.

“I have been critical of that organization for years and I have my reasons for that. But Joe is extremely mature and extremely bright. You don’t give him the credit he deserves to think some old, washed-up QB told him not to go there and so he’s not going to go there.”

Palmer said he noted the Bengals spent $150 million on other teams' unrestricted free agents in the offseason and said Burrow would have noticed that, too.

“He probably saw that and said, ‘Man, the Bengals are really spending money on free agents.’ We’ve never seen them do that. Maybe they’re changing, adjusting, coming of age.”

It's probably no coincidence that the Bengals finally put their money on the table this offseason, knowing they had Burrow as their ace in the hole.

Perhaps Peyton Manning has the best view on the subject of rookie quarterbacks meeting high expectations. In 1998, the Colts went 3-13 in Manning’s first year after they drafted him No. 1, then did a complete turnaround to 13-3 in Manning’s second year.

Manning said Burrow called him recently and asked for advice on being a rookie quarterback.

“He asked about some of the things that I tried to do as a rookie that maybe he can apply to his NFL career," Manning said on ESPN’s SportsCenter. “I told him, 'Look, Joe, if you're the first pick in the NFL Draft, you are going to a team that has earned the first pick in the NFL Draft. There are going to be some holes there. There's a reason the Colts were picking No. 1 that year. There's a reason the Bengals are picking No. 1 this year.'"

Manning said he told Burrow to be prepared to take his lumps, but to learn from them.

"I learned some things in the fourth quarter of those blowouts about what it took to be an NFL quarterback, and the next year we went from 3-13 to 13-3. That wouldn't have happened if I hadn't have hung in there and learned the ropes as a rookie, even though we took some bumps and bruises," Manning said.

"So that's what I tried to encourage Joe and all the other rookie quarterbacks, that your rookie year is not going to be the same as your senior year in college. But if you learn how fast the defensive backs are, how soon you have to get rid of the ball, understand defenses, you can become a better player and really get it going the year or two after that."

Burrow told ESPN he was prepared to battle through what may be rough times, especially with a delay to official team activities due to the COVID-19 crisis.

“Burrow reminds you of Peyton Manning,” Brandt said. “Burrow is faster than Manning, but his arm strength is equal.”

Brandt mentioned that both are students of the game and are known for their intense preparation.

Burrow almost wound up at the University of Cincinnati after deciding to transfer from Ohio State, where he spent three years but never won the starting QB job.

Burrow said his first choice was Nebraska, where his father and two brothers had played. After Nebraska didn’t want him, his main options were UC and LSU. UC had an edge because of Burrow's connection to coach Luke Fickell, who was on Ohio State's staff while Burrow was there.

But LSU coach Ed Orgeron won Burrow over when Burrow, his dad and brothers visited Baton Rouge. A couple of Cajun meals that featured boiled crawfish helped Burrow make his decision in favor of LSU, according to Sports Illustrated.

Burrow had the greatest passing season ever for a college QB in 2019 – throwing for 60 touchdowns and only six interceptions in 15 games with a completion rate of 76.3%.

He thrived under pressure, leading all qualifying quarterbacks with an 82.6 QBR under pressure, according to ESPN Stats & Information. He was also the best against the blitz, with a total QBR of 91.5.

Keeping injury free will be important for Burrow. Under Palmer and Dalton, the Bengals had 11-5 and 12-4 seasons in 2005 and 2015, respectively, but were ousted in their playoff openers after the starting QBs were sidelined.

Burrow is already making a big positive impression with his public awareness, something Anderson, Esiason, Palmer and Dalton all demonstrated in foundations they set up to help children or community causes. Anderson, who established the Ken Anderson Alliance to support adults with developmental disabilities, was named NFL Man of the Year in 1975.

Burrow was praised for his Heisman Trophy speech when he spoke about the poverty in his native Athens County and offered encouragement to the kids and families there.

“Coming from southeast Ohio, it’s a very impoverished area and the poverty rate is almost two times the national average. There’s so many people there that don’t have a lot and I’m up here for all those kids in Athens and Athens County that go home to not a lot of food on the table, hungry after school,” Burrow said. ”You guys can be up here, too.”

Burrow’s speech helped raise more than $510,000 in a fundraiser for the Athens County Food Pantry.

Taylor Rooks of Bleacher Report recently questioned Burrow about his social media accounts, saying they show he has strong opinions on topics such as racial injustice and pay for college athletes. When she asked Burrow how that would carry into the NFL, he replied: