From Bulldog to Tiger: Joe Burrow is the pride of Athens County 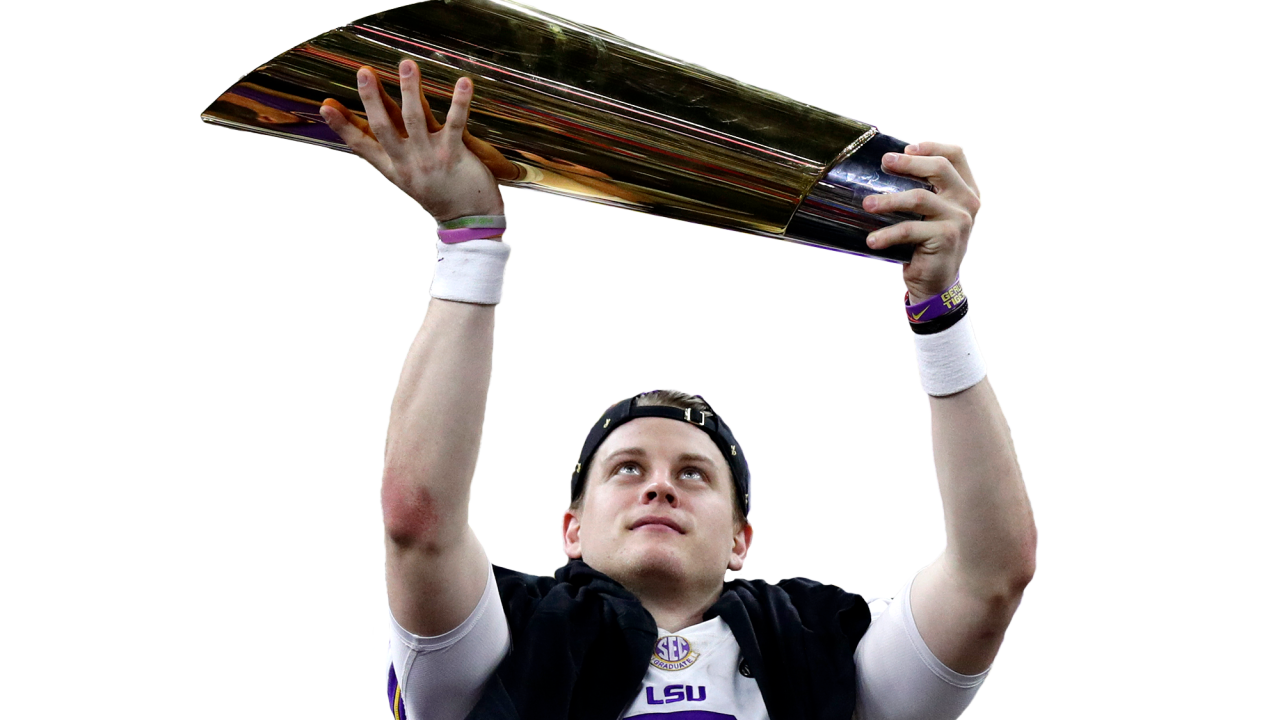 Vinson serves in the U.S. Air Force and didn’t want to pass up an opportunity to watch quarterback Joe Burrow lead Louisiana State University to a national title.

Eight days later, Vinson was back in Athens County -- a place where she grew up just like the younger Burrow.

“Just truly, truly amazing,” said Vinson, as she dined at Gigi’s Country Kitchen during a busy lunchtime. She attended nearby Federal Hocking High School. “I was speechless watching him the entire season to be completely honest.”

Vinson wore a purple and gold LSU T-shirt with “Legend” adorned on the front and Burrow’s name and familiar No. 9 on the back. She had ordered the shirt online and had it shipped to the Middle East.

“I adjusted my sleep schedule so I could wake up and be able to watch him win the championship,” said Vinson. “Of course you’ve got to root for the hometown guy. He is such a great story, from his time at Ohio State going all the way down to LSU. To see him succeed so much was truly amazing.”

A week after Burrow completed the undefeated journey with LSU at Mercedes-Benz Superdome, the Cincinnati Bengals’ potential No. 1 NFL draft pick was still the talk around Athens, where Athens Middle School is located, and its neighboring town, The Plains, where the high school sits atop a hill.

Bayou Burrow returned to his alma mater, Athens High School, on Thursday to hang out with the football program at Joe Burrow Stadium, naturally.

Bulldogs, past and present, got some work in today. The BROTHERHOOD. pic.twitter.com/x1KOyYkguh

“Proud doesn’t seem like a strong enough word,” said Athens High School football coach Nathan White, who was the offensive coordinator and quarterbacks coach when Burrow was a Bulldog.

“I don’t think anyone is overly surprised. We saw Joe do crazy things when he was here in high school. He took Athens High School – not historically known for a great football program – he took us all the way to the state championship. So that magical run that LSU had – it’s almost like we saw that five years ago here. The thing I’m most proud about isn’t his playing ability or the crazy stuff he’s done on the field – it’s how well he’s handled everything.”

White, a 1999 Athens High School graduate and former quarterback, teaches math at the middle school. He walked through the building Jan. 13 grasping a unique sense of anticipation for the game that night.

White reflected last week upon a time when Burrow returned home for a few weeks last spring and worked out in the high school weight room.

“Rarely does Joe look too excited,” White said. “He’s usually just calm and cool Joe. I could tell that he had a little pep in his step, if you will, about their new offense and truly believed they were going to spread it out and let it rip. To say that I knew he was going to break all kinds of records and win the national championship – of course I didn’t know that.”

Burrow, the Heisman Trophy winner and the 2014 Ohio Mr. Football recipient, has a story that is well chronicled in the national media. His Heisman Trophy speech made a significant impact in the amount of donations for the local food bank and other nonprofit organizations.

Athens High School assistant principal John Rogers was at a school dance in December when he watched Burrow’s speech.

“I was definitely having a hard time holding back tears because I thought he did a really good job,” Rogers said. “He is not a crier. And so when I watch other relatively emotionally strong men break down into tears – you know how much that meant to him and how hard he’s worked to get there – it definitely was an emotional moment for me, too.”

Rogers, a former high school athletic director and assistant football coach, has given plenty of media interviews but isn’t weary from the recent attention.

He sat in his office last week and smiled while recounting the anticipation around the high school for the national championship game. Most students and staff members wore purple and gold Jan. 13. Rogers texted colleagues and friends throughout the game as a wave of comments and reactions were shared.

A sign at the bottom of the main office door shows the transition of Burrow from a Bulldog to a Tiger. The secretaries in the main office weren't surprised to see a TV camera enter the doors early last week. Burrow is synonymous with Athens County as much as he is Baton Rouge.

“I think the whole town, though, has definitely been overcome by LSU fervor,” Rogers said. “That night I think the town was kind of buzzing. And when it was finished – I think it kind of vindicated that loss in the state championship. I think people felt like this was Joe’s chance.”

Burrow threw for 446 yards and six touchdowns and rushed for 54 yards in a 56-52 loss to Toledo Central Catholic in the 2014 Division III state final at Ohio Stadium. Southeast Ohio never forgot the season.

Yet, Rogers said LSU’s title this month had a far-reaching impact in Athens County beyond sports.

“It’s definitely galvanized our town around not only Joe but the cause of raising money for the food pantry,” Rogers said. “The LSU Tigers have been very popular in Athens – something that I don’t think anyone saw that connection coming. Once Joe got his footing in the way everyone knew he could that definitely got the town excited again. I think some people were re-living some of the run we made in ‘14 with that senior class. It kind of brought it back to life again.”

Burrow’s friends and fans know about the obvious possibility that the Bengals could select him No. 1 in April, but they were still grasping what he did in New Orleans last week. If the Bengals select Burrow, it would be icing on the cake.

Vinson, a longtime Bengals fan, will support Burrow wherever he goes in the NFL draft.

“You can’t ask for a better representative for Athens and southeast Ohio,” Vinson said. “To be on such a national stage is really an amazing thing.”