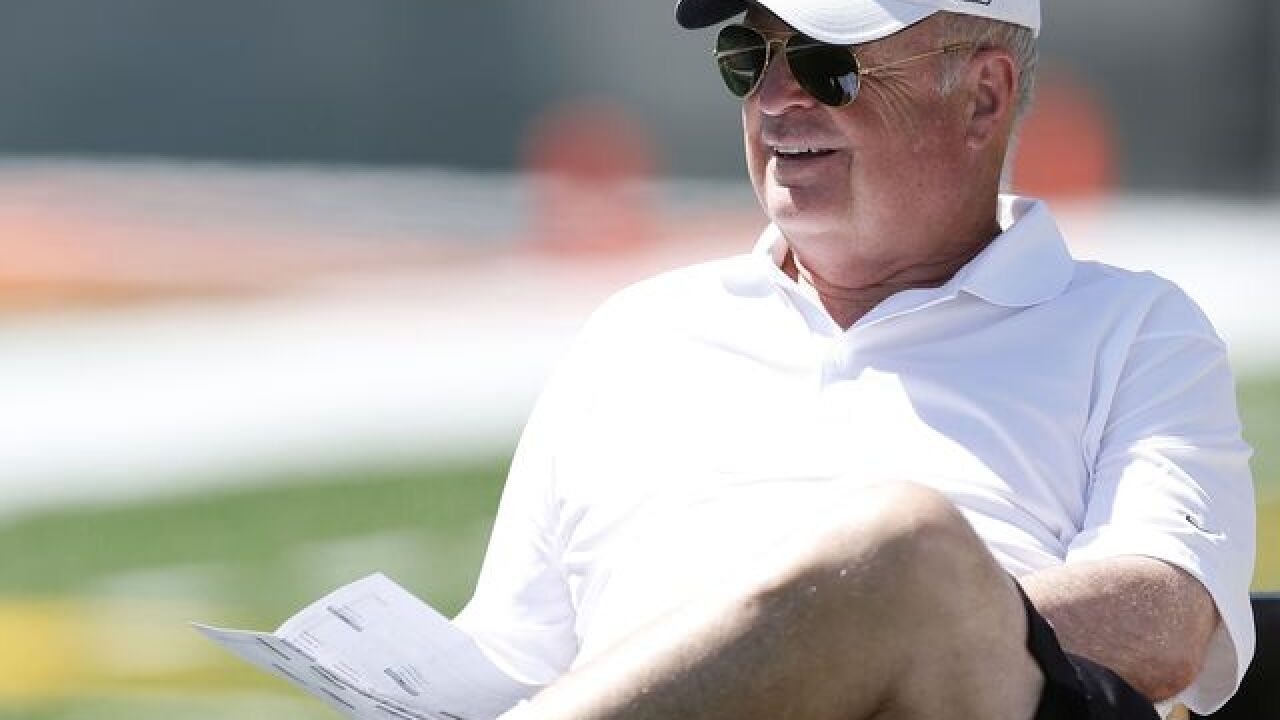 CINCINNATI — Cincinnati Bengals owner Mike Brown can’t help but think at least a little about his legacy as he approaches his 84th birthday next month.

The Bengals are 186-259-3 and have no playoff wins in Brown’s 28 years as principal owner and president. He would like to at least see things turn around before his time is up.

As his team gears up for training camp, which opens Saturday at the University of Dayton’s Welcome Stadium, Brown is counting on new coach Zac Taylor to right the ship. Cincinnati is coming off three straight losing seasons, and Brown parted ways with 16-year coach Marvin Lewis in January.

If nothing else, Brown wants to win the fans back.

“I wish we had won more games,” Brown said Tuesday at the annual pre-camp media luncheon at Paul Brown Stadium. “That will forever be something that disappoints me, but I have to accept it is where it is. I hope that I will have enough time to see a spurt here that will be enough to energize our fan base, get them excited. We know we have to reach out to them to get them to buy in and get them back with us.

"We disappointed them. You can’t do that as often as we have done. We are paying a price for that. We have to turn it around. If that happens, I’ll leave the stage feeling fulfilled.”

But most aren’t expecting a quick turnaround under 36-year-old Taylor, a first-time head coach who hired two coordinators who have never held their current position for a full season in the NFL.

USA Today predicted a 3-13 finish for the Bengals, which would put them in a tie for the worst record in the league, according to the projections. However, Brown has more faith the offseason changes can make a difference.

“I'm aware of how we have done,” Brown said. “I wish we had done better. And I look forward to the opportunity to try to do better. That's what we've been about this whole offseason. It's been a lot this offseason. We added a new coaching staff and that's a big turnover. These are different people, they have different ways for the players, they bring in a totally new system. There will be a lot of learning to do, a lot of catching up to do. ... It will rev up here pretty fast starting soon, and that's good.”

Taylor and his staff have their work cut out for them this training camp. They spent the entire offseason trying to establish a rotation on the offensive line only to lose two key pieces at the end of it.

The Bengals are down a tackle and guard after losing first-round draft pick Jonah Williams to a potential season-ending labrum tear the last week of OTAs and Clint Boling to retirement earlier this month. Cordy Glenn is expected to move back to left tackle after spending most of the offseason workout program at guard.

Christian Westerman and veteran newcomer John Jerry likely will compete for the left guard spot, but it’s also likely the team will add someone to fill the roster spot Boling vacated.

“The biggest priority right now is establishing our guards and creating that tackle depth,” Taylor said. “And so those are things that we go into camp and we feel like we've got the bodies there that are ready to compete and ready to step up and fill those roles. But it remains to be seen. We haven't had pads on yet, so we haven't had a chance to see these guys up close in person. There's some battles that I'm excited to see as we get underway here.”

The Bengals excited the fan base Tuesday when they signed wide receiver Tyler Boyd to a four-year extension and discussed efforts to lock A.J. Green up as well.

Boyd, a 2016 second-round draft pick, emerged last year when he caught 76 passes for 1,028 yards and seven touchdowns. His contract was set to expire after this season, his fourth in the NFL after a standout career at the University of Pittsburgh.

“It's a good thing for the team,” Brown said when asked about why it is important to lock up a player like Boyd. “He's a fine player, and he's proven it. We try to extend the guys that matter, and we see him as a player who is a difference-maker. He is a solid guy, he competes, he makes big plays, he doesn't scare -- he has the ingredients we look for in a wideout, a guy who plays his position, and I'm glad we have him.”

Bengals director of player personnel Duke Tobin said the decision to extend Boyd has no impact on whether the team will be able to do the same for Green, who also is entering a contract season and is set to make a base salary of $12 million this year. Tobin said the team is now turning its focus on the 2011 first-round pick.

“(They are) two separate things, both good players,” Tobin said. “We would like to retain both of them, and we will work to do that and see what we can get done as we go here. But, obviously, Tyler has earned it. He's come on and become a big part of our offense. He's a young player and still has upside, so we are excited to have him back for the long-term. … It's not an either/or. It's a both, and we'll see where we can go with the other (Green).”

Brown likes having Boyd and Green as major pieces to the offense but said what excites him most going into training camp is having Taylor calling the plays. The West Coast offense could benefit players like Boyd and Green, and Taylor helped the Los Angeles Rams make a Super Bowl run with a similar scheme.

After seeing Taylor maneuver through his first offseason program, Brown feels even better about his hire. He believes the fans will, too.

“He's very composed, he's a very bright young man, he loves what he does,” Brown said. “He works hard. He loves ideas. He can present them in a way that works. People accept what he says. He's confident. I think he's a good package and that it will have a good result.”