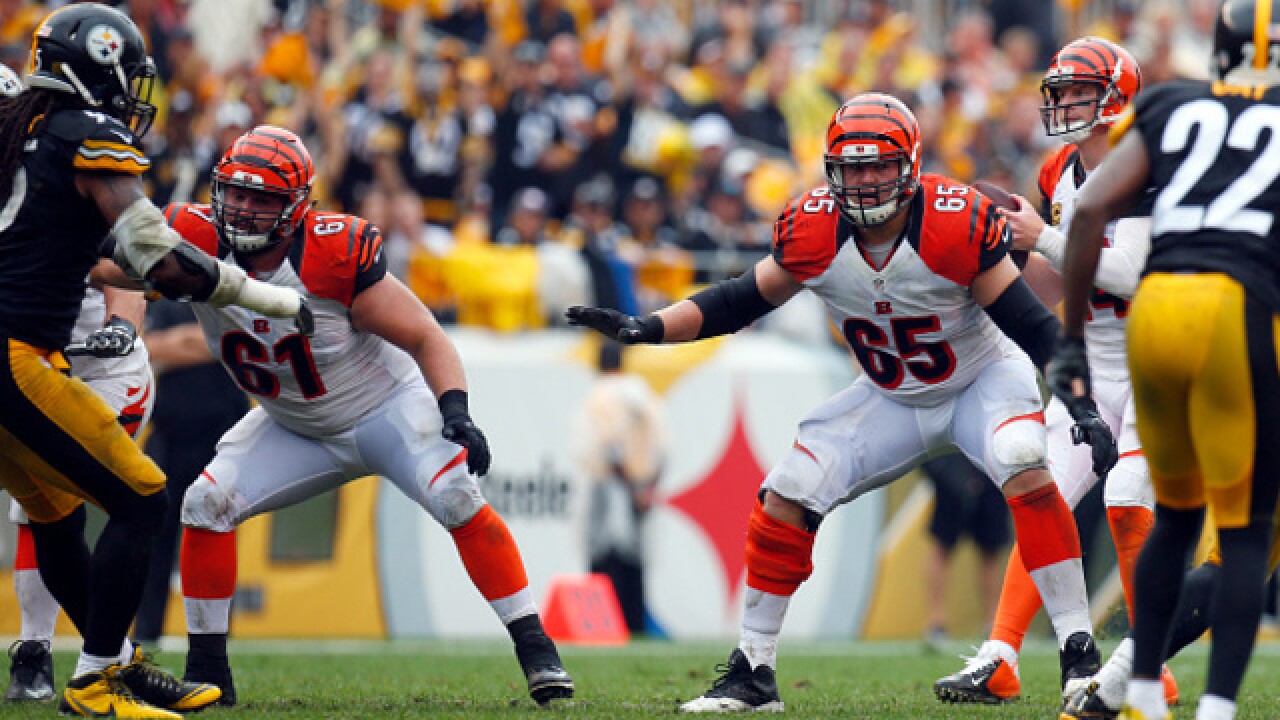 CINCINNATI — Citing medical reasons and family concerns, 30-year-old Bengals left guard Clint Boling announced his retirement from the NFL on Monday, leaving the team with another big hole on the offensive line.

Boling, an eight-year starter, developed a blood clot in his right leg that moved up to his lung, and he didn’t practice during the spring due to the risks associated with it. Boling said it was time to put his health and family first. He and his wife have two daughters, ages 3 and 1.

"When it comes down to it, having a family to take care of - my wife and two little girls -- at some point you have to make a decision that it's not about you, and that's ultimately what it came down to," Boling said in the locker room Monday afternoon.

Boling was the Bengals' most dependable o-lineman, playing every snap last season.

Hoping to correct their 6-10 record last year, the Bengals had made several offseason moves to fix their offensive line, rated one of the worst in the NFL. Instead, it's 10 days before training camp and they're missing the left side of their line.

"That's just the nature of the NFL," said first-year head coach Zac Taylor. "You always look for guys to stand up and fill those roles. We've got a lot of guys that are going to be fighting for some opportunities, and we'll see how that plays out during training camp."

The Bengals previously announced that their first-round draft choice and projected left tackle, Jonah Williams, will probably miss the entire 2019 season after shoulder surgery for a torn labrum.

Furthermore, Alex Redmond, the starting right guard last season, has been suspended for the first four games of 2019 for violating league policy on performance enhancing drugs.

Perhaps anticipating Boling's departure, the Bengals signed guard John Miller from the Bills to a three-year deal, drafted Ohio State guard/center Michael Jordan in the fourth round and signed guard John Jerry, an eight-year veteran who didn't play last year after being cut by the Giants.

Miller had been projected to replace Redmond at right guard, so that presumably leaves Jordan to battle veterans Christian Westerman, Trey Hopkins and Jerry at left guard. Jerry started every game for five of six seasons with Miami and NYG between 2012 and 2017.

After drafting Williams, the Bengals had incumbent left tackle Cordy Glenn practicing at left guard this spring, but Williams' injury forced Glenn back to left tackle.

The Bengals haven't announced their depth chart for training camp.

Boling, a fourth-round 2011 draft choice out of Georgia, spent all of his eight NFL seasons in Cincinnati, helping the Bengals to five straight playoff appearances from 2011-15, including AFC North division titles in 2013 and 2015. He was the No. 1 left guard from 2012-18, and appeared in 114 career games (including playoffs) with 112 starts.

“Clint is a first-rate person, someone we all counted on and looked up to,” Bengals President Mike Brown said in a club release. “As a lineman, he never got the credit he deserved. That is often the case with good players who do their jobs well, but around the team, he was highly respected and appreciated beyond his playing abilities.”

Said Bengals Director of Player Personnel Duke Tobin: “Clint epitomizes everything a scout hopes for when they draft a player. He’s been a rock and stabilizing force for eight seasons."