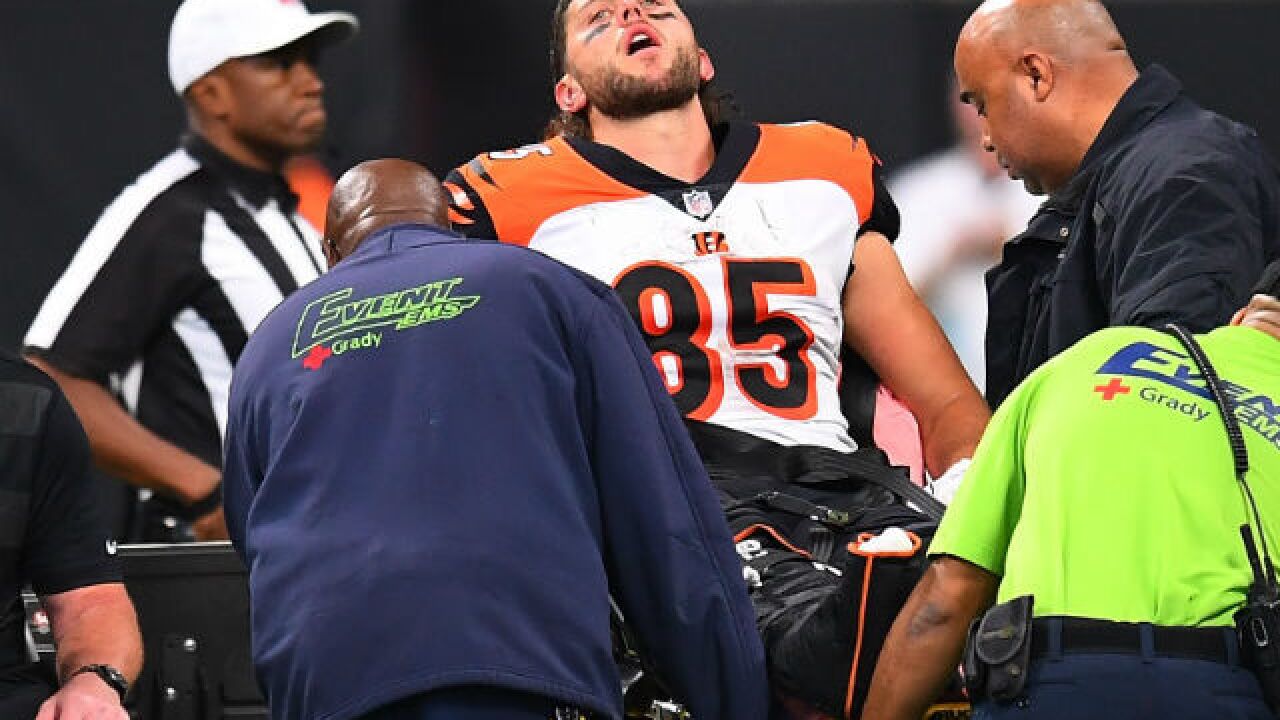 Image copyright 2018 Getty Images. All rights reserved. This material may not be published, broadcast, rewritten, or redistributed.
<p>ATLANTA, GA - SEPTEMBER 30: Tyler Eifert #85 of the Cincinnati Bengals is carted off the field after an injury during the third quarter against the Atlanta Falcons at Mercedes-Benz Stadium on September 30, 2018 in Atlanta, Georgia. (Photo by Scott Cunningham/Getty Images)</p>

The Bengals tight end dislocated and broke his right ankle while being tackled early in the second half against the Falcons Sunday, marking his third straight season-ending injury.

"This is the hardest I've worked to put myself in a position to help this team succeed and having this happen crushes me," Eifert posted on social media. "If I've learned anything from before, it's not a time for self pity and negativity. The only thing to do is move forward with optimism.

"With the support of my family, friends, trainers, teammates and coaches, this will soon be another obstacle that was overcome and life will go on. Thanks to everyone who sent prayers and well wishes my way!"

Eifert's injury was gruesome to watch and probably reminded fans of Tim Krumrie's injury in Super Bowl XXIII. Eifert's right ankle twisted under him as he was tackled by Falcons linebacker De'Vondre Campbell after a third-quarter catch. Video appeared to show Eifert's foot badly contorted as he lay in pain on the field.

Shocked teammates watched as Eifert's leg was placed in an air cast.

VIDEO: Watch the play at NFL.com.

Former teammate Andrew Whitworth, now with the Rams, spoke for all.

Prayers for my guy @tylereifert
Man that has continued to show what resilience, determination, and toughness look like through his injuries. Such a great attitude about it each time! No doubt he will attack this the same. #respect

After the game, Bengals running back Gio Bernard tweeted this:

Hate this for my brother @tylereifert . So much more than football. Much love

Players from both teams came over to console Eifert as he sat in a cart before being taken off the field. Eifert had tears in his eyes and waved to fans applauding him, then covered his face.

Eifert, who caught a TD pass in the first quarter, has been dogged by major back, shoulder, elbow and ankle injuries that threatened his career and limited him to six games the past two seasons. He worked hard to get back into playing condition this year and signed a one-year, incentive-laden deal.

A.J. Green's TD catch with seven seconds left enabled the Bengals (3-1) to pull out a 37-36 victory. Eifert had four catches for 38 yards.