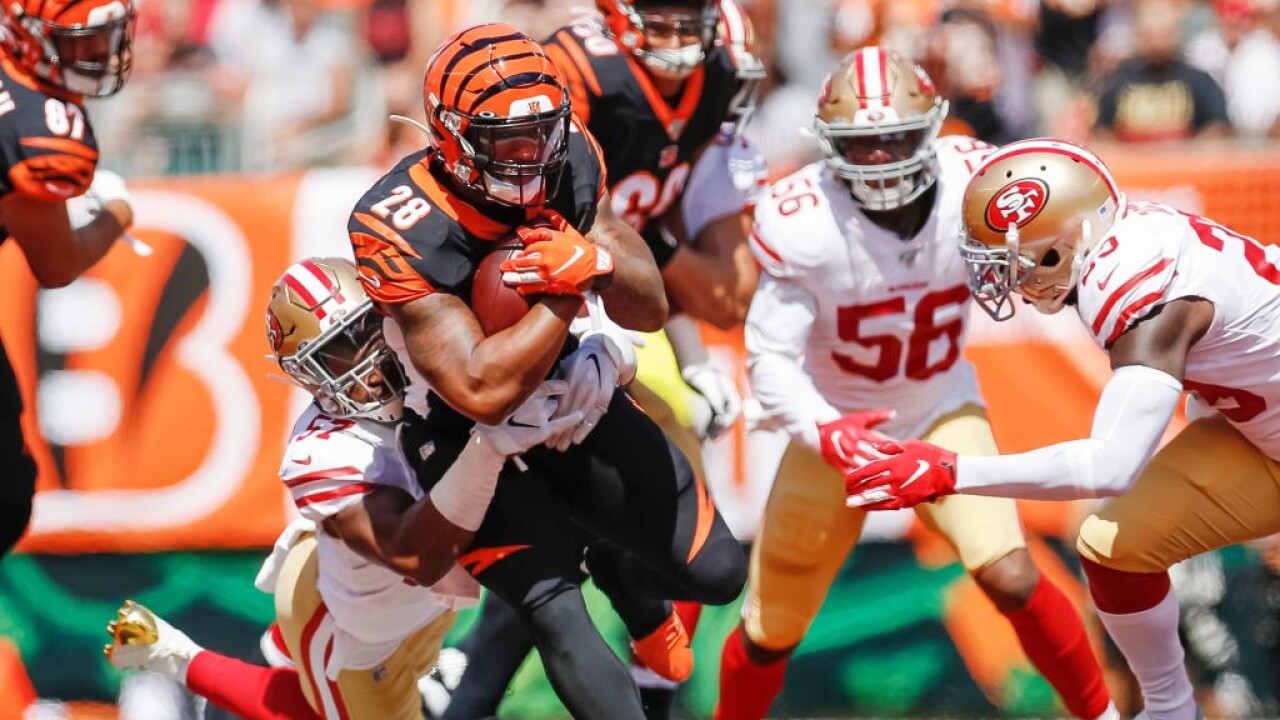 CINCINNATI — Joe Mixon knows the ugly rushing numbers - his own and the Bengals' overall.

He's barely been able to get back to the line of scrimmage, and that has to end if Cincinnati is going to avoid another freefall.

Mixon has averaged only 1.6 yards per carry in opening losses to Seattle and San Francisco. It's not all his fault - a patchwork line has given him and Giovani Bernard nowhere to go.

''I'm going to step it up, and you definitely can expect a change real soon,'' Mixon said.

RELATED: Mixon tries to smooth things over with fans.

It's more than just one running back picking up the pace.

Mixon led the AFC with 1,168 yards rushing last season while averaging 4.9 yards per carry in an offense that missed quarterback Andy Dalton, receiver A.J. Green and tight end Tyler Eifert for a significant part of the season.

First-year coach Zac Taylor wanted to make the running game a focus of his offensive scheme and showcase Mixon, who has proven a reliable receiver out of the backfield as well.

A line that's been depleted by injuries failed to give Mixon and Bernard any room in the first two games, forcing Dalton to throw the ball 93 times.

The 49ers shut down Mixon on Sunday and pulled away to a 41-17 victory that underscored the Bengals' imbalance - they managed only 25 yards on 19 carries.

Mixon is feeling the frustration.

Mixon has run for only 27 yards on 17 carries this season. Two runs went for no gain and five resulted in a loss as defenders poured into the backfield. He has only two runs longer than 4 yards, with his longest going for 9 yards.

Much of it is linked to a line that's been a work in progress since left tackle Jonah Williams tore a labrum in the offseason and left guard Clint Boling retired before the start of camp because of a blood clot. Cordy Glenn moved back to left tackle but has missed the first two games with a concussion. Andre Smith moved to left tackle but suffered a groin injury Sunday. Rookie left guard Michael Jordan suffered a knee injury, forcing Billy Price to fill in.

There's been a lot of instability up front, and it shows.

''This goes way back,'' Price said. ''Football is controlled chaos. So you've got to go in and throw it around any way you can.''

The line remains uncertain heading into the game at Buffalo because of the injuries. Mixon twisted his left ankle during the season opener, but returned against the 49ers and said it wasn't an issue. Bernard hasn't had much better success, either, managing only 27 yards on 13 carries for a 2.1-yard average in the first two games.

''I've been playing terrible,'' Mixon said. ''Me personally, that's not what I do. I'm always on tip-top, A-game performance. But like I said, I'll get back to doing the things that I do best, and that's running that rock. I'm going to get it popping real soon.''