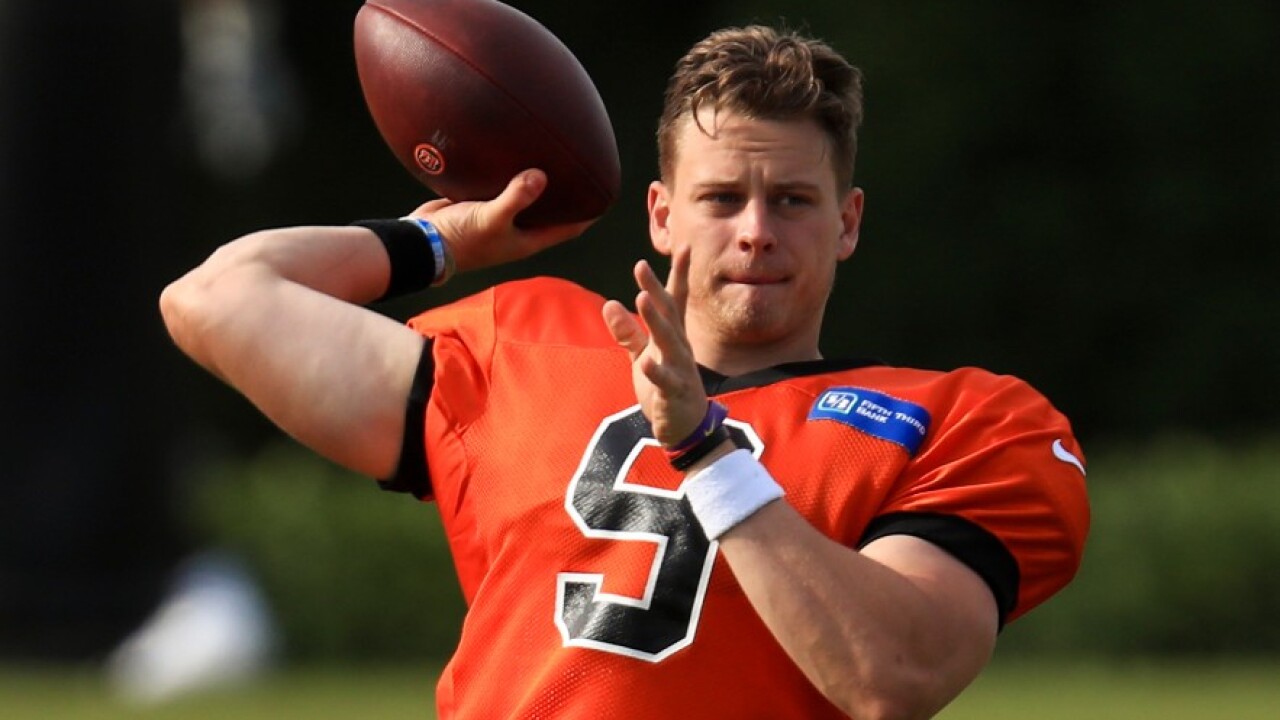 CINCINNATI — The Joe Burrow era officially begins today, and the Cincinnati Bengals are hoping it starts at least as well as it did for predecessor Andy Dalton -- and ends up far better.

The buzz around the region indicates belief that Burrow will carry the team to new levels, and he’s ready to take on that challenge.

“I’m not here to go .500 and squeak into the playoffs,” Burrow said in his first game-week press conference Wednesday. “I’m out here to win games and win championships.”

Burrow, the No. 1 overall draft pick in April, will make his NFL debut in a 4:05 p.m. game against the Los Angeles Chargers at Paul Brown Stadium. He will be taking the reins as the team’s new quarterback in a challenging situation that already is drawing comparison to Dalton’s rookie year in 2011.

Dalton, who is now with the Dallas Cowboys, came in as a second-round draft pick in 2011 during a lockout that wiped offseason workouts, but he collected a 27-17 win over Cleveland in his Week 1 debut. Dalton went on to win six of his first eight games and led the Bengals to a playoff appearance with a 9-7 record, a three-win improvement over the previous year.

Like Dalton, Burrow didn’t get a regular offseason to settle in with the Bengals as the COVID-19 pandemic limited teams to virtual meetings. He didn’t even get the benefit of preseason games like Dalton did.

“Obviously it is (unique), but I just try to come in and work like I always do, watch the film like I need to, prepare like I need to, so I try not to focus on all the pressure stuff,” said Burrow, who ironically attended his first NFL game when current Chargers defensive coordinator Gus Bradley gave Burrow’s dad tickets to watch the Seattle Seahawks play at Cleveland in 2011.

Wide receiver A.J. Green, the team’s last top 5 pick before Burrow, was a part of that transition with Dalton after the Bengals drafted Green fourth overall in 2011. After seeing how Burrow operates, Green is confident the former LSU quarterback can succeed as a rookie entering in similarly unusual circumstances.

Green said Burrow shares some of the same traits that helped Dalton make a smooth transition, and he’s not the only one that believes in Burrow. Burrow was voted by his colleagues as one of the seven team captains.

“Coming in as a young guy, you have to be smart, and that's something both Andy and Joe have,” Green said. “They are both very smart guys, so they both pick up stuff very well. … We have a very complex offense, a lot of plays, and Joe is picking it up like it's nothing.”

The Bengals have more weapons for Burrow now than they did for Dalton as a rookie, Green said. He compared the wide receiver corps to the 2015 unit that also featured Mohamed Sanu and Marvin Jones, who combined for 1,210 yards to go along with Green’s 1,297 yards receiving.

Cincinnati’s receivers do bring much potential, but that’s assuming Green and John Ross are healthy and that second-round draft pick Tee Higgins plays as advertised. Burrow didn’t even get a full training camp with all of them as all three missed practice time. Green sat for almost two weeks because of hamstring tightness and was limited all last week. Ross missed 10 days while away caring for his ill son in California and then suffered a minor arm injury upon his return, and Higgins also had a hamstring issue that gave him a late start.

Green isn’t worried about delays developing a rhythm with his new quarterback and said Burrow “is going to be great for the next 15 years.” However, Burrow’s success this season relies on several unpredictable factors.

The Bengals overhauled their defense and are counting on young linebackers and three new starters in the secondary to help keep Burrow off the field for long stretches, and the offensive line will need to be far more consistent this season to provide Burrow the protection he will need. He’s good under pressure but has yet to experience a hit in the NFL and will have Joey Bosa and Melvin Ingram chasing him Sunday.

Running back Joe Mixon will take off some of the pressure, as he recently signed a four-year extension worth $48 million that he wants to prove was “worth every penny” from the team, but even Bengals coach Zac Taylor isn’t ready to say Burrow’s first game will set the tone for his season.

Taylor doesn’t want Burrow trying to see his future in just one game. And it seems as though Burrow is listening based on his response when asked what he would say if someone told him he’s the most important player in the Bengals franchise in the last 30 years.

“I don’t really think about that stuff,” Burrow said. “I let you guys talk about that in the media. Write what you need to write, but I’m going to prepare like I always prepare and practice like I always practice to win games, because at the end of the day it doesn’t matter if we don’t win.”