As bad as it seems, Bengals players still believe Taylor will turn it around 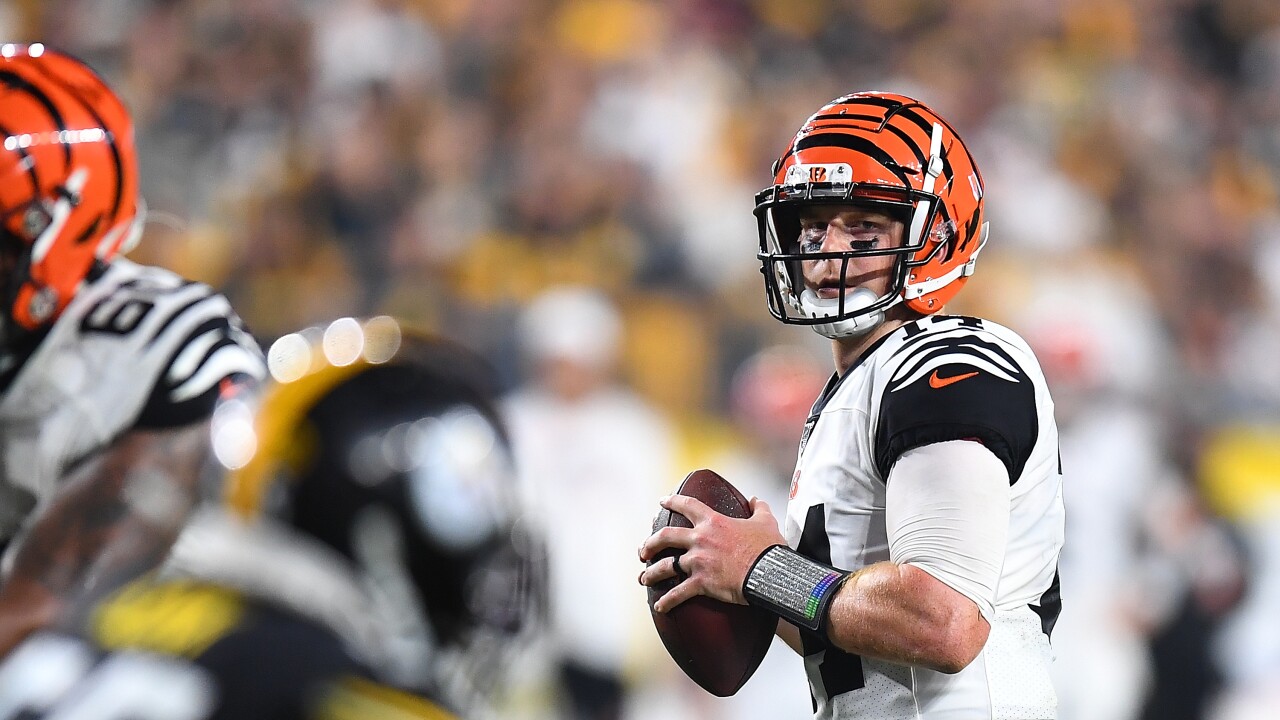 Joe Sargent | Getty Image
Andy Dalton of the Cincinnati Bengals looks to pass during the third quarter against the Pittsburgh Steelers at Heinz Field on Sept. 30, 2019 in Pittsburgh, Pennsylvania.

CINCINNATI — It doesn’t get much worse for the Cincinnati Bengals than a blowout loss on “Monday Night Football” against a rival Pittsburgh Steelers team that had been off to the same struggling start.

Through four weeks, the Bengals are still winless, and they now have lost 11 of their last 12 games dating back to last season. The fan base continues to grow restless, but players maintain they still believe first-year coach Zac Taylor can turn things around.

Taylor, 36, was hired to replace 16-year veteran Marvin Lewis in February after helping the Los Angeles Rams to a Super Bowl. The Bengals were counting on his fresh ideas and energy to bring back some excitement to the fans and locker room; however, it hasn’t yet translated into results.

Another golden opportunity awaits Sunday, when the Bengals host the Arizona Cardinals (0-3-1). Taylor has said he understands the team has to win back the crowds with their performance on the field. Four games in, he’s looking in the mirror first to find a way.

“To be quite honest, it starts with me,” Taylor said after Monday’s loss. “I've got to make sure the standard is higher than what it is right now because I haven't done a good enough job, and there's certainly things that I've got to improve on, and so I look in the mirror, the players look in the mirror, we come back tomorrow and we fight. ... We didn't expect to be an 0-4 team, but that's what we are right now, and so there's no excuses we can make.”


Taylor is going to have to look a little deeper for answers this week after losing a key weapon on offense, as John Ross went on injured reserve Wednesday.

Ross, a third-year player, suffered a sternoclavicular injury during Monday’s game. He had played in all four games for the Bengals this season, leading the team with 16 receptions for 328 yards and three touchdowns after missing the preseason because of hamstring issues. He was playing a key role in the absence of seven-time Pro Bowler A.J. Green, who remains out with an ankle injury.

“Tough news for him,” Taylor said. “He really worked hard to come back from injury during training camp. He was playing well, so it's tough to see a guy go through that when he's fought through this before. We'll be ready for him to get back when he heals up.”

The Bengals started the season with a career passing day for quarterback Andy Dalton, but the offense has gradually gone downhill since then. Cincinnati is averaging 306.5 yards of offense, which ranks 27th of 32 teams, and is among the bottom three for points scored (14.2).

Dalton threw for 418 yards and two touchdowns on 35-of-51 passing in a 21-20 loss at Seattle to open the season, and Ross accounted for 158 yards on seven receptions and both of those touchdown catches. Overall, Ross has made up 26% of the total yards this season and has half the team’s touchdowns.

Getting back on track will be difficult without two of the best weapons and an offensive line that allowed eight sacks and 12 quarterback pressures Monday, but Dalton said the players aren’t allowing frustration to impact their work.

“It's how this game works,” he said. “You just have to keep preparing the way you always do and you have to keep the same mindset that you are going to do everything you can to win the next one. That's where we are at right now.

“Guys are staying together, that’s the best thing. There are times in the game that you can get frustrated, but for us, everyone is staying together and that’s what we have to do at this point.”

Taylor said the Bengals just have to find ways to work through the adversity. For him, it’s figuring out a way to get the offense moving in different ways – perhaps utilizing the tight ends and running backs more in the passing game – and for the players, it’s rising to the occasion.

“You've got to be creative with your schemes to make sure they are accountable all the way down the field, and certainly we've got guys that really need to step up,” Taylor said. “Alex Erickson, Damion Willis, we'll promote Stanley Morgan Jr. and he'll be active this week -- we feel like we've got a good core of guys in there. They all know what to do. They got some reps, and we are going to be counting on those guys to step up.”

The defense has certainly had its struggles, too, but the Bengals didn’t play badly on that side of the ball in the first half Monday and some of the second-half letdown could trace back to the offense not keeping them off the field long enough. The linebackers still stand out as the weak spot, and the Steelers seemed to target them with a lot of short passes, which translated into some play-action success as well.

Some of the problems also could trace back to the adjustment period of a new staff, but Taylor doesn’t use that as an excuse.

“We can continue to grow as a unit and continue to identify what our strengths and weaknesses are,” he said. “We have to play to the best of our abilities. We’re better than what we’ve shown. That’s where we’re at through four weeks. It shows that we’re 0-4, and we haven’t capitalized on opportunities. We continue to identify the ways that we can improve. So far, we have a good plan for Arizona, and we’re excited to put it to the test.”

Taylor said seeing the character of the players and their resiliency in practice every week keeps him from worrying about whether they will continue to trust him and believe his message.

“They’ve responded at every turn," he said.

Hubbard said all the Bengals can do is keep believing – even if that message seems stale.

“I mean, we're not saying the season is over or conceding the season,” Hubbard said. “We just want to take it game by game and what happens happens. Crazier things have happened, but if we don't start winning games, what's it matter? All we can focus on is trying to win this week, and once we do that, win the next game. That's the mentality we have to have.”