Head coach coy in talking about No. 1 pick 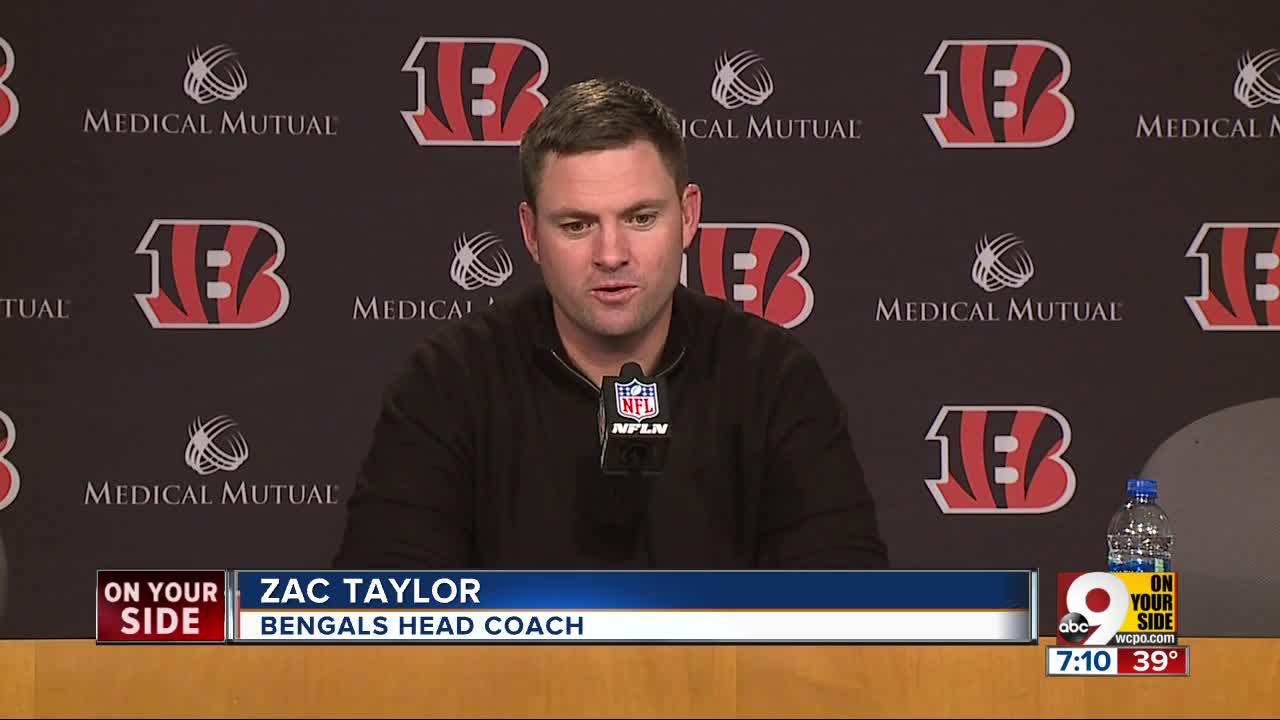 “It could go both ways,” Brown said. “I know what I hope happens.”

Zac Taylor's first season in Cincinnati went worse than anyone expected, even before it got started.

Left tackle Jonah Williams hurt a shoulder during offseason workouts. A.J. Green tore up an ankle during the first practice of training camp. A nearly all-new coaching staff took a half-season to figure things out.

By then, the outcome was set.

A 33-23 win over the Browns on Sunday mercifully ended a season that will become a reference point for Bengals futility. They finished last in the NFL and matched the club record for worst finish at 2-14.

Taylor's second season will be a much better gauge. Cincinnati has the top pick in the draft, so he can help choose his quarterback — stay tuned, Joe Burrow.

Taylor also got a better feel for the limitations that go with coaching the Bengals, who have only seven winning records in the past 29 seasons — shocking ineptitude in a league that rewards the lowly teams with easier schedules and higher draft picks.

At the last few home games, fans hung banners in the upper deck welcoming Burrow to Cincinnati. The LSU quarterback seems a good fit for Taylor's style of offense, but Taylor said at his Monday news conference that the team has a lot of homework to do before it settles on the No. 1 pick.

"I think you have to be very thorough with the first pick, no matter what position it is," Taylor said. "We have plenty of time to do it. You don't make any assumptions. You do all the work, with the personnel staff, coaching staff ... leave no rock unturned."

Not even a Heisman Trophy winner could fix this mess overnight.

“He's a college player,” Green said. “Everybody can say he's going to be the guy, and then you get to the NFL and it's a whole different game. You've got to re-calibrate yourself. I don't care how good you are in college, there's a reset button when you get to the NFL. But he's a winner for a reason.”

WHAT TO DO WITH DALTON

Andy Dalton, 32 years old and entering the final year on his deal, waved to the crowd as he jogged off the field at Paul Brown Stadium on Sunday, knowing it was likely his final game as a Bengals starter.

When Taylor benched Dalton for three games at midseason to take a look at rookie Ryan Finley, the ninth-year veteran bristled over the way it was done – no attempt to see if another team would take him in a trade. The Bengals could hold onto Dalton for another year to mentor the next quarterback, but he'd rather go somewhere else.

“I want to be a starter in this league,” Dalton said. “I know I can do that.”

Green is a free agent but would like to stay in Cincinnati if the team is willing to offer a suitable contract. The Bengals let left tackle Andrew Whitworth leave for the Rams after the 2016 season rather than match a three-year offer it considered too much. The Rams went to the Super Bowl and the Bengals' offensive line fell apart.

Green knows the same thing could happen with him.

“It's still a business at the end of the day. I've been hurt for two years, but I also know the value that I bring to a football team," Green said. "If we don't (reach an agreement), hey, no hard feelings.

The Bengals fired Marvin Lewis after his 16th season in part because of shrinking attendance. It fell even more this season, to an average of 47,178 per home game, the smallest at Paul Brown Stadium since it opened in 2000.

HOW TO GET IT RIGHT

The Bengals' problems are always bigger than a quarterback or a coach, which is why they've gone 29 years without a playoff victory, the fifth-longest streak of futility in NFL history. What happens next will be directly tied to ownership and the front office.

The Bengals thought they were headed in the right direction when they hired Lewis after a 2-14 finish in 2002 and took Carson Palmer with the first overall pick in the next draft. Instead, they managed only two winning records in the next eight years, and Palmer's frustration with the front office and ownership prompted him to insist on a trade.

Many of the things that frustrated Palmer are still in place.