Bengals QB Andy Dalton: 'I want to be a starter in this league' 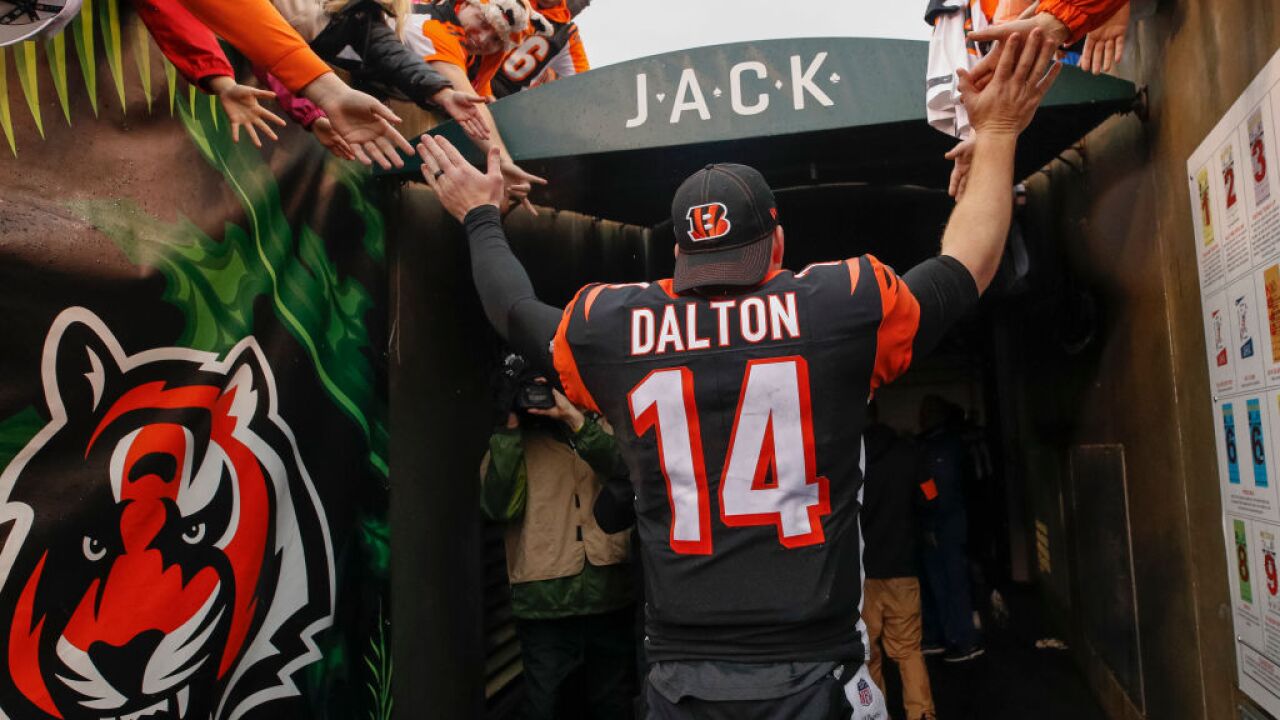 CINCINNATI – There was little fanfare. The Bengals announced the defensive starters prior to the game. The upper deck banner artists chose a nod to LSU quarterback Joe Burrow.

Andy Dalton’s imminent departure from the team, while not official, was merely a sub-plot on Sunday at Paul Brown Stadium.

If Dalton did take his final snaps in a Bengals uniform in Sunday’s 33-23 win against the Browns, he finished off a nine-year career here as the franchise leader in touchdown passes, pass completions, 300-yard passing games and game-winning drives.

And if it was the end, Dalton got to finish things off in a positive way.

“I have no idea what’s going to happen,” Dalton said. “I wasn’t going through my whole career, there were no life-flashing moments. But if it is the case, it was good to end it by taking a knee.”

Dalton should be remembered as one of the franchise’s most accomplished QBs. But for many Bengals fans, his legacy is tarnished by disappointment, missed expectations, and postseason failures.

That of course is not entirely Dalton’s fault. But it comes with the territory when you are the franchise quarterback who was drafted by the Bengals in the second round in 2011 to help them recover from a messy divorce from Carson Palmer.

Dalton helped lead the Bengals to the playoffs five times, but never advanced.

In 2015, Dalton led the Bengals to a 10-2 record before his season ended with injury, causing him to miss the playoffs, and the fourth-quarter meltdown against the Steelers.

For all his career and regular-season accomplishments, Dalton is 0-4 in the playoffs with one touchdown, six interceptions and a 57.8 rating.

Dalton had an up-and-down performance in Sunday’s win, too, going 16-of-28 passing for 190 yards with a touchdown and one poorly-thrown interception. He also had a rushing TD, the 22nd of his career. Since 2011, only Cam Newton has more.

On a few occasions on Sunday, fans chanted Dalton’s name. At other times, there was a spattering of boos. There’s no question that the “Red Rifle” is among this city’s most polarizing athletes. But he still has plenty of support in the Bengals’ locker room.

"They boo one time then they're chanting his name the other, and I'm thinking, 'This is crazy,' " tight end Tyler Eifert said of the fans. “You think back to all the things Andy has done for this organization and the team. It was nice to get him a win."

“I believe he’s going to end his legacy here,” said receiver Tyler Boyd, who eclipsed 1,000 yards receiving for the second straight year. “Why let him go? He helped me elevate my game in a lot of ways, on and off the field. He’s teaching me every day. I appreciate everything he’s done.”

Dalton has one year remaining on his six-year, $96 million contract. He is owed $17.5 million next season. The Bengals are not likely to pay that much to a backup QB with Burrow likely to be their selection with the No. 1 draft pick.

“The offseason stuff will take care of itself,” said Bengals head coach Zac Taylor after Sunday’s game. “My brain doesn't work that way. Our team is in the building right now."

If he is finished here, Dalton ended his Bengals career with a 70-61-2 record as a starter, the second-best mark for any Bengals quarterback with 10 or more starts. Virgil Carter went 12-10 in his 22 outings from 1970-73.

After Sunday, Dalton has 204 touchdown passes with 118 interceptions in his career.

"A true leader,” Taylor said. “He's kept us afloat. You need your quarterback to lead by example. Even when (backup quarterback) Ryan (Finley) was playing, he stayed by his side. He's just a guy you don't have any concerns about, on or off the field.”

The local community will miss the Dalton family. Following the 2011 season, Dalton and his wife, JJ, established the Andy & JJ Dalton Foundation, which conducts a wide range of community outreach efforts in the Cincinnati and Dallas-Fort Worth area.

The Dalton Foundation’s mission is to provide opportunities, support, resources and lifechanging experiences to seriously ill and physically challenged children. It received thousands of dollars in donations immediately following Dalton’s benching this season.

"There's been a lot of support for me and my family from this city,” Dalton said, “not just for what we did on the field but off it. This city has meant a lot to my family."

The 2019 season was especially difficult for Dalton, who was benched following a loss to the Los Angeles Rams in London, two weeks after he threw three interceptions in the fourth quarter of a loss to Jacksonville. But Finley fared worse, and Dalton regained his starting role four weeks later.

It is assumed that the Bengals have embarked on a significant rebuilding project, centered around the drafting of Burrow. Dalton, 32, made it clear on Sunday that wherever he plays next season, he doesn’t want it to be in a backup role.