'I just need to keep having fun' 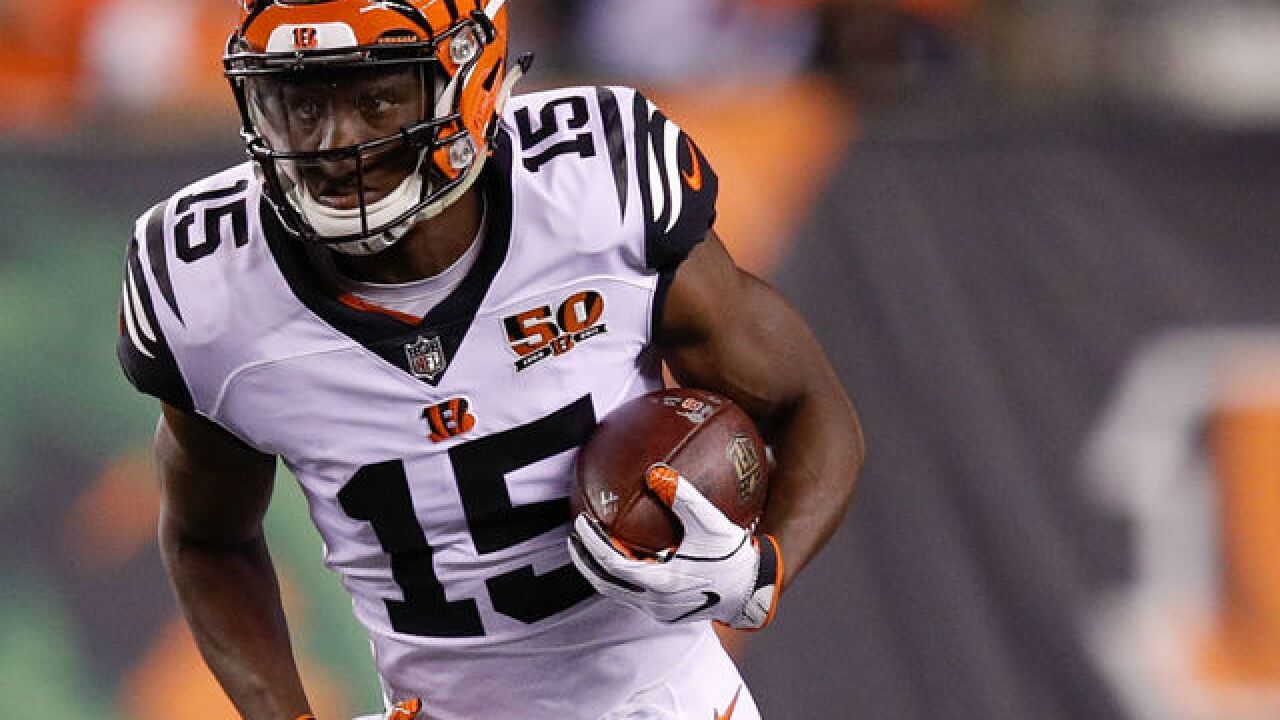 Image copyright 2017 Getty Images. All rights reserved. This material may not be published, broadcast, rewritten, or redistributed.
Joe Robbins | Getty Images
Bengals wide receiver John Ross runs with the ball against the Houston Texans during the first half at Paul Brown Stadium on Sept. 14, 2017.

CINCINNATI — John Ross remembers sitting in the chair at the dentist's in late February, hearing his phone buzzing almost 20 minutes straight while he was getting some work done on his teeth.

The Cincinnati Bengals third-year wide receiver knew something was going on but couldn’t take the calls.

Rumors had surfaced the Bengals were going to be shopping him to other teams at the NFL Combine, and Bengals officials were among those trying to get in touch with him, apparently to quash those notions.

Ross said he wasn’t too worried about it then, but after spending the past eight-plus weeks in the new staff’s offseason workout program, he’s glad the trade rumors proved false. He wouldn’t want to be anywhere else right now.

Cincinnati is in the midst of a three-day mandatory minicamp, which ends Thursday, before a six-week break ahead of training camp.

“I'm having fun out there, and I probably had one of the best weeks of my life at OTAs,” Ross said. “I just need to keep having fun, flying around and making plays.”

Re-energized by coach Zac Taylor’s new system and philosophies, Ross finally feels free to be the player he was before the Bengals made him their first-round draft pick in 2017.

The former University of Washington standout has battled injuries and self-imposed hurdles the past two years, including just 17 snaps on offense as a rookie and no catches. He totaled 21 receptions last year, and although seven of them were for touchdowns, he’s not yet established himself as a third reliable option behind A.J. Green and Tyler Boyd, as expected.

Ross is hopeful his time is finally coming.

“I think that's the message from everyone on the team, the coaches, the training staff – ‘just be you, run fast and have fun,’ ” Ross said. “When I'm having fun, I'm a completely different person than the up-tight person I've been the last two years, overthinking and letting things get to me that I shouldn't.”

It would have been easy to overthink his place with the Bengals this offseason as the new staff was settling in: Would he have a place in their offense? Has the team given up on him?

Then the trade rumors spread, and Ross’ agent had told him something might be happening.

“I was in the dentist and got like 20 missed calls, coach Taylor, all these people calling me and I couldn't answer because I was getting my teeth worked on,” Ross said. “So, I think they thought I was mad or something. I saw it, and I didn't know anything about it. My agent gave me a call and said it might be happening but he didn't know. I just kind of stayed relax because it wasn't anything I could control.”

Ross hadn’t spoken with Taylor before then and said he hadn’t expected to, knowing how busy the new coach was trying to organize a staff while preparing for the draft. He immediately was impressed by Taylor that first phone call, even if unusual circumstances created the conversation.

Now he’s glad Taylor is giving him a chance to become the player the Bengals thought he could be when they selected him two years ago. He gets a fresh start with the new staff.

“I told my agent and my dad, 'I'm blessed to be in this situation regardless, so whatever happens happens,' ” Ross said. “At the end of the day, I just have to stay positive about it. Then, coach Taylor called me and told me it was all fake, it was a rumor. It was a bit of a relief because there's something being built here and that's something I want to be a part of.”

The speedy wideout is looking at Boyd as a model for success this season.

Boyd also experienced some ups and downs early in his career, particularly in his second season, when he finished with just 22 catches for 225 yards after a much more productive rookie campaign, but the 2016 second-round draft pick bounced back last season to record 1,028 yards and seven touchdowns on 76 receptions.

He probably knows better than most what Ross is thinking right now as he tries to establish his role with the team in his third season, just as Boyd did.

“I don't think it's anything to do with his game at all,” Boyd said. “I think he's good enough to play and start in this league. I think what it is, is after your second year you aren't being targeted as much, you haven't really been that guy and you haven't been playing in games as much so you kind of get down on yourself and start looking ahead, like, 'What are they going to do with me? Are they going to get rid of me?' The way I approached it, I wanted to go into my third year and really the rest of my second season and just show them how great I could be. I wanted to make sure I put all the good stuff on film and just believe in myself. I'm better on myself all the time, so I just wanted to go show what I was really about.

“Once you get that second chance, I think he just has to take full advantage of it. I think that's his only error is he needs to just believe in himself, gamble on himself and don't think. I'd say, 'It's you. You know your ability. You're the fastest guy in the NFL.' You can't beat that. I wish I had that, just being able to be the best in something. His routes are clean. He has good hands. He's just got to trust in himself.”

Having a coach with an offensive mindset gives Ross confidence he’s in good hands.

“He understands every player so fast, he's just putting us in different situations and different spots to succeed,” Ross said. “You can tell his thought process, and it's cool to be around someone so offensive-minded. I wake up excited. He's going to put me in a position to make plays.”

So far this offseason, Ross seems to be in a better place mentally. He went through periods his first two years where he clearly wasn’t happy but is enjoying the interactive ways Taylor is teaching the offensive players and the emphasis the staff is putting on everyone having a role with the team.