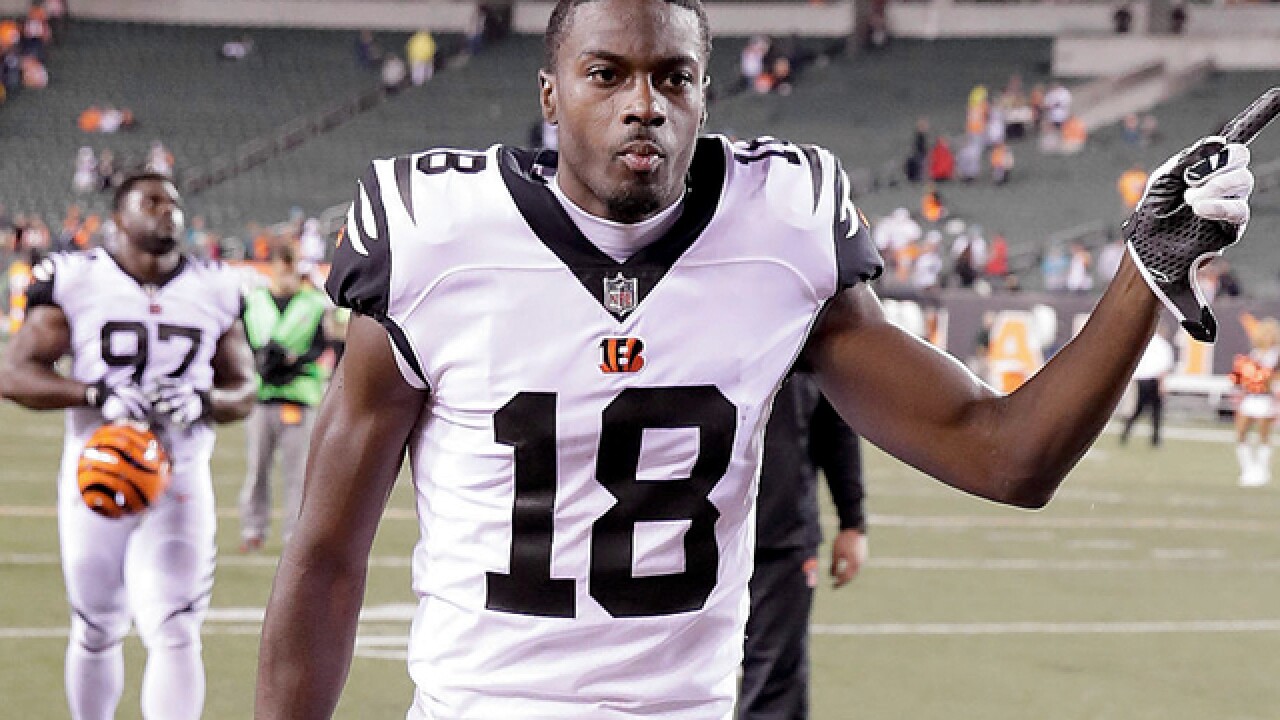 Andy Lyons
<p>CINCINNATI, OH - SEPTEMBER 29: A.J. Green #18 of the Cincinnati Bengals celebrates while running off of the field after defeating the Miami Dolphins 22-7 at Paul Brown Stadium on September 29, 2016 in Cincinnati, Ohio. (Photo by Andy Lyons/Getty Images)</p>

“I hate to put weeks on it. I don’t like to make that projection because everybody heals a little bit differently ... Hopefully, it’s not more than a couple of games," Taylor said.

Team officials had held out hope that Green could be ready for the Sept. 8 opener at Seattle, but they apparently got a new timeline from the doctor Tuesday.

"Unfortunate for him, he’s put a lot in, but as we all know, it could be a lot worse," Taylor said of Green. "So we’re thankful that it wasn’t a lot worse and he’ll get a chance to still show all the things that he was setting out to do this season.”

Media reports said the surgery was a minor procedure to "clean out" Green's ankle.

#Bengals WR AJ Green underwent a minor ankle procedure this morning to clean it out after his injury, sources say. The timeline should remain the same and Week 1 is still possible.

NFL insider Adam Schefter reported Sunday that Green tore ligaments in his left ankle and was likely to be sidelined six to eight weeks. The Bengals' opener is six Sundays from now.

Green was hurt while running a pass route Saturday on the first day of training camp at Welcome Stadium in Dayton. Green landed awkwardly on his left foot after he and cornerback Dre Kirkpatrick became entangled.

Bengals wide receiver Tyler Boyd blamed the condition of the high school field for Green's injury, calling the turf "terrible." The Bengals held the first practice there so the NFL, celebrating its 100th season, could honor the city for hosting the first NFL game in 1920.

The athletic director for Dayton Public Schools, which owns the 70-year-old stadium, defended it Monday in an interview with the Dayton Daily News. Shawna Welch said the 14-year-old field is likely not at the standard NFL players are used to, but she said the turf is safe and in fairly good condition because DPS maintains it.

The Ohio High School Athletic Association stopped using Welcome Stadium for football playoff games in 2015, though not necessarily because of field conditions.

"There are have been several newer high school sites become available to us in the last few years, so we went to those sites instead of Welcome," Tim Stried, OHSAA Director Communications, told WCPO. "I don’t think we have done a site survey to test the turf since 2013 or 2014."

"I couldn't run any routes out there. I'm falling all over the ground," Boyd said. "It was bad. It was rocks, pebbles out there. Man, it was somewhere we shouldn't have been."

Taylor, though, didn't blame Green's injury on the turf.

"I don't think the turf had anything to do with it," Taylor said at the end of practice.

Wide receiver Alex Erickson told WCPO: “Yeah, It was a little slippery, you know, whatever. It is what it is. Nothing you can do about it. The turf didn’t have anything to do with the injury, so I don’t think that was a factor."

The rest of the Bengals' training camp will be at Paul Brown Stadium.