FC Cincy players want to give fans reason to cheer 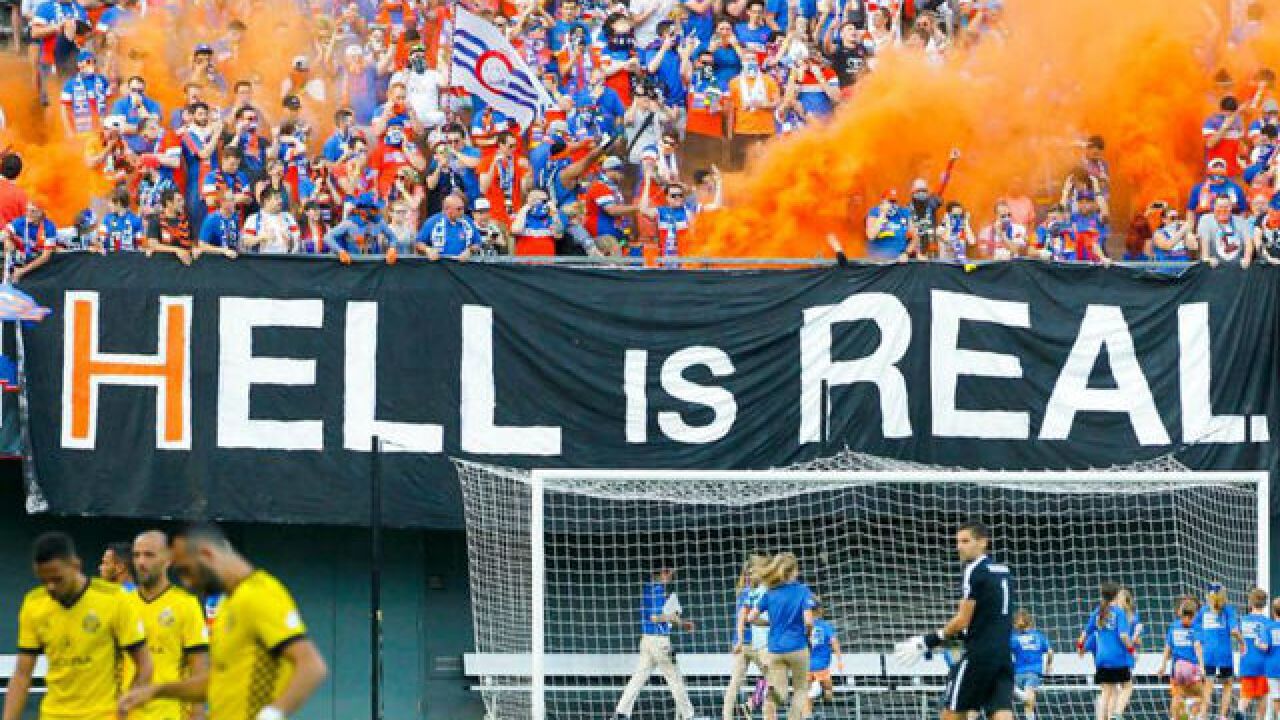 CINCINNATI — When Victor Ulloa chased down Columbus Crew winger David Accam and tried to pull him down in the late minutes of the first “Hell is Real” derby, he knew exactly what he was doing.

The FC Cincinnati midfielder was willing to do anything possible to prevent Accam from a potential breakaway to goal. He wasn’t surprised by the professional foul call and yellow card he was issued, but he didn’t expect to leave with a war wound.

As Ulloa fell to the ground, unable to take Accam with him, he ended up with a cleat to his face and five stitches near his eye. The photo of that moment began circulating on social media that night and became the poster card for the battle that already has developed around the Ohio rivalry.

Two weeks after the drama-filled 2-2 draw in Columbus, the teams will meet again at 6 p.m. Sunday at Nippert Stadium, expecting another eventful derby match.

“I'm definitely looking forward to playing them again,” Ulloa told WCPO.com. “These are the games that we know the fans really enjoy, and we do, too. It was a battle. We were both fighting to get the points, and I'm sure it will be the same way this next time.”

Although a rivalry game always packs a little more heat, Ulloa said the incident with Accam is behind both of them. They talked after the match, and Accam apologized. Ulloa knew his opponent hadn't purposely tried to step on him, as it might have looked in the photo.

Ulloa even posted the photo on Instagram and Twitter, tagging Accam with the caption: “Hey @daccam11 you lose a stud? I think I have it ... I’ll keep an eye on it for you! #Hellisreal”

Some commented on how Ulloa shouldn’t have tugged at Accam’s shirt in the first place. Allan Cruz was more successful in his attempt to bring Accam down immediately after that, and FCC managed to preserve the tie in a hectic finish that saw plenty of Crew chances.

“We were absorbing all the pressure and just trying to get out of there with the tie,” Ulloa recalled. “At that moment, it was just chaotic and we were emergency defending, as we like to call it, and we are just glad we could walk away with the point.”

Players say rivalry games like this one bring out a little extra grit in the teams, and this Sunday’s match shouldn’t be any different than the first in terms of the effort and fight to win.

“That sums up a rivalry game,” forward Darren Mattocks said. “It's always going to be a little more gritty, a little more fight out there, because it's bragging rights, and we know how much it means to the fans and the club. Every game is important, but it's a little extra when you play your rivals.”

Captain and center back Kendall Waston said there also was more chatter and trash talk in the game against Columbus on Aug. 10, and that’s usually the case in rivalry matches. He declined to elaborate on what kinds of things are said between the players.

“It always happens,” he said. “Sometimes there are a lot of cameras or mikes all over the place, but how we say, 'What happens on the field, stays on the field.' There's a lot of things going on.”

It’s more difficult to get away with petty fouls in these games, too, because officials are prepared for more heat and physicality.

“There is no safe place,” Waston joked. “With VAR and all those things, nothing can get away, so the only thing is you've got to be really smart to do whatever you want to do. Derby games are different from the regular games (in that way).”

The “Hell is Real” derby gives both teams something to play for in a season that isn’t headed anywhere.

FCC and Columbus are the bottom two teams in the Eastern Conference, with the Crew nine points ahead of last place. Cincinnati has eight matches left and the playoffs are almost certainly out of the picture.

“To get into a playoff spot is very difficult right now, so we know to win this game is that happiness for the fans, and it's that encouragement to finish this end of the season the best as possible,” Waston said. “It won't change (the view on the season), but it would help in that we at least win something for the fans because they have been supporting us throughout the season and in those difficult moments.”

Mattocks said “all the past results will be totally forgettable, because this means a lot to the fans.”

Head coach Ron Jans similarly wants to give fans something to enjoy.

“When you watch our games, you have to enjoy yourself, and that happened a lot (in the first Crew game) -- good things, chances, penalty kicks, the score -- so that we need to continue,” Jans said. “I think we are going to do that on Sunday against Columbus.”