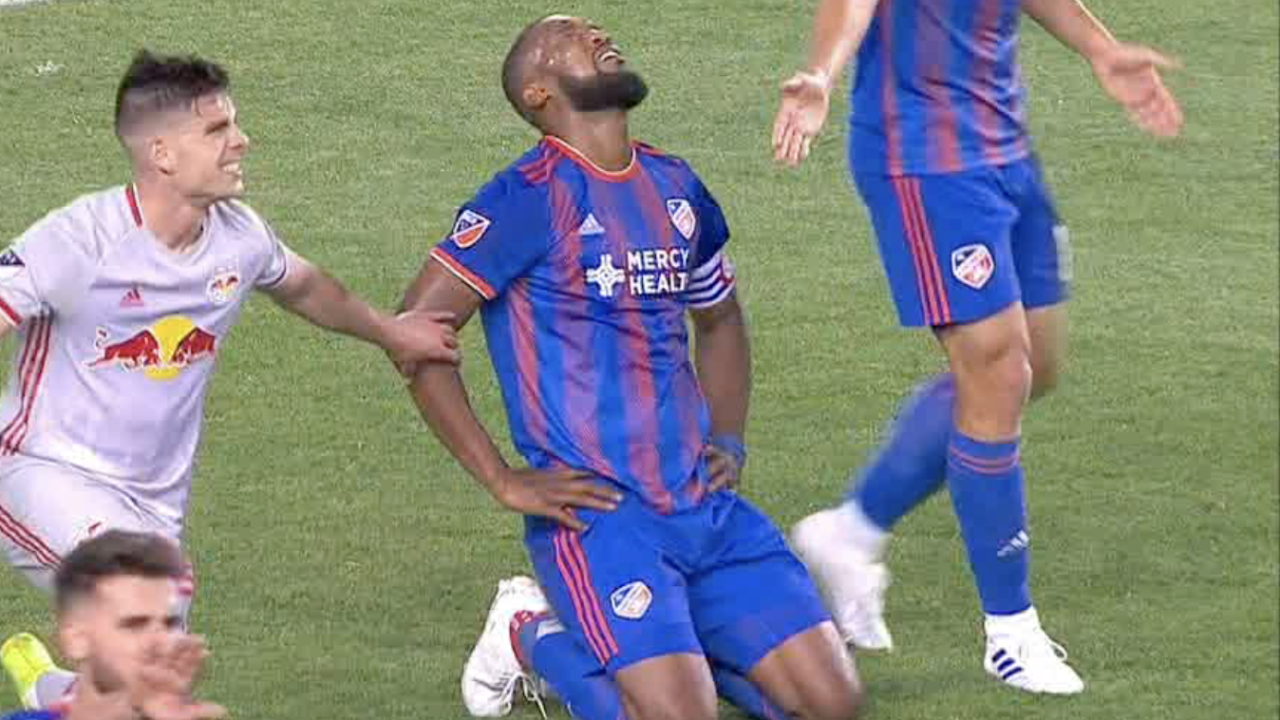 HARRISON, N.J. — If it weren't for bad luck, FC Cincinnati would have no luck at all.

The Orange and Blue hit wood three times and saw its scoreless drought reach three games and 341 minutes in a 1-0 loss to the New York Red Bulls Saturday night.

Darren Mattocks and Roland Lamah had shots crash off the post, and Kendall Waston had a header bounce over the top of the crossbar in the second half for FC Cincinnati (2-5-2).

"Luck just isn’t going our way right now in terms of putting the ball in the back of the net," said Mattocks. "We’re getting our chances, but it’s just not going in. This is a low point in the season for us in terms of goals productivity, but we’ve just got to stay on course. I keep saying it for two, three, four weeks now. but we’ve just got to stay together because as soon as they start going in, we’ll be good.”

Maybe so, but it was a poor first-half effort against a Red Bulls team (2-4-2) that came in with a five-game winless streak that most frustrated coach Alan Koch. New York out-shot Cincinnati 9-2 in the first half.

“At halftime, the guys were a little disappointed with how they came out and played in the first 45 minutes. I think we were a little too timid and probably gave the Red Bulls a little too much respect," Koch said in a release from the club.

“You cannot go anywhere in this league and not play and give everything for a full 90 minutes and expect to get anything out of the game. The first 45 minutes was a challenge and we had a momentary lapse in concentration to allow the Red Bulls to score a goal ... The response in the second half was excellent. It was exactly what we needed and something we’ll have to build on. But we have to come out and play with a required intensity for a full 90 minutes.”

FC Cincinnati had a 6-3 edge in shots in the second half, but Luis Robles had his first shutout of the season and 64th overall.

Koch didn't fault goalkeeper Przemysław Tytoń, in his first game back since the March 2 opener, for the lone Red Bulls goal.

“There’s not too much he could’ve done on the goal, unfortunately. But for his first game back, he did a good job,” Koch said.

Connor Lade scored in the 38th minute after Daniel Royer trapped Brian White's header pass and flicked it off his back heel to the charging Lade for a blast into the upper left corner.

Tyton missed five matches while recovering from hamstring tendinitis that began during preseason.

Koch made four changes to the starting lineup from FC Cincinnati’s most recent match against Real Salt Lake on April 19. Besides Tyton, Justin Hoyte, Emmanuel Ledesma, Kekuta Manneh were shifted into the starting lineup, while Mattocks, Allan Cruz, Alvas Powell and goalkeeper Spencer Richey were dropped.

Fanendo Adi, who had just recovered from an ankle injury but pleaded guilty to reckless operation last week, did not make the 18-man matchday roster. Adi was charged with OVI in March.

Leonardo Bertone and Kendall Waston picked up their fourth yellow cards of the season, putting them both on disciplinary watch.

FC Cincinnati, on a three-game, eight-day road trip, needs to start making its own good luck Wednesday night in Philadelphia against the Union (4-3-2).

"Seeing how many times the ball hit the crossbar and those things, you feel like, ‘Ugh!’ " said defender Kendall Watson. "We just need that little bit of luck.

“If we start every game the same way we did in the second half, we are going to have more chances to win than to lose. We’ve just got to continue fighting and the minimum thing is we have to show that we find a togetherness. Second half, we did it.”