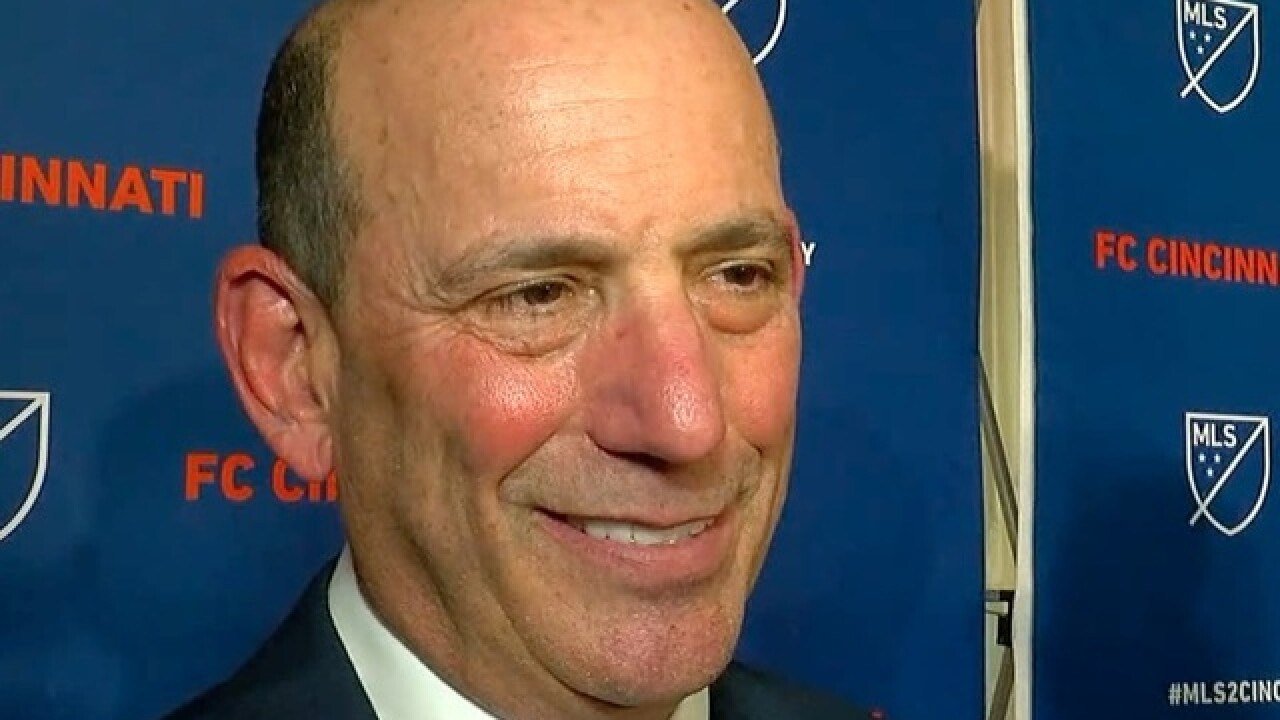 Copyright 2018 Scripps Media, Inc. All rights reserved. This material may not be published, broadcast, rewritten, or redistributed.
Ramsay Fulbright | WCPO
<p>CINCINNATI. May 30, 2018. Major League Soccer Commissioner Don Garber was at Rhinegeist Brewery in Over-the-Rhine to announce FC Cincinnati would join the league.</p>

CINCINNATI – The Major League Soccer commissioner revealed to WCPO Tuesday what held up FC Cincinnati’s approval for so long and painted a bleak picture for the prospects of saving the Columbus Crew.

VIDEO: My interview with @MLS's Don Garber. What took so long for @fccincinnati's bid? And what about #Columbus @ColumbusCrewSC? @WCPO pic.twitter.com/l66nrn5nLG

Commissioner Don Garber acknowledged that he and the league preferred the West End as a stadium site and rejected FC Cincinnati's other choices, Oakley and Newport, leading to nearly six months' of hassling before the soccer club could win over community interests.

“We looked at a site in Kentucky. We looked at site in Oakley. We went out there and said, ‘That just doesn't feel like the character of this fan base,’” Garber said. “When I walk around and I see these fans, it makes me feel like I’m in this urban rebirth, and the OTR-West End section with coffee shops and so many cool, hip environments is very much the character of our league.”

FC Cincinnati had proposed Oakley when it submitted its bid to the MLS expansion committee on Dec. 6. That’s when FC Cincinnati’s bid hit a snag. MLS ended up choosing Nashville as the first expansion team in this go-round and sent Carl Lindner III’s group back to the bargaining table.

“We pushed Carl and the mayor and the city council to help Carl get that site. And that‘s what took so long,” Garber said.

Garber said that was the only holdup, but it was a big one. FC President and General Manager Jeff Berding was hard-pressed to work out deals with the Cincinnati school board, West End residents and Cincinnati City Council to sign off on a West End stadium. The last deal didn’t come together until nearly 1 a.m. on May 17, and that was after nine hours of talks.

Garber appears to be holding out less hope for a deal to keep the owner of the Crew, one the original 10 MLS franchises, from moving it to Austin, Texas.

Garber said Columbus needs what FC Cincinnati has – particularly local owners, corporate sponsors, a large fan base and a new stadium ready to jump off the blueprints.

“Putting the lawsuit aside, our people have met with the mayor and the head of the Columbus partnership as recently as a few weeks ago trying to see is there a way that team could stay in Columbus,” Garber said. “Is there an ownership group that could come together and partner locally? Is there a stadium site that could be dramatically different than the one that they have now, which long-term is not sustainable? Is there a way the partnership can deliver the kind of corporate support that this team (FC Cincinnati) has playing in a lower division?”

“The Mercy deal is one of the top sponsorships in Major League Soccer,”  Garber said. “Those are things that need to happen for that team (the Crew) to be viable.

“There is a lot of discussion going on, but at the end of the day, as much as commissioners don’t like moving clubs, you have to be viable and you have to have ‘this here,’ which we don’t believe we have at the level we need to have in Columbus.”

Crew owner Anthony Precourt said he’s determined to move the club to Austin, but only if he can find the right site for a stadium.  And Precourt has encountered similar resistance to what FC Cincinnati first met in the West End.

Precourt said Columbus’ stadium, opened in 1999, is too old and the team doesn’t draw enough fans to be profitable.

Attorney General Mike DeWine and the City of Columbus sued to stop the move, citing a 1996 state  law enacted after Cleveland Browns  owner Art Modell moved his NFL team to Baltimore. The law says no professional team that gets public assistance or uses public facilities can leave town without giving six months’ notice and providing locals an opportunity to buy the team.

Crew fans have been fighting to keep the team, using the hashtag #SaveThe Crew to try to drum up support.

Precourt and MLS asked the court to throw out the suit, claiming the law is unconstitutional.

“We don’t believe it’s a lawsuit with merit. It’s something we’re addressing and responding to,” Garber said.